How do I add magnets to the mechanism of my exercise bike?

I have an exercise bike that works by a (I'm assuming solid iron) flywheel and a 'horseshoe' of magnets that are moved in and out to set the difficulty.

I have attached an image of the same design found on Google Images so you can see what I have: 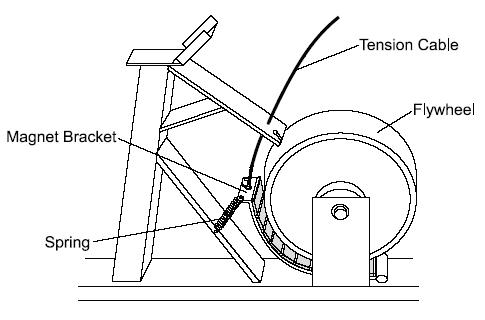 What I want to do is make the bike harder to pedal. For this, I have bought a bunch of neodymium magnets online, after reading that they were the strongest magnets you can easily get.

I bought a bunch of circular ones and smaller flat ones. I've routed an 'arm' out of MDF to screw them onto - so far I've only done the circular ones but I would have gone on to try the flat ones as well. I've illustrated what I'm doing here: 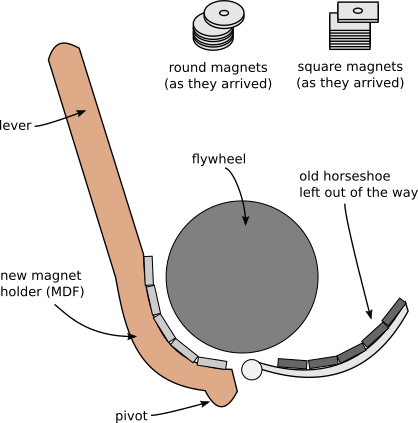 So I'm using the MDF arm as a lever to move the magnets in and out in the same way as the horseshoe would. The idea is to test the concept before I go messing around with the real horseshoe.

And I'm glad I tested it because so far, nothing is working as I would intuitively expect. The magnets have no effect at all on the flywheel!

magnets bicycles
Share
Improve this question
edited May 29 '19 at 15:30

I've designed magnetic brakes like this and have had no issues with a setup similar to yours.

I think the system will work even without a special arrangement of magnets.

My guess as to why it's not working, is that the magnet bracket may be made from iron, and may be concentrating the flux on the old system, improving it's power compared to your new one.

I would gather more data by having someone spin the flywheel, then (carefully) holding a magnet near it. You should be able to feel the drag force and get an idea of what's happening.

The gap will need to be very small, is your new gap as small as the old one?

if you fix/glue the magnets to the flywheel spaced equally apart and have a coil of wire wound around an iron core close to it you have in effect a generator.

Short circuiting the ends of the 2 coil wires will cause a resistance to the pedal effort and in effect a brake that is variable if you also have a variable resistance in the coil wires.

A 2mm gap between the magnets and the coil face will be sufficient to generate a reasonable amount of electricity which can be controlled by the variable resistance.

You "could" have a fair bit of heat generated in the coil of wire when the electricity is almost a dead short so I would advise having a load in the circuit in the form of a 240 volt 60 to 100 watt light bulb (by experiment) to safely burn off the power as a light source......no cooling fan needed. Ian.

Not the answer you're looking for? Browse other questions tagged magnets bicycles or ask your own question.

3
How is the attractive force between two magnets changed when they are separated by non-metalic solids?
2
How to calculate the maximum spacing between Hemholtz coils?
4
How to 'smooth/flatten' the surface of a disturbed liquid without contacting it?
2
How do I separate these powerful magnets from their base plates?
1
Can you make the magnets rotate inside the coils of Brushless motor?
1
How does the magnet sheet sliding metal mechanism work?