A recent news item featured this photo of a WW2 bomb being prepared for detonation.

Can anyone identify the purpose of the large widget sitting on the bomb? it's got a lot of cooling fins on it, and there appears to be fan on the right hand side. There's also what looks like an earthing cable in the foreground and what might be a power cable in the background, so my guess is that its either a heater, or a cooler.

But I'm just guessing. Does anyone know what it really is and what it's supposed to do? 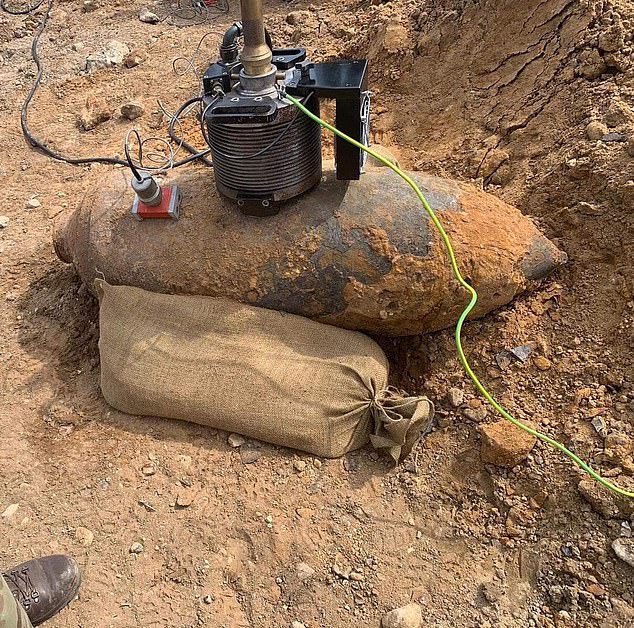 Since there are no answers in the last 9 months, how about a guess? The Widget is a coring drill and an electromagnet. The electromagnet holds the drill against the bomb casing during the drilling operation. The cooling fan cools the fins around the electromagnet. The copper colored shaft is the drill head which can drill only as deep as allowed by the collar (looks like about 1 inch max.). After drilling, the Widget would be removed (looks heavy, thus the two lifting handles) and the bomb could be back filled with acid to neutralize the internal explosives, arming mechanism, etc. I would think this method might be used in an urban area where it is expedient to neutralize the bomb rather than attempting to move it to a save detonation area.

0
How to make a clamp for this motor to move it in two directions?
0
What is the name and purpose of this Instrumentation / Mechanical fitting
0
Identify bearing dimensions from its bearing number
0
What is this object?
2
What is this mechanical pump called?