what happens if starting arm of starter does not return to "OFF" position after a temporary supply failure?

Schematic Diagram of a Manual Face Plate Starter is shown for a DC Shunt Motor.

From Quora: If the field from a DC motor is removed, what would happen? Original Source: Electrical Machines And Power Systems by Wildi. 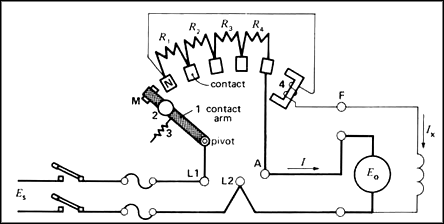 The resistors limit the LR current to 1.5 to 2 times rated current.

Factor in Counter EMF $E_o \ne 0$ as rotor starts to move and the removal of resistors as contact arm moves clockwise means armature current builds up in a controlled manner to rated full-load current (if driving full-load).

When the steel contact arm gets to the electromagnet, it is held in place until field loses power, for example when the power is disconnected. Then spring 3 should bring it back to contact M.

Answer time: If the arm does not return to starting position, then the armature current that flows is governed by where the arm is. The Starter is mechanical and things fail.

If it stays on the last position, then LR current is:

This could be 5 to 8 times normal full-load current. The resistance of the armature winding $R_a$ is small, which could (from Wildi):

a. Burning out the armature;

b. Damaging the commutator and brushes, due to heavy sparking;

d. Snapping off the shaft due to mechanical shock;

e. Damaging the driven equipment because of the sudden mechanical hammerblow.

There still may be damage, but less than with no resistance.

11
Defining the heap and stack size for an ARM Cortex-M4 microcontroller?
6
Remote start on a car with manual transmission
1
Fast and quitet linear actuator for lifting less than a kilo
2
Suggestion to control a gimbal bldc motor for positioning
3
Planned power outage and backup generator
0
Cheap electrical motor that can spin freely in both directions when unpowered
4
Starter direction for methanol engine
2
Determining the torque needed for a servo motor