How to control precisely the wall temperature of a tubular reactor?

I have modelled a multi-tubular reactor performing a Fischer-Tropsch synthesis of alkanes and I was wondering about the stability of such a reactor. Even a very tiny deviation of the wall temperature can lead to a potential destruction of the catalyst if not more...

The Fischer-Tropsch synthesis I am modelling as an adiabatic temperature around 1200 K. This is the result I get when the wall temperature varies from 201.000 °C to 201.470 °C. 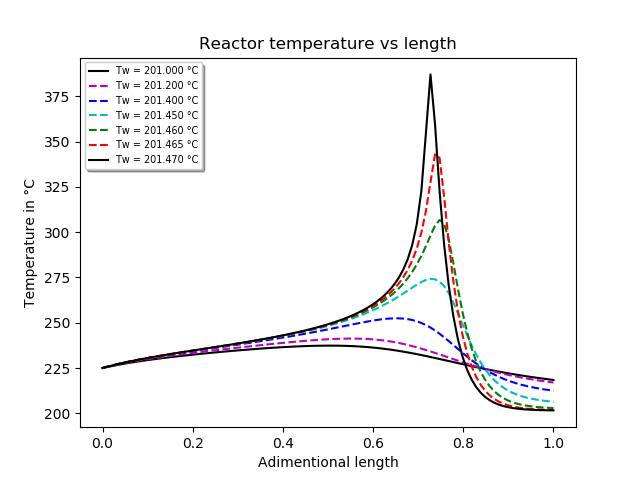 So theoretically a variation of less than 0.5 K can lead to a reactor temperature variation of more than 150 K.

How to control the temperature along the reactor (it can be more than 10 meter long) as precisely as let 0.1 K say of difference to avoid such unpleasant drift leading to a potentially bad situation?

heat-transfer chemical-engineering heat-exchanger
Share
Improve this question
asked May 17 '19 at 23:09

I've had this problem before, albeit not with such a tight temperature range.

I would recommend immersing the reactor in a fluid with high thermal mass, then I would circulate and temperature control the fluid. The circulation will minimize the effects of temperature differences.

Water is ideal, but dangerous since it would have to be under pressure, and it would explode into steam if there was a breach. Oil might work fine.

Not the answer you're looking for? Browse other questions tagged heat-transfer chemical-engineering heat-exchanger or ask your own question.

5
Baffle vs Bottom Temperature Measurement/Control
5
How to model heat transfer through a pressure vessel wall if the reservoir temperature is not constant
5
Dynamic mass balance in plug flow reactor
4
How does one calculate degrees of freedom in a reactor with parallel reactions?
1
Nusselt number definition for a constant wall temperature
1
Define inlet temperature in multi-stage adiabatic reactor
0
CSTR properties - What happens to conversion of products if I change the reactor size?
0
the volume in hydraulic retention time is of reactor/container or liquid
1
Modelling reactor jacket with or without insulation, how to proceed?