I'm designing a solenoid valve for an automated irrigation project that I'm working on. After having looked at some designs, I have a question. 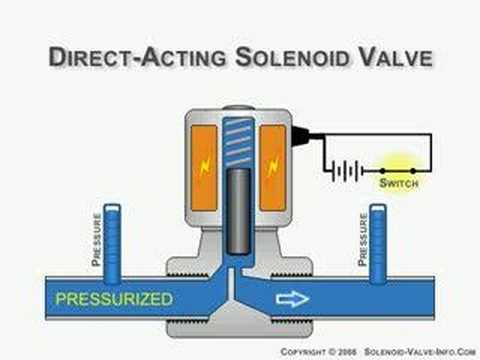 For most of the designs I've seen, the orifice is smaller than the pipe diameter. Wouldn't this reduce the flow rate? If this is the case and if I'm using such a design, do I make that opening bigger?

A valve that is smaller than the pipe diameter will reduce the flow rate, but so will any valve. When calculating what sort of pressure/head loss (pressure and head are equivalent) a system will have, there are two contributing factors: major losses and minor losses.

Because these losses are expressed as head, they are in units of length. $\lambda$ is the friction factor, which is a complex number that varies based on the type of flow (laminar, turbulent, transitional) and then the Reynolds number and tube roughness. That's a topic worth exploring elsewhere, but isn't directly related to your question. $l$ is the length of straight pipe, $d_h$ is the hydraulic diameter, which for a circular pipe is the actual diameter. As pipe shape changes, there are different expressions for hydraulic diameter. $v$ and $g$ are flow velocity and gravitational acceleration, as you would expect.

The second equation is the one we're really looking at though. This is how you calculate the head loss across the valve. $\xi$ is the loss coefficient, and $v$ and $g$ are the same as above. The only way you can get loss coefficients is by looking them up or by calculating them empirically, if values don't exist for your components.

We also have to account for the change in overall diameter of the pipe though. This can be done a couple ways, depending on how the pipe diameter changes. If it's sudden, it's probably best to treat it as another pipe feature which will cause a pressure drop.

In a more gradual change, you will have some head loss, but the bigger effect will be the narrowing diameter increasing the velocity of the flow. This is a fairly trivial result of conservation of mass. The mass flow rate in and out must be the same, and if we assume constant density (reasonable for liquid water at speeds under 450 m/s {1000 mph}), then we'll see that velocity varies inversely with cross-sectional area.

Ultimately, standard designs are standard for a reason. The valves constrict a bit, but they don't bulge out more than necessary from the rest of the pipe.

Most equations referenced from Engineering Toolbox

The total flow resistance is the sum of its parts. Pipes are long, valves are short. Making a pipe wider is relatively inexpensive, and making a valve wider is relatively expensive. As you make the opening wider, everything about the valve has to be beefed up, as the forces involved will scale along with the size of the opening. So on balance, youd always expect valve openings to be smaller relative to pipe dimensions, in a cost optimized system.

Not the answer you're looking for? Browse other questions tagged fluid-mechanics pressure valves or ask your own question.

2
Fluid dynamics: valve and pressure drop
2
Pipe-network pressure - mass flow relation
0
How to maintain a static negative pressure in a valve?
2
Do pressure regulators restrict the mass flow rate?
0
How to calculate flow coefficient to choose a pressure regulator
3
Effect of bypass valve on flow rate and pressure
4
Divide Flow and Maintain Pressure
1
Can air flow occur in both directions in a 2 way solenoid valve?
1
What kind of solenoid valve should I use for vacuum?