Determining the direction of internal forces in a truss

I am learning the method of joints, but there's no explanation on how to figure out the direction of internal forces in my course.

How do you know that BA is tension and BC is compression? 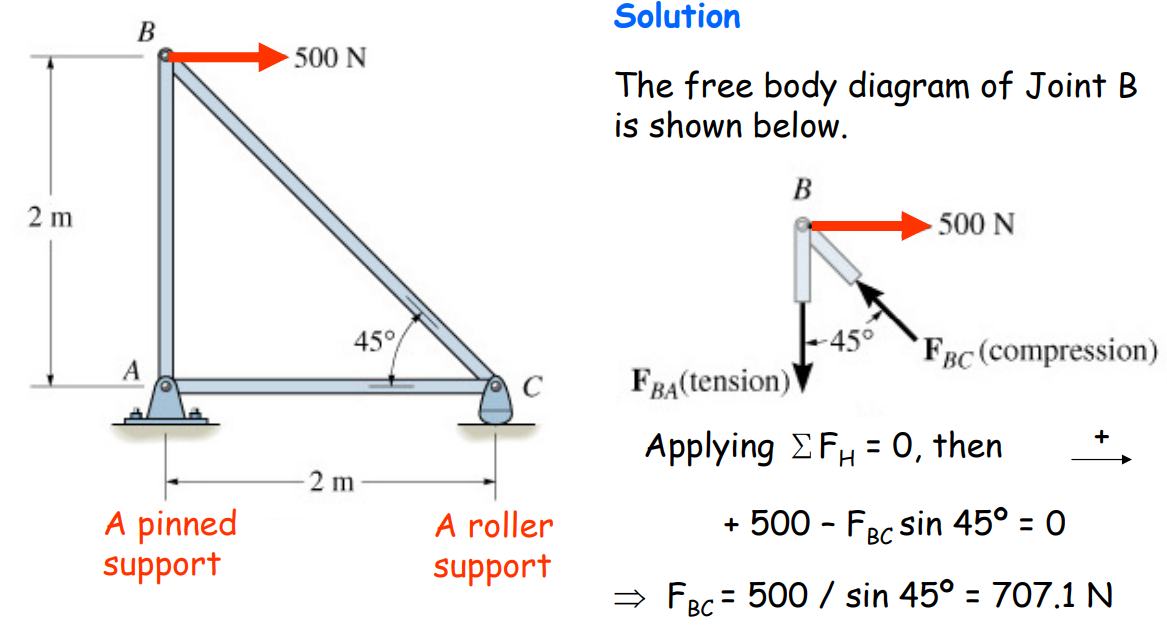 There are a few ways of doing it.

Just math it out

This basically means doing all the calculations paying attention to your sign convention and seeing what the final result is. In complex cases, with a large truss dealing with many loads in multiple directions, this is the only real option.

For a simple truss such as this one, though, there are two easier ways of doing it via inspection:

This method is basically just looking at the deformed configuration under load. Feel free to exaggerate as much as you need.

In this case, you have a horizontal load at node B. This force is going to try to move B rightward. Let it. In fact, lets pretend that force moves B a full meter to the right (remember, exaggerate!), such that the truss becomes an isosceles triangle.1 Now consider what that does to beams AB and BC:

The numbers themselves are irrelevant (after all, they're based on a made-up displacement of B). All that matters is that AB got longer and BC got shorter. No matter what the real displacement of B is, this will always be the case: AB gets slightly longer, BC gets shorter. Which tells us that AB is under tension and BC, under compression.

That's the basic gist of this method: look at the expected deformed configuration and see which elements get stretched (tension) and which get squeezed (compression).

The last way is to look at the individual nodes. The equilibrium diagram in your question (just the arrows, ignoring the values) is a cheat-sheet: all arrows pointing towards the node (such as the one representing BC) are compression, those pointing away (such as AB) are tension.

The way to see this is to think in terms of Newton's Third Law: the node is applying a force on the beam, and the beam is applying an equal and opposite one on the node.

If a beam is under compression, the external force it feels is pointing inwards (think of a column with a downwards force above and an upwards reaction force below). Therefore, the column's reaction points outwards from the column... which is "towards" the node.

Likewise, a beam under tension feels outward-facing external forces, so its reaction points towards the column, and away from the node.

Therefore you just need to figure out the direction for each of the arrows in the node diagram.

In this case, you have a rightwards external force at B. Only BC has a horizontal component, so it has to be solely responsible for countering that force. That happens by making BC's horizontal component point towards the left. That being so, BC's vertical component must point up, since BC's resultant force must be purely axial and therefore parallel to BC's inclination. Since that resultant will point left-and-up, it's pointing towards the node and is therefore compression.

Given that, the node now has an upwards force which must be countered by AB, which must point down. Since that makes it point away from the node, it must be tension.

1 In reality, there'd also be some vertical movement, but it's much smaller than the horizontal and can be safely ignored for this thought experiment.