Is stress a vector or scalar?

I have seen some theories saying stress is a scalar. I don't understand why. Anyone can explain.

mechanical-engineering stresses
Share
Improve this question
edited May 7 '19 at 12:53

As a mechanical engineer, I've come across the stress being represented mainly as a second order tensor, the Cauchy stress tensor, however vector representations are also common. As for scalar representations? This might be common in scenarios of uniaxial stress, such as a bar under uniform tensile stress, where there is only one component of stress.

In general, for a given coordinate system $O(x,y,z)$, there are 6 components of stress:

Let's consider a solid object of arbitrary shape. It can be a beam, a brick, a gear, etc. In general, the stress will vary throughout the solid. 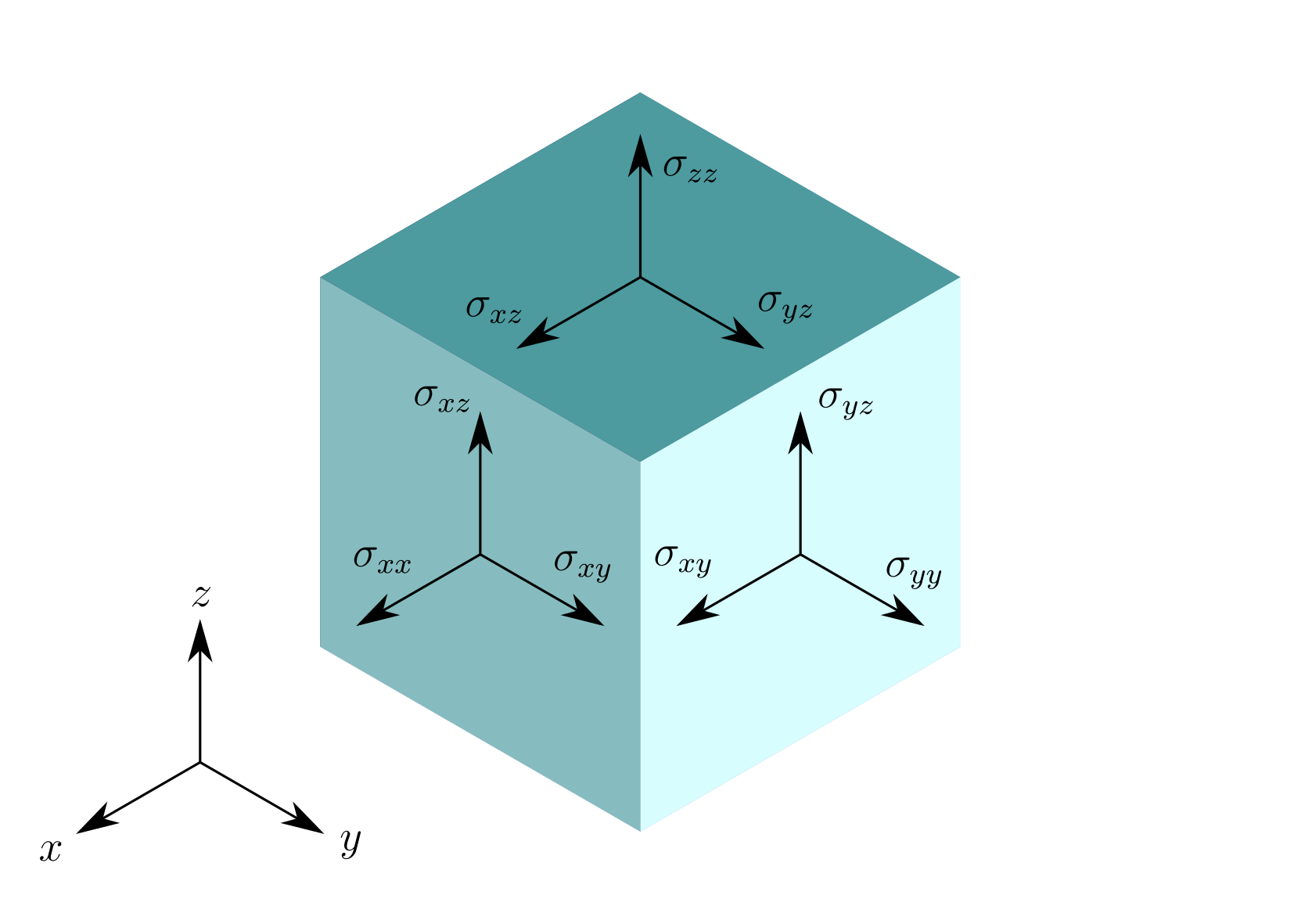 Six faces, each with three stress components, might suggest a total of 18 components. However, balance of forces (stress $\times$ infinitesimal face area) onto the cube means pairs of stress components on opposite faces are equal and opposite ($\rightarrow$ 9 unique components).

Therefore, at any point in a 3D solid, the stress state is fully described by six numbers:

(Frequently, shear stresses (but not normal stresses) are alternatively expressed as $\tau_{ij}$ instead of $\sigma_{ij}$)

A natural means of expressing this stress state is as a Cauchy stress tensor:

or, equivalently, to highlight the symmetric nature of the stress tensor as well as using only the 6 unique components:

In 2D stress problems where, say, stresses in the $z$-direction are not of concern, this tensor is often reduced to

The advantage of the Cauchy tensor is that it is possible to re-express the stress components in a different frame of reference $O(x',y',z')$ by performing a change of basis on the tensor. This is done by performing a matrix transformation on the array of elements $[\sigma]$ to obtain the array of stress components in the new coordinate system $[\sigma']$. That is, if a vector with components $[a]$ expressed in $O(x,y,z)$ is related to the components $[a']$ re-expressed in $O(x',y',z')$ via the equation

where $[Q]$ is an orthogonal matrix, then the Cauncy stress tensor elements in both systems are interrelated by

There is nothing stopping you from re-arranging the 6 stress components into a 6-dimension column vector, such as

This is convenient for expressing material laws in linear elasticity problems, as in this form, the stress vector is related to a similarly defined strain vector via multiplication with a $6\times 6$ constitution matrix (as opposed to the stress tensor being related with the strain tensor via appropriate multiplication of a fourth order tensor!). However, re-expressing this vector in different coordinate systems is not a readily available action. A transformation matrix $[Q]$ cannot be used directly here, least to say that $[Q]$ is a $3\times 3$ matrix, and the stress vector here is $6 \times 1$!

In the first case, we used the unit cube to describe the stress state at a point by observing the faces of an infinitesimal cube. An alternative way to examine stress is to analyse how the stress act on an imaginary surface at that point. Imagine now that we cut the solid body about a plane that passes through the point, and the plane has a normal vector 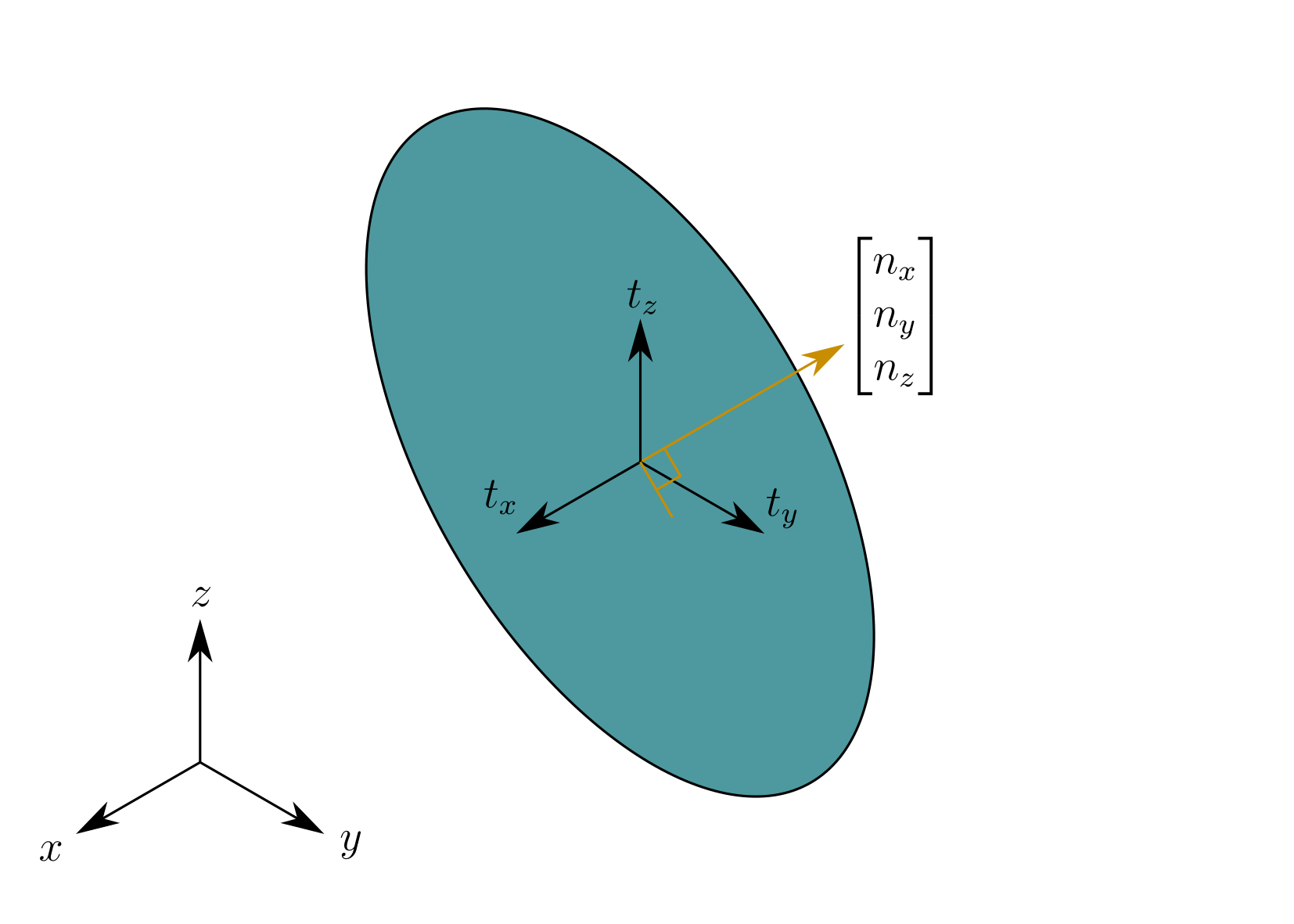 Now let's analyse the stress that act on this plane at the point of interest.

Like for the case of the cube, three perpendicular components of stress act on the cutting plane, and these are

In fact, the total stress acting on this surface can be represented as a vector, in the form

To define our stress vector, we had to cut at a plane to obtain a surface on which to describe stress. However, what happens if we consider a point on the outer surface of our solid? A similar vector can be computed by considering the force per unit acting on the outer surface of the solid, but, as a mechanical engineer, I would argue that this vector is called a traction vector instead of a stress vector at this point, since now this vector arises due to external forces rather that internal. Stresses are internal forces per unit area, whereas tractions are external forces per unit area. However, this is just a matter of terminology, and other disciplines may use different terminologies.

Stress can be expressed as a vector or a tensor. Stress can only really be described by a scalar for simple uniaxial stress problems.

Not the answer you're looking for? Browse other questions tagged mechanical-engineering stresses or ask your own question.

0
Residual Stress Theory
4
Nylon brittleness as function of moisture content
3
stress curve in the notch effect?
6
Why do stress concentrations really occur?
0
Engineering stress and true stress
4
Why is the Stress vs strain diagram preferable to the Load vs displacement diagram?