How to get the bending moment for tie member? 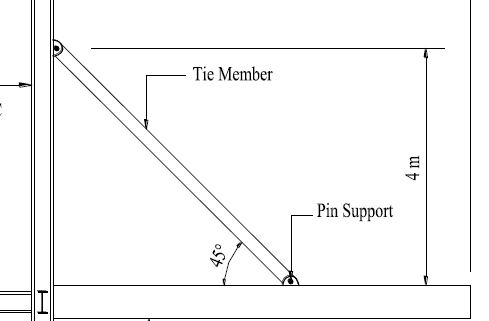 You say "[t]he tension force was found to be 18.2kN". I assume you were the one who got this result.

If you did, you will have noticed that this force is perfectly parallel to the tie's longitudinal axis and that there was no perpendicular (transversal) component applied to the tie on either end.

As such, we can look at the tie in isolation and rotate it to make it horizontal. What we then have looks exactly like a simply-supported beam (since the tie's pinned connections allow rotation but not displacement). It just so happens that beam has no transversal external loads (concentrated forces or distributed loads).

What's the bending moment for a beam with no transversal external loads? Well, it's just zero. The beam suffers no bending moment. You're done.

The only potential wrinkle is the fact that everything in the world has at least one load applied to it: its weight. Though it's not shown in your image, that tie does have to support its own weight. That weight will be pointing straight down, so it can be decomposed into a parallel and a transversal component. The parallel component will alter the tie's axial load (it will actually vary along the tie's length), while the transversal component will generate bending moment. Once again, the comparison to the simply-supported beam applies, and the bending moment diagram will be identical to the one for such a beam, just remember to calculate it using only the weight's transversal component, not its totality.

That being said, since ties are theoretically meant to be axial-only and since their self-weight is usually much lower than the loads applied to the entire structure, it is very common to calculate the ties' weight and apply them as concentrated forces at the endpoints (half to each node, of course). This will give an accurate description of the axial force but will eliminate the bending moment on the assumption that it's negligible.

For your question, if the weight (or density, through which you could calculate the weight) wasn't given, then it's probably fair to assume the teacher wants you to disconsider the weight, in which case the tie's bending moment is simply zero.

While the term 'tie-member' is typically used to describe an axial only link member, you must consider any loading effects. As you have shown it in the image it looks like a simple link. But just because the terminology suggests that the member is axial only does not necessarily mean that it is.

Any other connecting elements or applied loading could bending of the member. So you must identify any other loading that may be applied to the element.

Also a bending moment can be generated by axial forces that have eccentricity. If your connections are off center, then there would be some bending moment due to only the axial load.