Dominant parameters in the dynamical response of a linear oscillator

I am working with a very simple 3-DOF damped LTI spring-mass system. As an exercise I am altering two parameters simultaneously (stiffness and damping coefficients connecting mass 1 to mass 2) to see which combination minimizes:

The objective is to determine which parameter has the greater effect on the performance, either the stiffness or the damping.

My question is: How can I determine if changing stiffness or damping is having more of an effect on the aforementioned criteria ? Is there a way to quantify how they contribute to the performance ?

From what I understand from the question and your comments, you can write the equations of motion of the 3-dof oscillator in the form:

where the vector $x$ represents the displacements, $M$, $C$ and $K$ are the mass, damping and stiffness matrix respectively, and $f$ is some forcing vector (e.g. impact, step function, etc.). Therefore, this type of equation may be classified as a Linear Time-Invariant (LTI) system.

There are several ways to solve this type of LTI systems, for instance numerical time integration, and as mentioned in the response by @am304, different models to represent the damping matrix $C$.

Rayleigh damping is indeed one form:

where parameters $a$ and $b$ are chosen arbitrarily. You could also use modal damping, which is similar and may be written in the form:

where $W$ is a diagonal matrix containing the linear eigenvalues of your system, $V$ the associated eigenvectors and $x_i$ is the damping coefficient (which may vary from mode to mode but can be considered as a single constant as a first approximation). The main advantage of this method is that the damping carries with it the inherent dynamics of your linear system and is diagonal in the modal domain.

In terms of performance, with respect to the overshoot and the settling time, they will be both dependent on the damping term as well as the stiffness, since the two quantities are related in the two modeling strategies here proposed. However, for a given stiffness matrix, the solution will reach a steady-state with a specific amplitude, and the overshoot and settling time will solely depend on $x_i$ as shown in the picture below (Last mass displacements for: $x_i=0.2$ (blue), $x_i=0.5$ (red) and $x_i=0.8$ (black)). 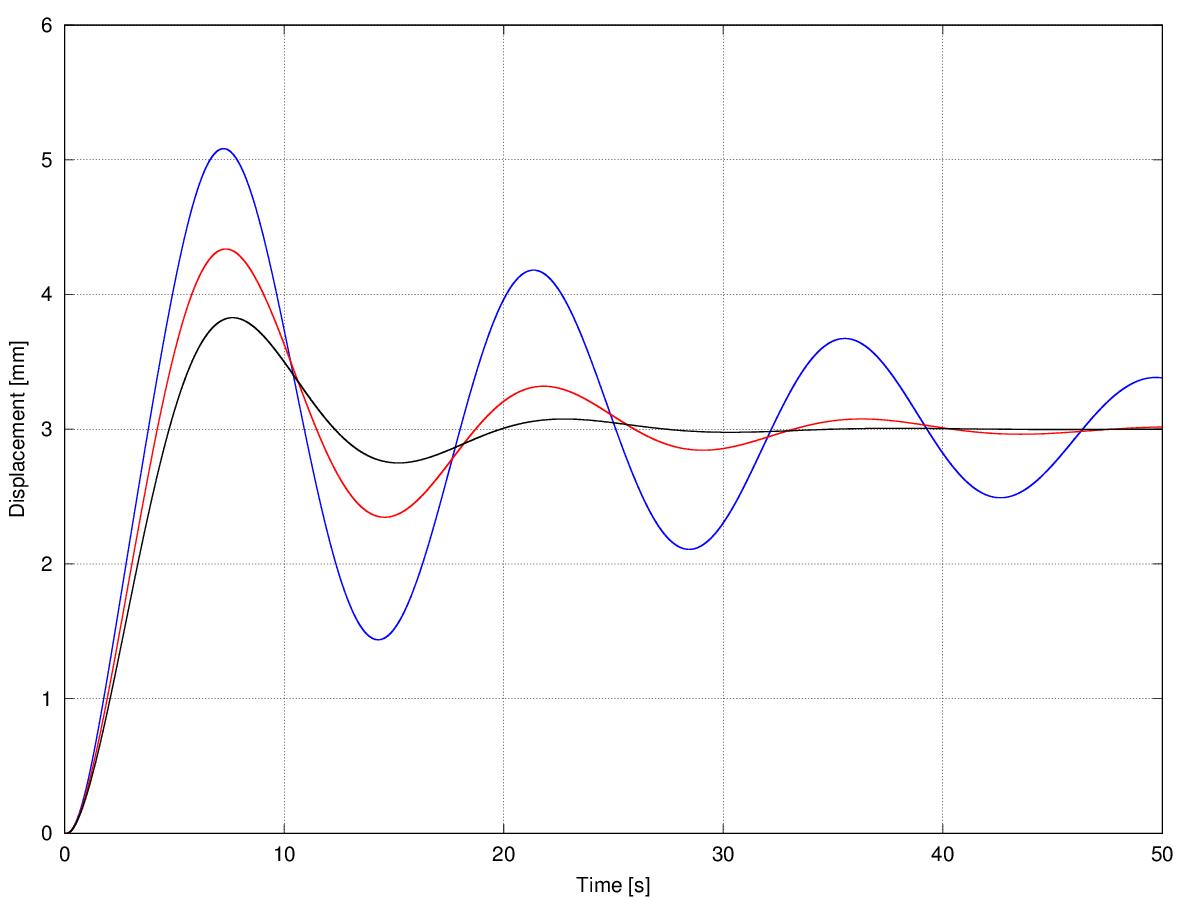 The main effect of changing the stiffness will be on the natural frequencies of the system, the effect on the damping will be secondary in my opinion. There are plenty of damping models available out there (e.g. hysteretic damping), and modelling damping is more of an art than a science, but the most basic damping model is viscous damping, where the damping coefficient is proportional to the relative velocity of the masses.

For an in-depth study of damping models see Damping Models for Structural Vibration.

Not the answer you're looking for? Browse other questions tagged dynamics springs vibration stiffness or ask your own question.

3
How do I create a graph of the phase angle and response of a harmonic excitation in Matlab?
0
How can I validate the validity of a model of a dynamical system?
1
Is the Spring Rate for a Belleville Spring Linear?
2
Are the modal participation factors bounded for shock response spectrum analysis?
2
How to determine the linear and angular velocity of one end of a rod that is pinned on a track on each side?