Unusual idea for fish tank design. Unsure if plausible or not

I looked through the stack exchange list of sites, hoping to find one more suitable for my question, but decided that this was the most likely place to get the answer I'm looking for. I'm not an engineer, but I'll try to explain myself as clearly as possible. Here's the set up: Two fifty-five gallon fish tanks, each on a metal shelf stand. Each tank has two holes (drilled or cut out, idk, and wouldn't mind having the neccessary steps for this explained) in their glass floors. There are corresponding holes drilled through the metal shelves that they sit on. Two U shaped glass tubes seem to hang under it, one bigger than the other, so the smaller one is above it. One end of each is set securely through the holes of one shelf and the holes of one tank, same on the other side (picture to better explain). The idea is that, when both tanks are filled with water, the tubes would fill, too, and the fish would be able to use them as highways, so they could swim freely from one tank to the other. I'm not sure how the tubes could be securely connecting, though I was imagining in the same way that the walls of the tanks are connected (I think it's glue, not sure, clarification welcome). Also, a friend proposed the problem of pressure from the water above being too much on the tubes. I really just want to know if this is doable. And, if doable, but there are some glaring obstacles, to have them explained. Thanks in advance and sorry for disrupting the well-versed engineer-y air of the site. (Side note -just because I'm intruding: This is actually an idea I came up with for a tank set up in a novel I'm writing. I've lived around fish tanks, but have never actually tried doing anything remotely like this with them- not sure how to put that. Anyway, thanks again.) 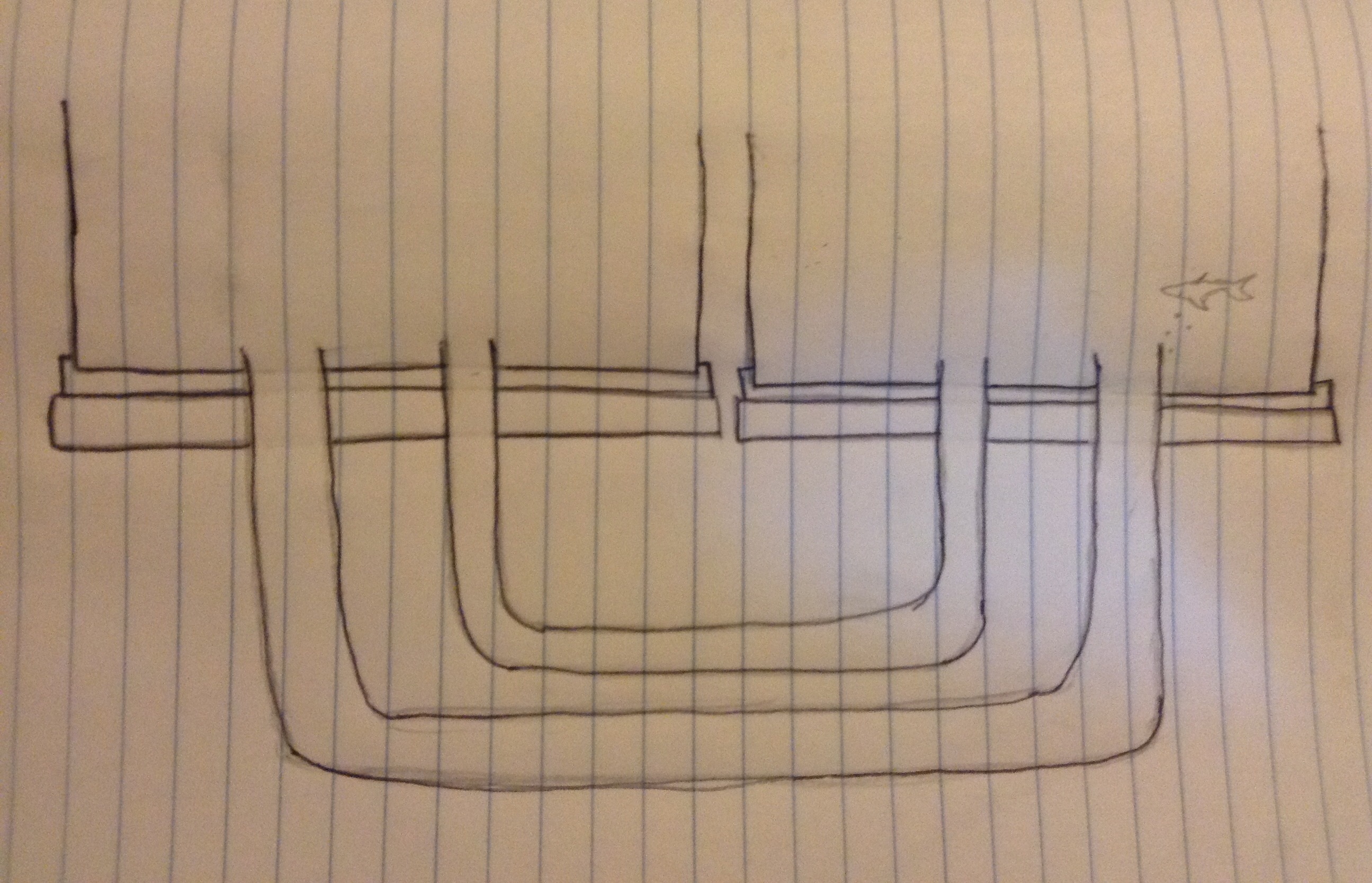 The siphon proposal sounds better, but the tube would soon accumulate air and have to be frequently refilled with water.

If you really want to put holes in your tanks (and risk destroying them), I'd suggest putting the holes an inch or so below the water line. That would eliminate the problems of high pressure, dirt accumulation, and air in the siphon.

Your biggest concern will be how to ensure that the seals are strong and flexible. Eventually someone (even you) will accidentally bump into a tube. You really don't want the tube to crack or the seal to leak.

I was about to say it sounds like an interesting idea, like a Habitrail for fish, and then I googled it and found an interesting fish habitrail video

It uses the siphon suggestion. If you look at the video you can see the air accumulation problem starting, but I think that could be mostly eliminated if you could arrange for continuous water circulation between the tanks (e.g. a common external filtration system taking water from one tank and returning it to the other).

You could make the tubes longer and have the tanks separated farther apart.

It certainly seems like a better idea than potentially destroying two tanks.

This is possible, but the stress concentration around the holes in the tank bottoms will probably cause them to crack and fail catastrophically! Here is an easier way:

Instead of connecting the bottoms of the tanks, simply invert your bent tubes, fill them with water, and place one end of each in each tank to form a siphon. Fish can swim up into the water-filled tube, traverse the gap between tanks, and then swim down and out of the tube in the next tank over.

Yes, you can do it by either using flex silicon sealants or some rubber compression washers like those commonly used in copper tubing.

Your supports have to be solid and offer easy access to the bottom for maintenance of the pipes. The pipes on the suspended part have to be supported by strong but flexible brackets.

It is common for tanks intended for salt water to have holes with bulkhead fittings. The bulkheads normally come with NPS threads in the US. It would be just a matter of connecting them the way you want ; clear flexible hoses would be best. Tanks would need to be ordered with the size and location of the holes specified as it is not reasonable for an amateur to cut the standard tempered glass bottoms. Apparently one would not have gravel in these tanks.

Not the answer you're looking for? Browse other questions tagged pressure or ask your own question.

1
What is the criteria for bubble entrapment in a closed headspace tank set to drain?
6
Is it useful to stuff my glasses with newspaper to protect them?
2
What are the design difference of a steel tank that would withstand 136atm inside and 1atm ambient compared to 1atm inside and 136atm ambient?