How to design a narrow bearing that supports shear direction load

I need to connect two flat bars of metal with some kind of bearing that doesn't increase the joint thickness by more than 2-3mm (the less the better), as shown here: 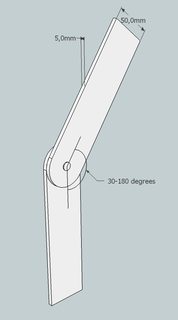 There are almost no axial loads but the peak lateral (shearing) stress on the bearing would be of order of 2000 N with 800 N sustained being the norm and the directions of the stress varies (although axial respective to the lower beam would be most common and strongest).

There is a serious restriction on thickness of the joint - the present 10 mm is already pushing the envelope; another 2-4 mm would be acceptable though unwelcome.

The bars will be steel or duraluminum. There are extra braces, etc., which prevent buckling and limit stress in the perpendicular direction to negligible levels, but the two bars need to carry axial stress and lateral stress "in the thick direction".

Moderate friction is acceptable - 5 N·m friction torque is still a reasonable value. Rotation is moderately fast, at most ~1 rev/s, usually much less. Also the range of rotation is limited; only 30-180 degrees angle between the two bars is needed (and even a little less than that if necessary). Lifetime doesn't need to exceed 1000 hours; less for the prototype.

This will be prototyped using a common DYI workshop without specialized machinery like CNC devices, also preferably no very expensive solutions - of course purchase of a pre-made bearing fitting the criteria would be perfectly acceptable if the price is not excessive.

What kind of bearing or joint would fulfill these prerequisites?

EDIT: Let me add a picture explaining the general layout of forces: 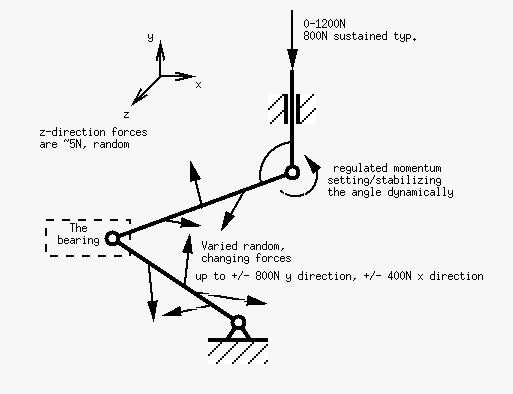 In general situation any common bolt, bushing (with flanged axis) etc. would be sufficient. Here the problem is getting it all to be narrow enough not to extend way out of the narrow plane occupied by the two bars, and not fall apart.

This is one solution for a flush mounted bearing.

You can use a 5 mm wide ball bearing on one leg of it. A ball bearing is preferred here since it more suited for minor thrust loading.

To prevent the bearing from working its way out, it can be cryogenically chilled in liquid nitrogen, and then pressed into place. When the bearing warms up to room temperature it would expand tightly against the metal flat bar causing it to be locked in place.

The same can also be done with the shaft that rides in the bearing, affix the shaft solidly to one flat bar by cryogenically chilling the shaft and pressing into the flat bar. Then press the entire assembly into the inner race of the ball bearing.

Heating the steel flat bar instead of chilling the shaft or bearing can also work for press fitting, as in this case you are expanding the hole beforehand instead of shrinking the part. But to secure the the shaft to the inner race of the bearing by heating, you need to heat the bearing itself, but overheating the bearing will cause it to lose its temper.

If you want to secure the assembly even more you can peen around the outside of the bearing and on the ends of the shaft.

... if weaker attachment methods are acceptable, you can try assembling the parts with red loctite or cyanoacrylate super glue instead of press fitting.

I recommend a sliding contact bearing. It's easy to manufacture and seems to do the job for a prototype, especially if it has to be cheap. Steel seems to be the better choice in this case.

Rather use two thinner bars for one of the links, so you get a double lap. This will reduce the moment on the bearing and yields a more even contact stress distribution. So if you can really spend 3 mm more, you can split into two 4 mm bars instead of one 5 mm.

Use a drill press and a reamer to achieve small clearence. All pieces of the bearing point can be drilled and reamed together. But for the middle bar, the inner one, you may use a press fitting. Thus the bolt will only move on the outer bars where a transition fitting shall be a good choice.

Perhaps you want to invest in bronze sleeves for the bearings. It will lower the friction and result in longer lifetime.

Not the answer you're looking for? Browse other questions tagged mechanical-engineering bearings or ask your own question.

2
Bearing and Bearing Housing for Said Design
6
What is this kind of bearing called
2
What does it mean that a ball bearing can handle thrust load but a roller bearing can't?
1
Blind bearing bore design
2
How does an air-bearing “pre-load” work?
3
Overcoming limitations of a snap in joint
0
Name that bearing!
4
Radial vs thrust bearings for assembling a lift mechanism