How do I best model a torque applied over a non-radial line?

I am looking to use FEA (specifically, Creo Simulate) to re-create the results of a static strength test on a part my company will be testing in our lab. Because the lab results are the ones we will be using to determine the utility and capability of the part, I'm doing this mostly as an exercise, to strengthen my FEA skills and to see how close to reality I can get the results of the analysis to be.

For a couple different reasons (write access to model files, investigation of the bolt functionality of Creo, more realistic application of load) I am attempting to model part of the test stand in addition to the part of interest. The part itself has a flange with a bolt pattern as part of its design, and we are using that bolt pattern to attach it to an adapter. The adapter will attach to the output of the motor, with the torque being applied through a key that sits between the adapter and the motor output.

Below I have a picture of the keyway in the adapter for clarity. The part of interest is attached to the back side of this adapter, the key fits along the entire length of the keyway, and the adapter connects to the test stand output using the four larger bolt holes (these don't transmit any significant torque, they simply keep the assembly together.) 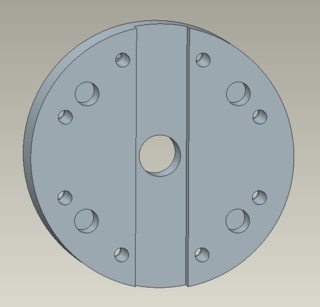 My issue is determining how best to model the applied load on the walls of the keyway. My intuition tells me that the load will vary along the length of the keyway, as what we're really applying is a torque that gets distributed throughout the key.

I would ignore the fact that the keyway makes the actual forces slightly off-center at least when calculating the forces themselves. The forces can be placed at their true locations once they are calculated.

I would also assume that the load is continuously distributed from the center to the outer edge. This assumes that the key is machined with a tight enough tolerance (or deflects/deforms enough) to equalize the distribution. This also assumes that a given amount of rotation produces more force at the extremes of the key than at the center (where it is zero).

From there, it is a matter of finding the maximum force per unit length at the end. 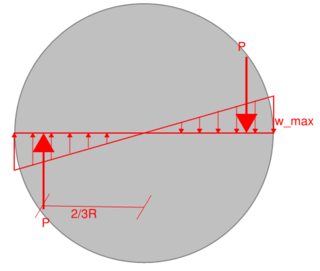 As I have gone through this, I have the nagging feeling that I am missing the point of your question, so let me know if I missed it.

Note also that I am used to working with models where the finer details of the exact load placement does not affect the final results, so I may be making assumptions that are not correct for your model.

6
How should one model a structural model with both line elements and area elements?
4
How to model elastic support in FEM?
1
How could an MGA's frame/chassis best be improved?
3
Computing winch maximum line pull (torque vs lift capacity)
0
How to create a non uniform pressure load in MSC Patran
1
What is your best recommendation to optimize the torque/speed relationship of a motor?
2
how are these radial piston rotors machined
0
When does torque applied on a shaft produce bending and when does it not?
0
Why is plastic deformation a non-linearity if I am using Bilinear hardening to model it in FEA?