How does a microbolometer (IR camera) work?

I am currently doing a project which has led me to my first encounter with IR cameras, and I am therefore quite curious as to how they operate. Specifically, I would like to know the following

There are a lot of questions in your question, and it should probably be broken up into multiple different questions. I don't want to wait until that happens though so I'll address the ones that I know the answers to.

A microbolometer is just a special case of a bolometer which contains a material whose resistance is very sensitive to its temperature. The change in resistance caused by heating from incident electromagnetic (EM) radiation is read out by a circuit similar to what you will find in a voltmeter. These devices can be designed to be sensitive to incredibly low amounts of power, and generally also have a high dynamic range. The ones I've used in the laser industry are sensitive all the way from 10 mW to 100 W, a dynamic range of 104.

Bolometers are known for having incredibly broad spectral bandwidths. Since the device actually measures the heat deposited by the EM radiation, the bandwidth of the detection material itself (usually either amorphous silicon or vanadium oxide) is defined by the wavelengths at which it absorbs. The bandwidth of the microbolometer detectors must therefore be defined with external optics which reject or absorb the other wavelengths. My guess would be that they use an absorbing IR bandpass filter in front of the detector surface.

I don't know exactly, but the ability to manufacture these things en masse only became possible in the last few years while charge-coupled device (CCD) detectors have been in mass production since the 1980's. You are correct that CCD detectors incorporate an IR filter, but the underlying materials are only sensitive down to ~1-2 μm so they don't work in the deep IR like the microbolometers do.

All warm bodies emit radiation across the full range of the EM spectrum. The spectral content of the radiation emitted at a given wavelength is given very nearly by Plank's blackbody curve (shown below). One of the key features of this curve is that the peak of the emitted radiation shifts towards longer wavelengths with lower temperatures. The peak of the emitted radiation is given by Wien's law which is $$ \lambda_{max}=\frac{b}{T} $$ where $b$ is Wien's constant ($b=2.8977721\cdot10^{3}\:\mathrm{m*K}$) and the temperature $T$ is in units of Kelvin. From this you can calculate that the peak wavelengths of the temperatures you ask about are: $\lambda_{1000}=2.3\ \mu \text{m}$ and $\lambda_{400}=4.3\ \mu\text{m}$. So, detectors which are designed to be sensitive to those different temperatures are simply tuned (probably by tuning the bandpass filter in front) to be more sensitive at the different peak wavelengths. 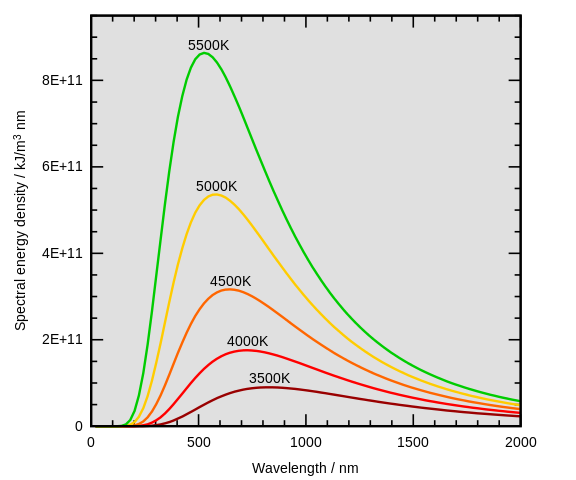 Not the answer you're looking for? Browse other questions tagged electrical-engineering thermodynamics heat-transfer optics temperature or ask your own question.

1
How does the Italian Percolator work?
4
Periscope camera with a mobile phone, how to make walls not visible on the camera/alternative solution?
0
How does Work behave in two different refrigeration setup?
0
How does this mechanical heat click work?
0
How to adjust magnification when mounting camera on microscope
0
What is this part of a camera called?