Why do stress concentrations really occur?

From doing some research I've learned that internal stresses inside an object can "concentrate" on sharp edges, as shown in the above picture. For that reason we often make fillets so that the change in diameter is smoother and we get a smaller stress concentration.

But why does the stress concentrate on sharp edges? From Googling I've found numerous inadequate answers, such as imagining "stress flow lines" getting packed at the sharp edge. Here I can see an analogy to electromagnetism, where we talk about flow lines of an electric field, but what is "flowing" here? What do the lines represent?

Intuitively, I can imagine this: If we press the object on the left in the above picture, there is a higher stress after the edge, since there is now a smaller area enduring the same force. Hence the stress is higher. But this does not explain why the stress concentrates at the edge. I mean, even with the fillet, the radius decreases anyway, so why is there not a similarly high stress on the right of the fillet?

Similar effect also occurs when we have a continuous piece of material with a hole in it. The stress is the highest around the hole.

Once again, force lines, what do they represent? Again I can see the similarity to electromagnetism. But what kind of a force field are we talking about here?

One source I found simply explained that we can use methods like finite element analysis to confirm this concentrating of stress does happen. But this is not an explanation either. Use of FEA implies there is some kind of differential equation to be solved, so what kind of theory is there behind it?

What do the lines represent?

In equilibrium the force lines cannot intersect the geometry boundary except where an external force is applied. If they did intersect the boundary somewhere else then there would be a net force on the geometry and it would not be in equilibrium. The force lines must instead flow around the boundaries. The disruption of flow is stronger closer to boundaries perpendicular to the direction of applied stress, so the density of flow lines changes there.

Why does stress concentrate near perpendicular geometry changes?

Consider the bar shown below. It is made from a pure, single-element, single-crystal, closest-packed (i.e. hexagonal) isotropic material one atom thick (i.e. 2D) with a symmetrical crack one atom wide. The bar is under uniaxial tension perpendicular to the crack. We will also assume deformation is negligible so that the force vectors don't change direction, simplifying the analysis.

Atoms far from the crack tip have six neighboring atoms. An example is shown in the upper-left of the image below. Each neighbor applies a force to the central atom. The neighbors above and below apply a tensile force which arises from the global tensile stress. The neighbors left and right each apply a compression force which arises from the Poisson effect. The atoms are color-coded by position. Those on the left are red, those on the right are blue. Their applied forces match colors. The resultant tension on the central atom is shown by black arrows in the lower-left of the image below. 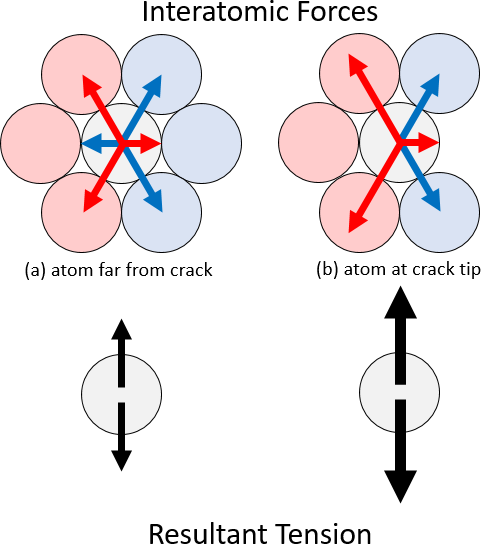 The upper-right part of the image shows the same analysis repeated for the atom at the left crack tip. There are only five neighbor atoms, as shown. Because the atom to the right is missing, there is no compression force to the left. To balance the left-right forces requires the leftward two tensile forces to increase in magnitude. The result is an increase in the resultant tension on the atom parallel to the global stress direction. Thus the atom at the crack tip experiences a concentration of stress.

Both are different in the sense that you can never obtain convergence in the case of stress intensity, whereas in the other case of stress concentration once the mesh is fine enough, the stress value will be higher than the surrounding, but will be converged( meaning value won't increase with mesh refinement).

The reason for stress intensity can be explained very simply on the basis of linear elastic mechanics, given a radial co-ordinate system based on the sharp corner, the analytical displacement solution in the surrounding has the form $u \propto r^{\alpha}$. Thus the corresponding strain/stress will be given as $\epsilon / \sigma \propto r^{-1+\alpha}$ (where $\alpha$ is the order of singularity and is always less than one). Thus you can see, as $r$ approaches zero, the stress becomes infinite.

Greater details can be found in any Fracture mechanics textbook.

Now coming to stress concentrations, they occur due to abrupt changes in geometry. I think the figures you presented are the best explanations for them. The lines of force represented in the picture are basically the internal force that develops due to the application of an external load. Due to a constant external load, a certain internal force develops in response( and is uniform given a case of plate with no hole), now if the geometry is abruptly changing( a hole is drilled in the middle), the responsive internal force, still being the same in magnitude because the external load hasn't changed, has to be concentrated in some regions( in this case around the hole). This will be clearer if you just look at the force lines for the bar without the hole in it.

I would not overthink the lines of force explanation too much; its a concept that really only makes sense in the context of vanishing shear forces, like masonry.

To me, the simplest explanation of why stress concentrations occur is as follows: consider a rod with a step function in its radius, like in your initial picture. Given a fixed axial load, the most optimal distribution for carrying that load is a uniform distribution over the cross section. Every element carries the same load, and no one area will have a reason to fail before any others do. A uniform rod might reach that distribution if the force is led-in sufficiently gently. But can a rod with a sudden change in cross-section do the same thing?

So by that argument alone, we have proven that the stress distribution near the sectional change, can and will not be the optimal uniform profile; that is it will have some local maxima; concentrations if you will.

Now that still leaves open the possibility that at least the thin end would have the good taste to maintain its optimal uniform distribution, gradually spreading to a wider distribution in the thin end, without unnecessarily weakening our construction. And you can engineer a situation like that, with a nicely rounded transition. But if you consider the effect of the 'extra' material that exists, from a sharp geometry relative to a rounded geometry, you realise that relative to the deformation in the rounded case, that extra material would have to experience a deformation to match the deformation of the rod. You can think of the stress concentration as the reaction force required to deform that 'extra' material along with the rest of the rod. And since the extra material is located out there near the sectional change on the perimeter, thats where you will find a stress peak. Even though the thin end of the rod would love to stay in a nice flat stress distribution, if you put some extra material squeezing it into another shape away from a flat stress profile; well, ask and you shall receive.

Those lines in your diagrams are normal to the equal stress contour planes in the section.

let's say in your top left diagram the area to the left is A and to the right is A/2, and the section is under compression load P.

Now assume we cut the section from the notch in two parts, A the wide and A/2 the narrow. Then we stress them under axial load P. part A/2 is stressed twice and coiled under a lot of pressure. Par A is more relaxed; it is under half the stress.

Now we bring them beck together, while still stressed. Part A/2 will try to push the contact boundary surface back into part A. But due elastic behavior of the material, its edges bend into a curve and there is stress concentration around those edges.

Exactly as when you shoot a stubbed cylindrical slug into a steel plate target. There is so much stress concentration on the slug's perimeter that it crumbles and tears off around the edges.

Not the answer you're looking for? Browse other questions tagged structural-analysis stresses or ask your own question.

2
Why are shapes with sharp corners structually weak?
1
How can I visualize shear stress concentration?

1
Most efficient fillet design given an envelope (for stress)
6
Do outer fillets|chamfers also reduce stress as inner ones do?
0
stress/shear analysis of components
0
hoop stress on a thin glass window
0
Pressure design thickness and how relates to hoop stress
5
Why is pure shear a "shear"?
1
How can I visualize shear stress concentration?
0
Why is my FEM analysis producing unusually-large stress results?