When calculating the deformed radius of a pressurized thick-walled cylinder, why is the hoop strain used rather than the radial strain?

I’ve taken an interest in the design of pressure vessels for use in submarine applications. From a cursory survey of what is used in industry, it seems the de facto standard housing is a thick-walled cylinder (rather than a thin-walled cylinder which would be prone to buckling when loaded in hydrostatic compression). While the equations for stress and deformation in a thick-walled cylinder subject to internal and external pressures are well established (Young, Norton), I’ve also read that prestressed compound cylinders can result in a housing with a greater strength to weight ratio (Kharagpur, Sun).

As a result, I’ve been trying to understand the derivation of the thick-walled cylinder equations to better understand how they can be applied and optimized.

With the help of multiple online sources (primarily Kadapa and Katna), I’m confident that I understand the derivation of Lamé’s equations

This is where things get interesting. In both sources mentioned above, and indeed everywhere else I can find it, the equation for the change in radius of a differential shell is calculated from the hoop strain, rather than the radial strain as I would expect.

While I’m satisfied this is correct, I don’t understand why. Why doesn’t the radial deformation result from the radial strain as I expect it should, according to

What I've tried so far

I’ve tried evaluating both equations for $u$ for the simple case of a single cylinder subject to internal and external pressure (the boundary conditions given in every textbook). 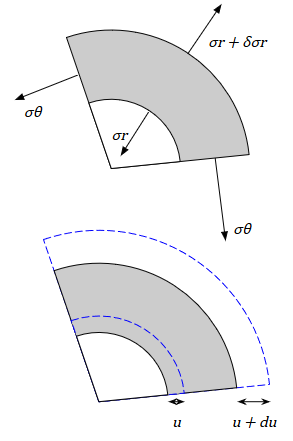 While I can’t find fault with this statement, I think I have shown that it is only true for thin-walled cylinders where the hoop stress is assumed to be constant throughout the wall as below:

Based on the methods presented in Kadapa, Katna, and others,

This first order linear ODE has the solution

I think I've identified my misconception. As alephzero commented on my question, I was conflating the local strain with the overall radial deformation. The strain is defined as the normalized change in length of an infinitesimal line segment, and not as the change in length of a macroscopic dimension such as radius. As such, the results

Thanks for pointing me in the right direction.

Not the answer you're looking for? Browse other questions tagged mechanical-engineering pressure-vessel solid-mechanics or ask your own question.