How do drag and downforce in a rear spoiler of a car vary with angle of attack?

I ran an two aerodynamic simulations, one for a spoiler angle of 0 deg and the other for the same spoiler declined at 30 deg. The results showed a considerable increase in downforce, but only a slight change in drag. Is this the expected behavior of a spoiler?

It isn't clear from the question whether you are using a flat plate spoiler like in NASCAR or an inverted airfoil like in Formula 1. For flat plate spoilers a big part of what they are doing is to inhibit aerodynamic lift from the car's body. Lift always causes induces drag so spoiling the lift reduces the induced drag. This is why they are called spoilers.

To answer your question,

The spoilers cross sections are made by the aerofoils/airfoils. These are called "Streamlined bodies" in which you tend to get more lift than drag. (In the other way, they produce less drag than bluff bodies like sphere/cylinder etc.)

To explain a bit more,

The Drag force is less for streamlined bodies.

Note: Please check your angle, the effieciency is a strong function of angle of attack. At very high angle of attack the flow tends to seperate and can create adverse effects.

This is a typical graph for $C_L$ and $C_D$ with respect to angle of attack. 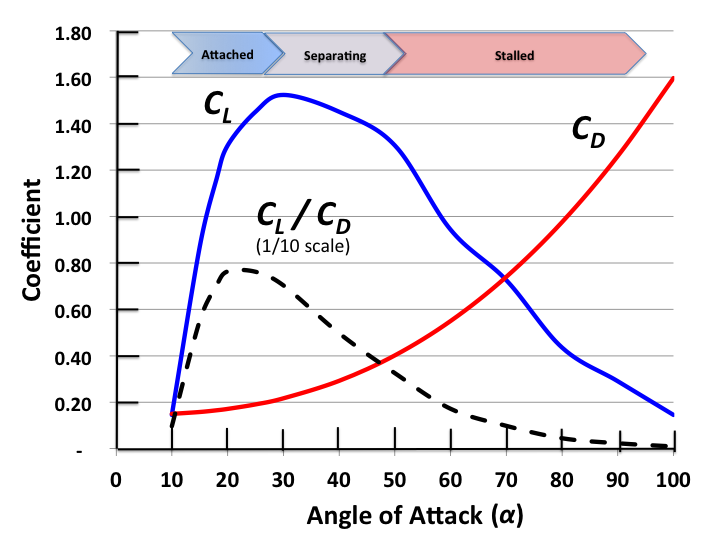 As you can see, up to 30 degrees, $C_D$ increases very slowly, while $C_L$ reaches its maximum and then drops. So this is pretty standard. The ratio between $\frac{C_L}{C_D}$ can go from 10 to 50 depending on the specific airfoil that you use.

So your simulation results seem to be in the right track.

Not the answer you're looking for? Browse other questions tagged mechanical-engineering fluid-mechanics automotive-engineering aerodynamics cfd or ask your own question.

12
Which turbulence models are suitable for CFD analysis on a streamlined vehicle body?
0
Formula (or heuristic) for calculating force required for incremental change in angle of attack of an airfoil
0
Twin cylinder engine opposed cylinders
1
How can I connect F=ma to Drag=1/2*Cd*(rho)*V^2*A?
2
Closed loop guidance and control: how to tune a system with multiple feedback controllers?
1
What affects a car's overall top speed?