Member weight in a planar truss?

So I'm given a question in which a Truck drives over a pratt truss bridge. In the question the truss is in 3D.

I'm given: 1)The loads from each axle of the truck 2)The weight of each member in the truss 3)The weight of the concrete and asphalt

I have a few questions here, (3) being the most important: 1) How can I "show that the observation permits a very simple analysis...." 2) If the cross bracing members can be simply ignored are their weights ignored as well? 3) Considering the truss would be mirrored on either side but I am now only analysing one side (one plane), are the loads from the lorry, and the weights from the concrete and asphalt divided in half?

Now, for your questions.

(1) Show the system can be analyzed as two independent, parallel plane trusses.

Before jumping to 3D space, let's see what we can understand from 2D space. Consider a truss arrangement on an x-y plane. 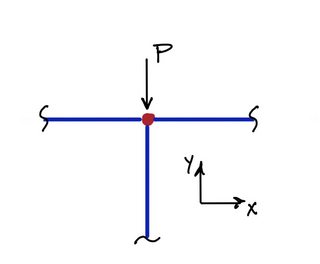 We have a vertical load applied to a system of orthogonal vert/horiz members. With knowledge of the equations of equilibrium and Assumption #2, we can observe that Load P will be carried entirely by the vertical member. The horizontal members will not carry any of Load P because no component of Load P is along the axis of the horizontal members. If we had diagonal members, then we could imagine calculating a component of Load P that acts along the diagonal member.

Hopefully this gets you thinking about how vertical loads would be carried by out-of-plane members.

(2) Are the weights of the cross-bracing ignored?

In structural analysis courses, the self-weight of the truss is often completely ignored, on the premise that the effect of the self-weight is small compared to the applied loads (and likely also because representing self-weight requires a lot of nodal loads, which is inconvenient for introductory analysis). In your more real-world case, it's still likely the lateral bracing self-weight is negligible, but since this is about the learning process, you might consider analyzing it just to convince yourself of that fact. Remember that loads (including self-weight) can only be applied at the joints.

(3) Are loads from the truck and bridge deck divided in half for plane-truss analysis?

Yes, and no. For purposes of a homework assignment, it's likely that they do just want you to split the load in half (though you still have to consider how to turn that into point loads at truss joints.)

This gets into considering the framing system for the deck/stringers/floor beams. A not-to-scale sketch of one possible framing system is below, along with a picture of an actual truss bridge that used a similar framing plan. (Note that it may actually be more common to have stringers frame directly into the floor beam rather than running continuously over the top of the floor beams as I sketched.)

Turning the deck weight into loads at the truss joints can be done by considering the length of deck that is tributary to each floor beam. For example, if the floor beams are spaced at 30 feet, then the load from 30 feet of deck goes to each interior floor beam, and from 15 feet of deck to the first/last floor beam. Then the floor beams will transfer that load equally to the two trusses.

Applying the truck weight to the truss can get a little thornier, particularly considering that trucks can move both longitudinally and transversely along the bridge and you don't state whether the assignment specifies truck position. If the floorbeam spacing is more than twice the distance between the truck's first and last axles, it's reasonable to assume the truck load is all applied to one floorbeam. If the floorbeam spacing is tighter than that, you might consider how much truck load goes to each floorbeam. Assuming it all goes to one floorbeam is conservative though. If the truck can be placed somewhere other than perfectly in-between the two trusses (ie. closer to one truss than the other) you might want to account for one truss receiving more than 50% of the truck load.

Depending on how the homework assignment is written, the professor may just want you to experience the process of making simplifying assumptions. However you choose to represent the truck/deck loads, document and justify your choices.

Not the answer you're looking for? Browse other questions tagged structural-engineering structural-analysis bridges or ask your own question.

6
Truss manufacturer drawings unclear
3
Steel Roof Truss Shape Question
3
stiffness factor for member in beam
0
cut section method in truss
2
How do I calculate the member forces of a truss when external force acts on the member (not joint)?
0
Concept on two-force member
0
2D- Truss Member Analysis
0
Calculating member stress in a truss
0
Is this web member in the double fan truss design problematic?