What is this captive screw and barrel nut adjustment assembly called? Picture attached

I'm designing a precision adjustment bracket, and I'd like to have a component that allows the field tech to make small adjustments to push and pull on each axis of adjustment.

I went looking to see how others have solved this problem and found an assembly that seems common to several precision adjustment assemblies. I'm a bit embarrassed to say that, as a degreed mechanical engineer.... I don't know what these are called. 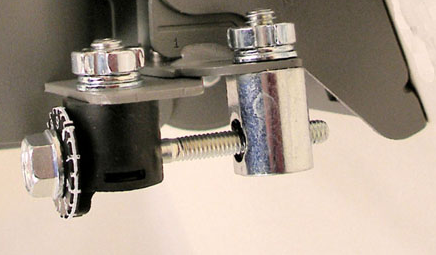 I would say that this is a captive screw that threads into a barrel nut, but that doesn't seem to be it. At least, I can't turn up anything suitable on McMaster's site when I try it. Pro tip - Probably don't Google "captive bolt." Apparently that name is more commonly used to refer to the device used to slaughter animals.

I also can't seem to find barrel nuts that have a threaded end as pictured in the assembly; barrel nut seems to be exclusively the drop-in fastener used for a lot of flat-pack furniture.

Here's another view of the same item from above:

And then what I believe is the same style assembly in a different product: 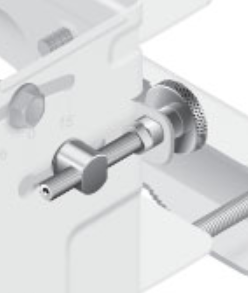 In all the brackets where it's not just "loosen the nut and tap with a wrench until it's generally correct," the assemblies I've shown seem to be the standard solution. I'd like to incorporate it into my solution, but I need to know what it's called to be able to source the parts.

I never quite found exactly what I'm looking for, but I did come close, so I'll post what I've got. If anyone ever does have a better answer, please post it and I'll accept that one as correct.

The parts seem to go by a lot of names, but Phil Sweet's comment led me down the track to get where I am. An IPB, "illustrated parts breakdown," of a reel mower showed a similar assembly where they called one part a pivot pin. I had tried "swivel pin" to no avail, but pivot pin started to turn up some results.

I'm not affiliated with the following site, but they seemed to be the only people I could find that had a McMaster-style site that let me configure the parts by material grade, thread spec, length, etc., so I'll mention them here for that reason: https://us.misumi-ec.com

They sell the components for an assembly that they depict in their catalog as follows:

The assembly is made up of an "adjusting bolt": 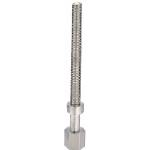 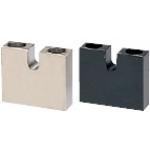 The block wraps around the "neck" of the adjusting bolt, such that the bottom of the hex head cap is on one side of it and the top of the shoulder is on the other side. Once you put the adjusting bolt into the slot in the block it can't move axially.

Then you thread the adjusting bolt into the "Brackets for Adjustment Screws Bolt Type": 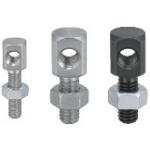 My issue with this setup is that the block can't swivel/pivot, so it wasn't of any use for me. I continued to look for a while and found a relatively common part for tractors called a stabilizer stub pin. This is used in the three-point hitch that attaches towed accessories to the tractor:

These pins have a smooth bore, so the adjusting screw could slide into it, BUT there isn't any way to get it to work with the neck/shoulder on the adjusting bolt. I thought that I might be able to use just a standard bolt if it had a machined groove in it; my idea was that I could drop the bolt into the stabilizer stub pin and then use a circlip/snap ring/retaining ring to act as the shoulder on the Misumi adjusting bolt.

Googling around led me back to Misumi's site, actually, for their "bearing shaft screws": 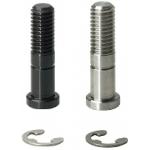 Ultimately I'm backing out and am going to take a different approach entirely to the problem. I need relatively low-cost assemblies, but they need to be ALL stainless steel because of the installation environment. The only way to get the pivot on the bolt is to use the stabilizer stub pin and the bearing shaft screws, but the stub pin is not stainless and the bearing shaft screw is prohibitively expensive because it's machined to actually provide a bearing surface.

For the record, too, you can find these assemblies pretty easily if you look for "chainsaw tensioners," but again I need the stainless steel material so they were out of the question for me. 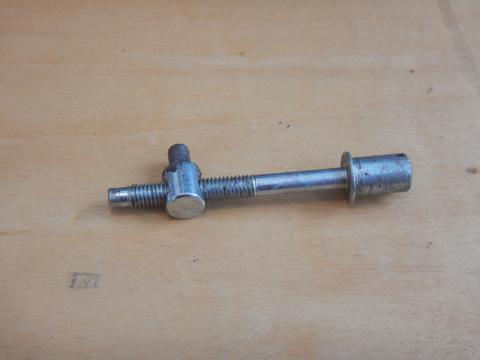 those are used to hold together do-it-yourself furniture, like from IKEA. hardware stores sell replacement assemblies. Take your photo to a well-equipped hardware store and ask the help what they are called.

Not the answer you're looking for? Browse other questions tagged mechanisms terminology or ask your own question.