Can a simple application of two forces have two different outcomes on a rigid body?

[Summary: If two forces are such that the component of one of these forces forms a couple with the other, than which of the two cases (obtaining resultant via adding forces or obtaining moment and a resultant force via the method shown below) are correct? Read further for clear and detailed explanation]

Let two forces, F1 and F2, act on a rigid body and have a common point of application at Point A. Then their resultant force, R, can be calculated by the normal use of parallelogram as shown in the image below: 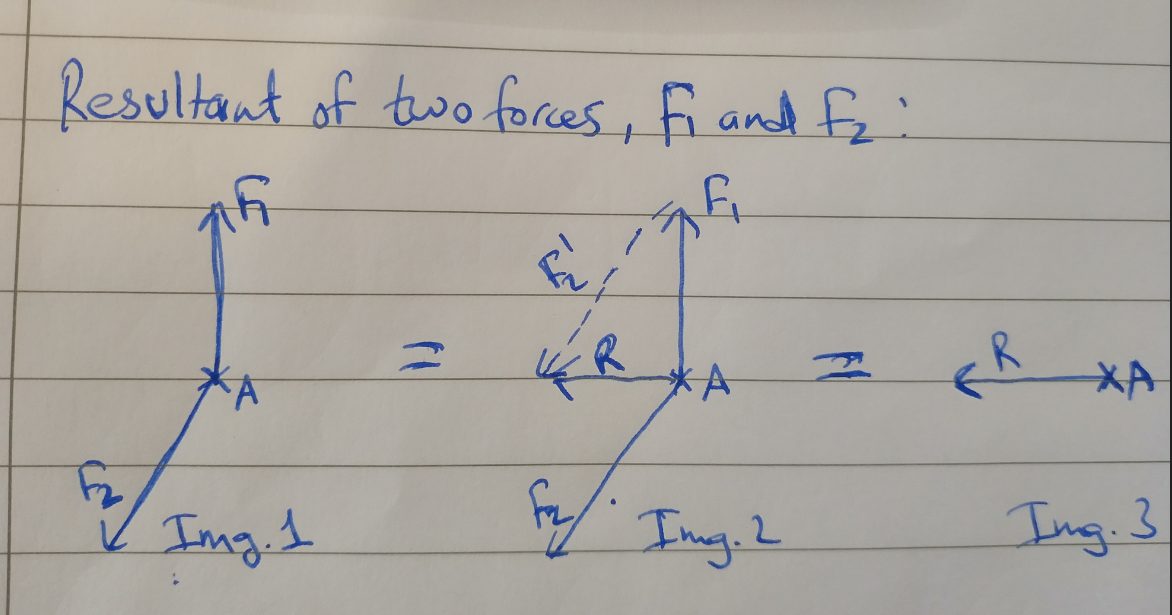 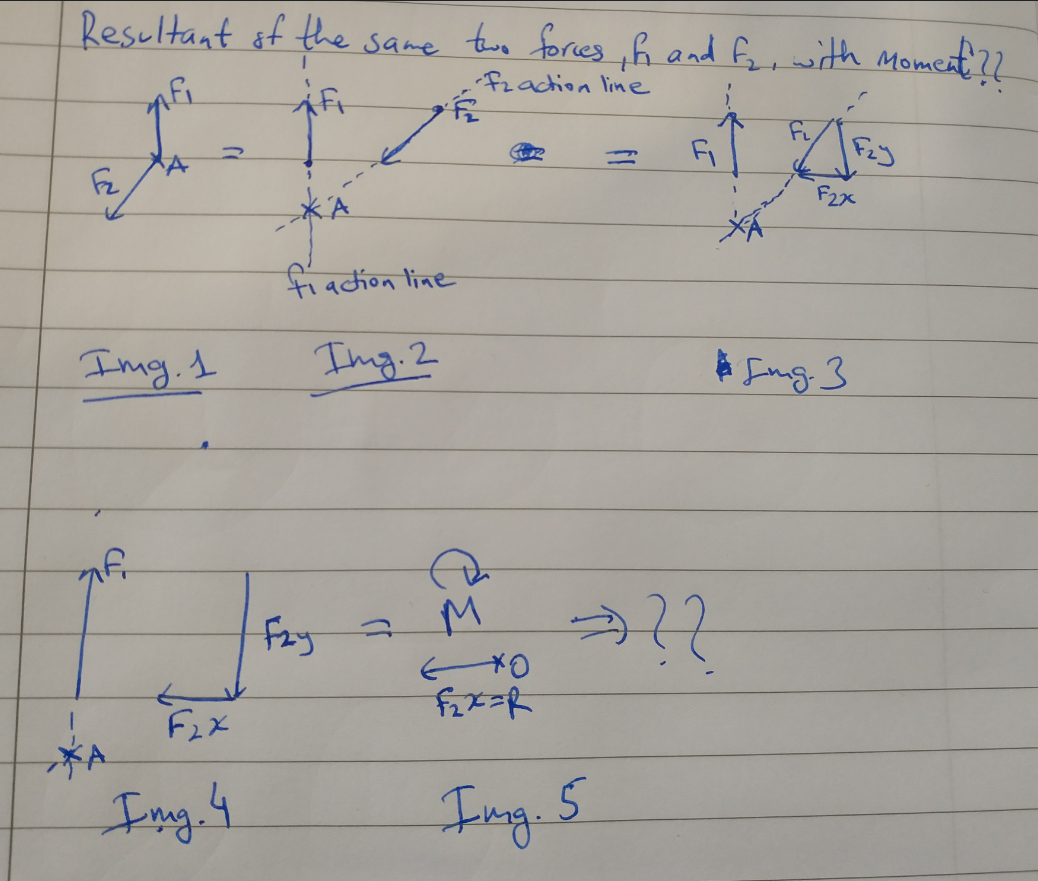 So, does this mean that, given the following conditions:

1) If any two forces Fa and Fb have intersecting action lines,

2) A line perpendicular to the action line of Fa at the point of intersection divides the plane (or rigid body) in two parts,

3) And Fb points towards a different plane (or different part of the rigid body) than Fa,

Then we have a resultant force (found by the parallelogram law) and moment at the same time?

But then what is the point of application, O, of the resultant force found in the second Image (Img. 5)?

But if this is so, then shouldn't the parallelogram be only defined in a way where the two forces are directed towards the same plane?

Or is this entire thing true? Can the forces actually be moved and resolved in a way they are here? Why or why not?

[Sorry if the post is messy and incomprehensible. I tried, as much as I can, to explain the question in the most organized fashion...]

There is only one possible resultant for two forces acting through a single point, and it is not possible for those forces to produce a moment about said point.

It is valid to move a force along it’s line of action.

It is valid to break a force into x and y components.

In the situation you describe, if you moved the force along its line of action and then broke it into x and y components, you would still solve the three equilibrium equations. Sum of forces in the y direction. Sum of forces in the x direction. And sum of the moments about a point. The moments about the point produced by the x and y components would cancel. (In your writeup, you seemed to be ignoring the moment produced by the y component, which would be incorrect) 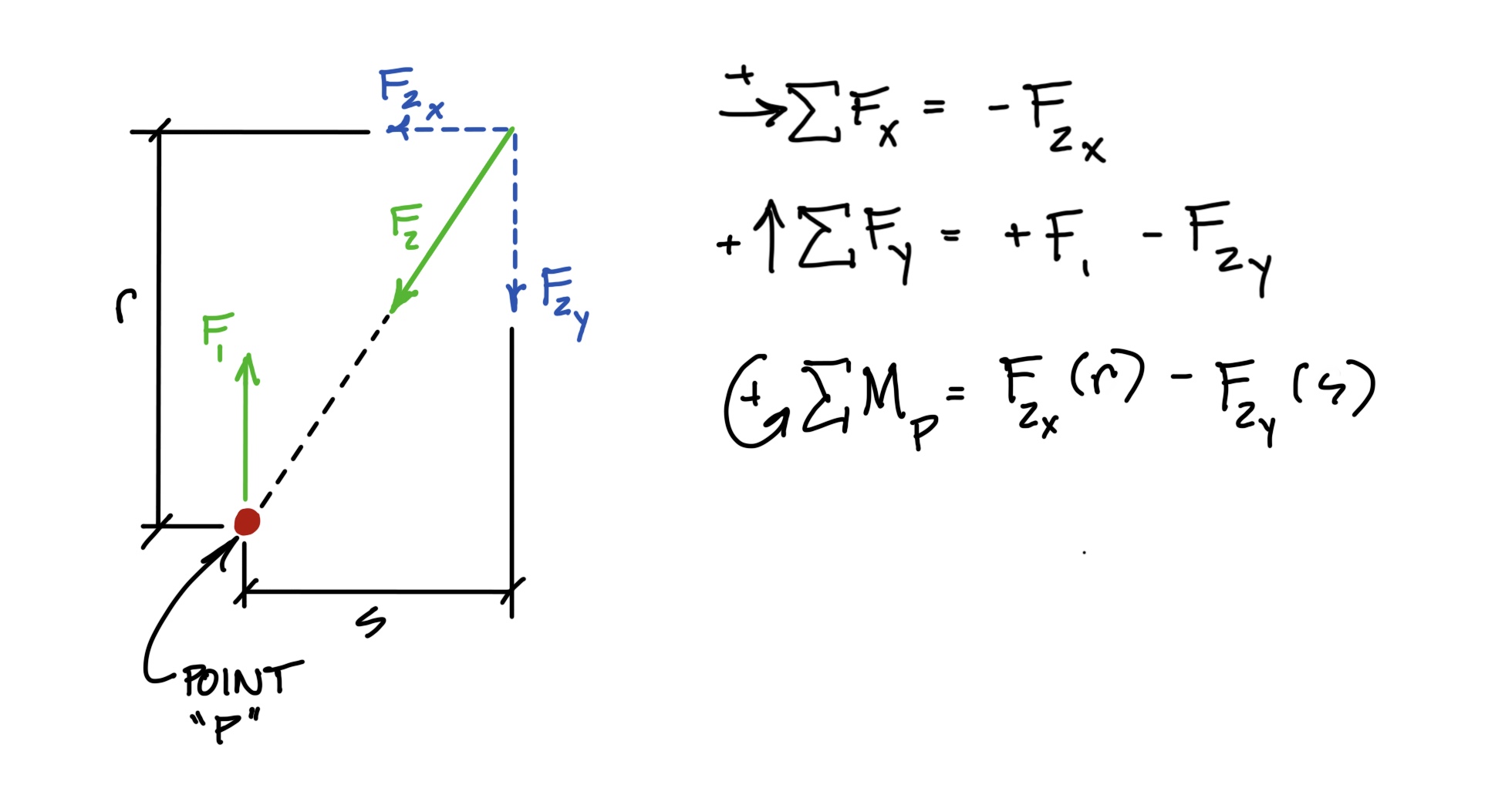 Any two force regardless of their graphic representation if they have a point mass destination have no torque unless the mass is at a fixed distance from a center fixed as a rotation arm. Or if they act on two separate points on a real object.

You have not yet added the components in your second sketch, if you do the F2y will be cancelled by F1.

Not the answer you're looking for? Browse other questions tagged mechanical-engineering materials statics mathematics or ask your own question.

3
Does thickness impact resolving loads for an inclined beam?
2
Moment and Torque at a Single Point
2
Mathematical connection between systems of particles and rigid bodies
5
How to draw a shear force diagram when two forces are acting at the same point
1
Calculating force exerted on plate by link
1
In static equilibrium body, how can an applied moment about an axis contribute to reaction moment to another point away from the axis?
8
Moment equation from dynamics differs with equations from physics & statics. Where did I go wrong?
0
Calculate forces/ torques on a parallel spring array
0
In the general case of the plane motion of a rigid body, the resultant does not pass through the G of the body. Why is that?
0
Can a body be effected by a force which is not based on a point of the body? ( Principle of transmissibility of force)