Can a rolling wheel create a side force without first rotating on a vertical axis at its contact patch? [closed]

There is something wrong with the way we describe how a cornering vehicle wheel creates a cornering force. I think a rolling wheel must first rotate on a vertical axis to then create the cornering force. This is fundamentally different than what we think about cornering wheels. Can anyone else see this?

In Figs 1a -1b a rolling cylinder is shown to only roll along a straight path. To make it change direction it must rotate on a vertical axis Fig 1c. When you take a wheel off of a car and roll it along the ground (without leaning) it only rolls in one direction along a straight path Fig 2a. To make it change direction you must rotate it on a vertical axis Fig 2b. When you do this while it rolls, a force at its contact point makes it lean and possibly fall over Fig 2c. The cornering force changed the wheel velocity and it rolls in a new direction Fig 2d.

The wheel’s travel is thought to be angular even though a wheel can only roll in a straight path as shown in Figs 1 and 2. This angular travel thought ignores the physics and geometry of the rolling single wheel. The cornering force is thought to be a centripetal force as defined with rotating bodies, but is actually a result of the change in direction of the straight path travel of a wheel. 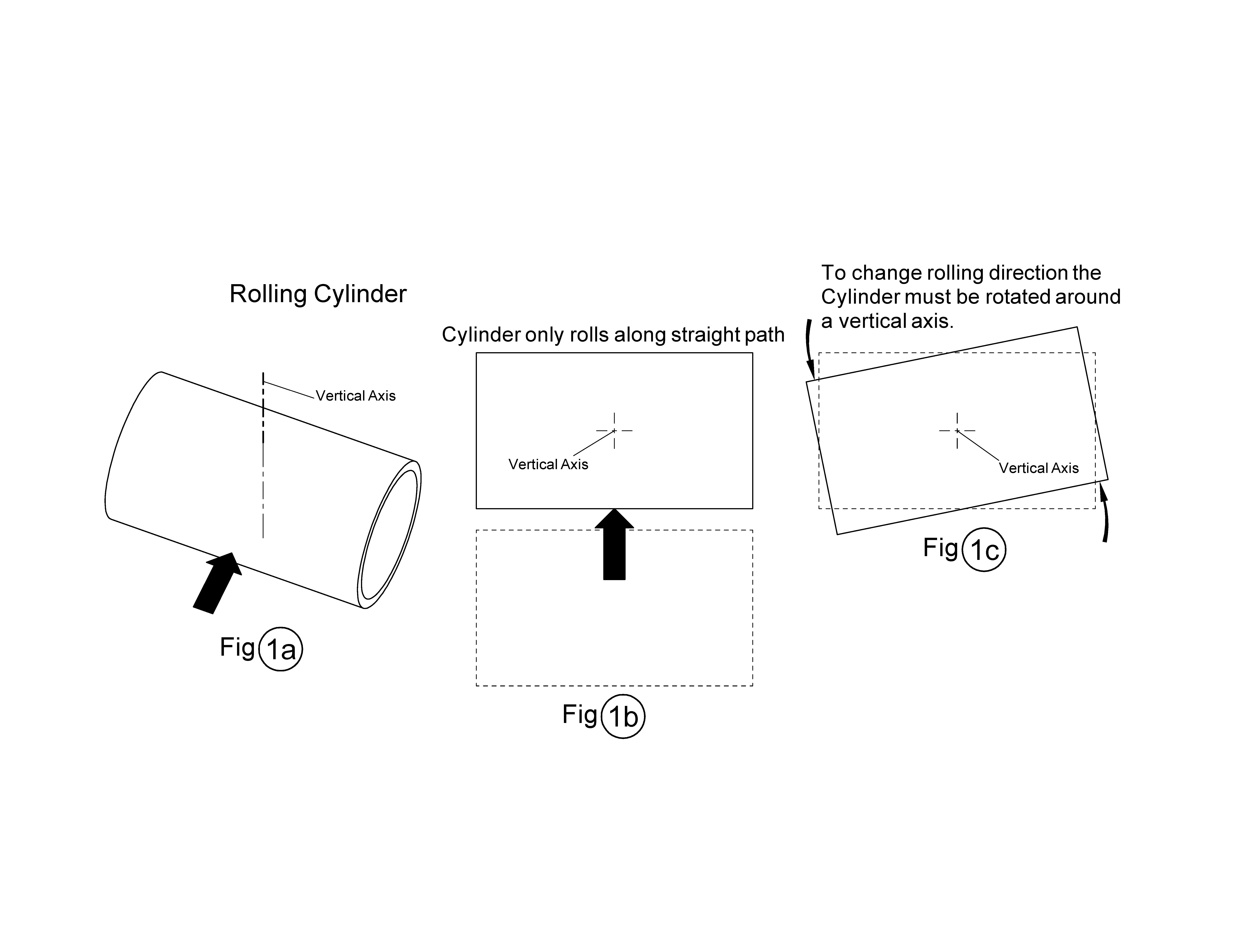 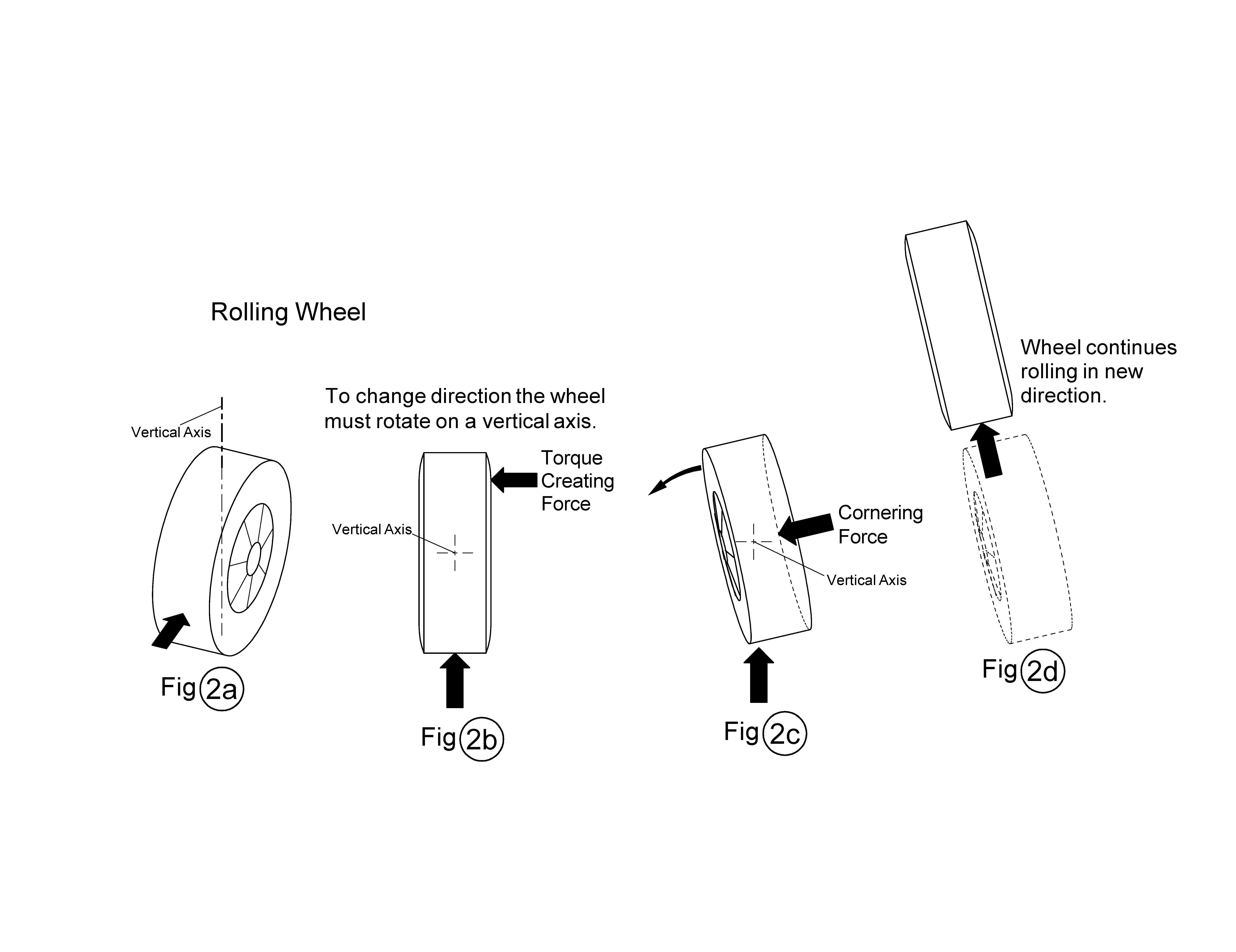 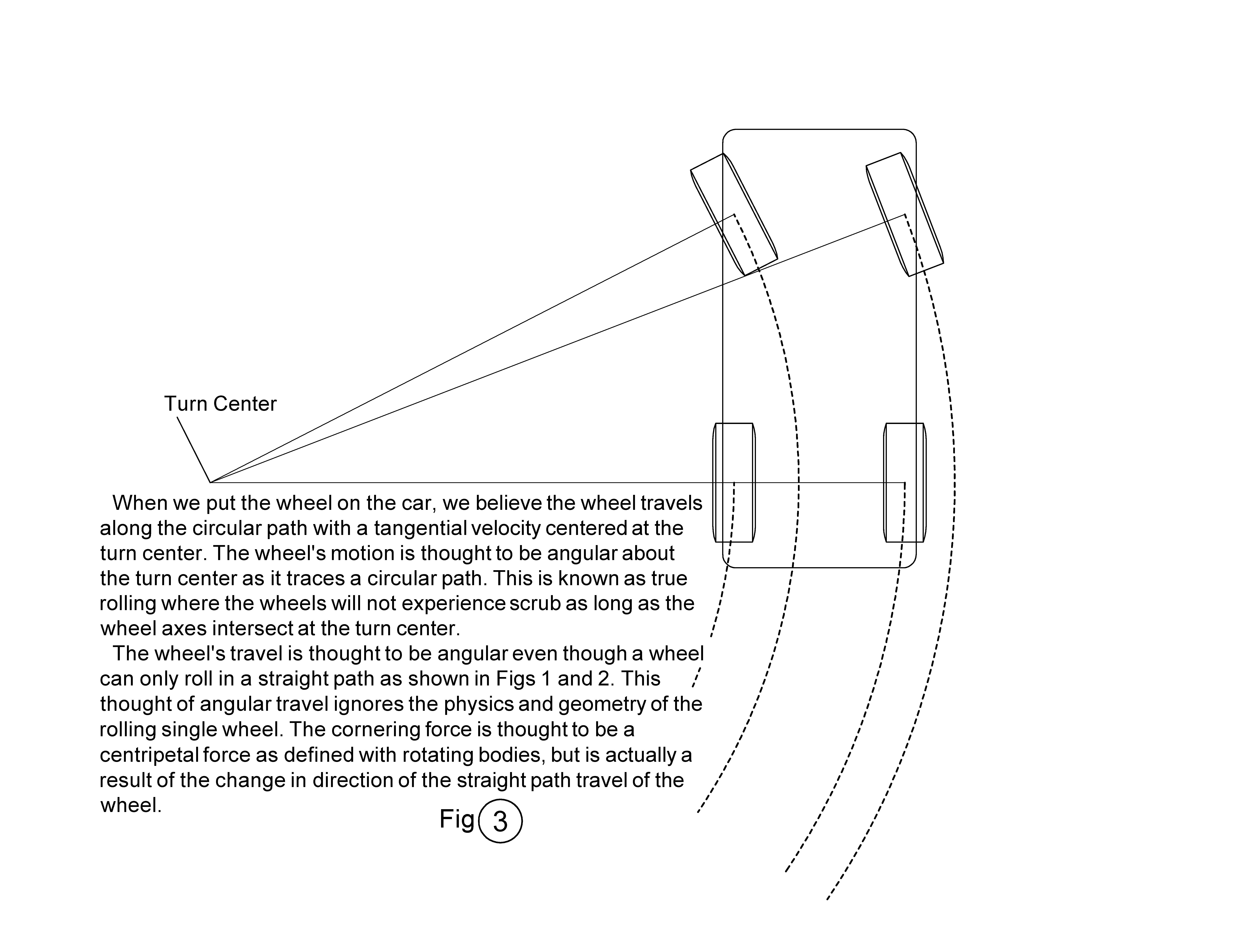 Balanced and Unbalanced Forces at the Cornering Wheel Contact Patch

A car that travels straight while a wind blows at the side of the car will travel along a straight path because the forces from the wind and contact patch friction are balanced. The net lateral force at each contact patch is zero. This is proven because the wheels are not sliding laterally on the road. While the car corners, the horizontal forces at the contact patches are also balanced when the wheels are not sliding. But we know that unbalanced forces exist because the cornering car experiences lateral acceleration.

To accelerate a car in the forward direction, the engine creates the force that results in a torque at the wheel(s) and horizontal force applied at the contact patch of the wheel(s). Applying the brake creates the same horizontal force, but in the opposite direction. The unbalanced forces that result in the acceleration of the car are clearly identified in both examples above while a simultaneous balance of forces exists at the connection of the tires on the road. The accelerating lateral force at a cornering wheel, on the other hand, occurs in a direction that only balanced forces exist.

Because the road doesn’t move, the cornering wheel must create unbalanced forces while simultaneously creating balanced forces at the contact patch through static frictional contact with the road. The force at a cornering wheel accelerates the car laterally, changing the car’s travel direction while the wheels are in contact with the road and are not sliding. Because of the constraints of the wheel and its axle, the wheel rolls in one direction perpendicular to the wheel axle - wheel axis of rolling rotation. In the speed changing examples above, acceleration and deceleration forces are parallel to that wheel rolling direction. Yet while cornering, the wheel creates a force in a direction it doesn’t roll.

At any instant that the cornering wheel is in static frictional contact with the road and rolling, the wheel rolling direction and mass velocity are in alignment. Why? As explained above, when a force like a wind is applied to the side of the car the lateral forces are balanced when the tires are not sliding laterally. With the cornering wheel this seems contradictory since we know unbalanced lateral forces exist, yet the lateral forces are also balanced. Now we are left trying to explain the creation of this force by a wheel that cannot create a lateral cornering force by rolling and that’s simply because it doesn’t roll in that direction.

Centripetal Acceleration and Newton’s third law at the cornering wheel

Centripetal acceleration is the result of a force on a body in motion that is always perpendicular to its velocity creating circular motion. Because we think the turning car is in rotational motion about the turn center, it experiences an applied centripetal force from the road to the wheels. Newton’s third law would then say that the wheel applies a reactive force equal in magnitude on the road. The problem here is that the non-moving road cannot apply a force on a wheel to change its velocity.

If the wheel was attached by a rope to the turn center, the rope would apply the lateral force to the wheel that changes the wheel’s velocity direction. The car sitting on a large spinning turntable would experience the applied centripetal force from the turntable at each wheel. Both examples have an applied horizontal force that then results in the reactive force on the rope and turntable. Since the road does not move while the car corners, it must be the wheel that applies the force on the road. The road then exerts the reactive force preventing the wheel from sliding. Now keep in mind that centripetal force is not a reactive force. It is the force that creates the circular motion and not the reaction to rotational motion of a body.

When and how does the wheel exert the perpendicular-to-its-rolling-direction force on the road? When the mass velocity is in a different direction than the wheel rolling direction as stated above. The only way that can happen is when the wheel rotates on a vertical axis located in its contact patch, not unlike turning your steering wheel. Why? Because the road does not move and the wheel only rolls in one direction. Also, the car is not rotating around the turn center as explained above.

If you disagree with this just keep in mind that nowhere in today’s vehicle dynamics do they say that the cornering wheel applies the force and the cornering force is then the reactive force. It’s easily proven, but would not work with how we currently describe cornering vehicles. 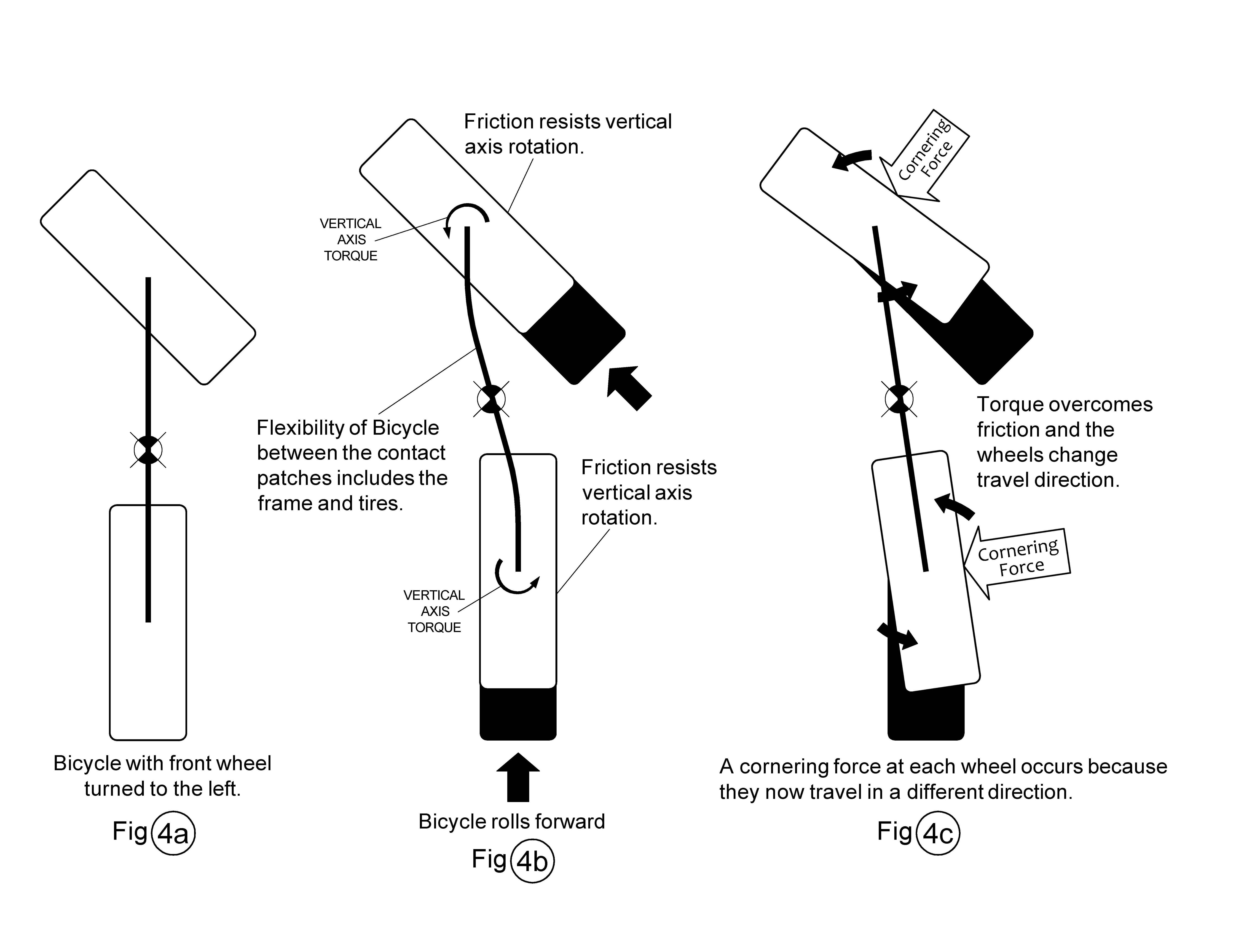 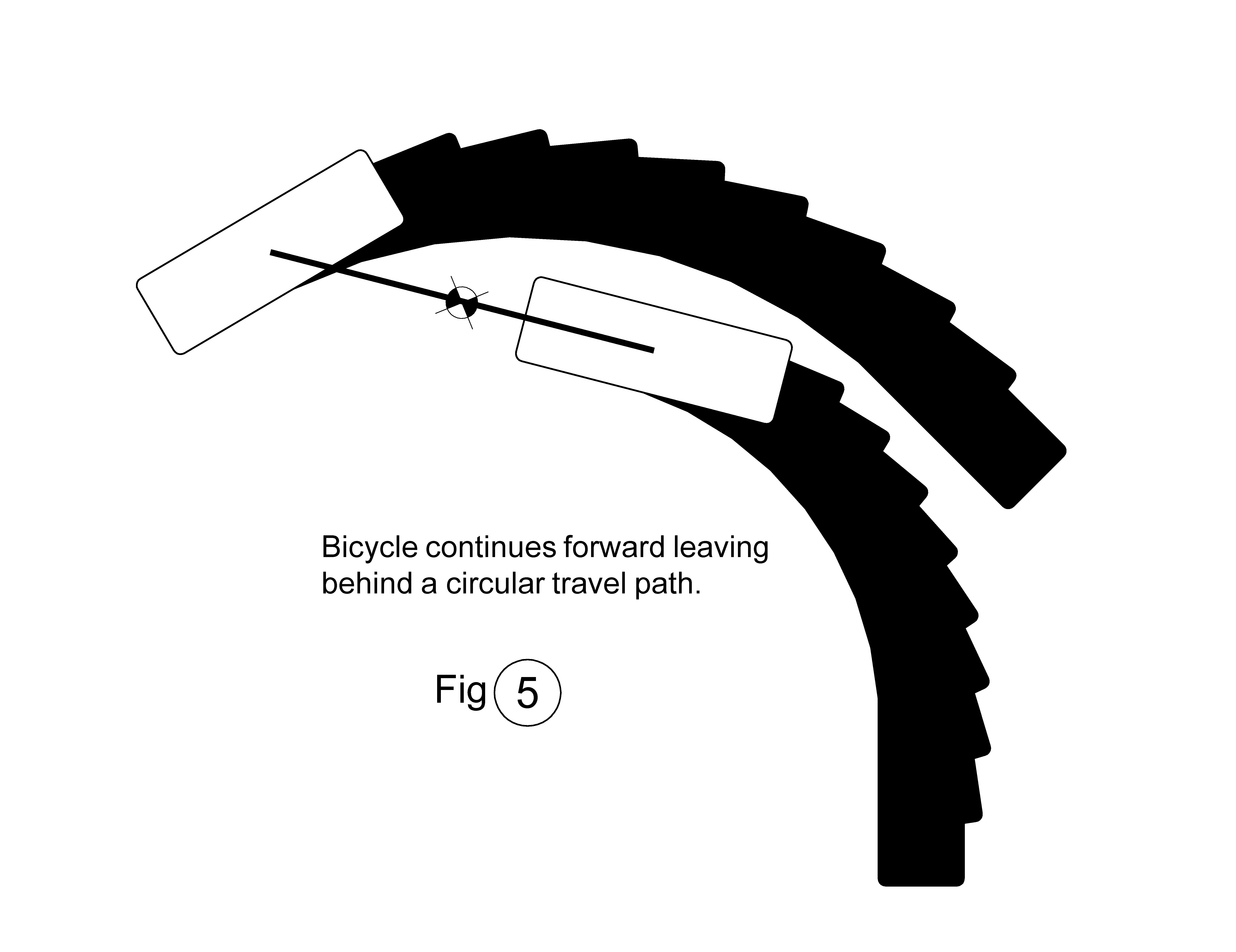 The front wheel points in a different direction than the rear wheel and both wheels are biased to travel different directions Fig 4a. Because of the flexibility of the bicycle between both wheel contact points there will be some straight path travel of each wheel Fig 4b. ANY distance forward that a wheel rolls and there will be a vertical axis torque created. This is because of the contact patch friction and flexibility in every part of the bicycle through the frame and rubber in the pneumatic tires.

As the bicycle rolls forward, at some point the torque overcomes the friction at the contact patch and the wheel changes travel direction Fig 4c. At that instant the cornering force occurs because the wheel travel direction is then different than the mass velocity direction. This is explained above.

This cornering mechanism can also be found in cornering boats or airplanes. The hull of a boat is biased to travel a different direction than the rudder. The boat and rudder resist vertical axis rotation and this results in a direction changing torque created at both the rudder and boat. This is a universal rule for any self-guiding vehicle with two or more contact points in or on any medium.

Your understanding is missing substantial information regarding statics and equilibrium. Think for a minute:

The instantaneous forces acting in the wheel system are radial velocity, momentum, inertia, kinetic energy and friction. Above all there is also gravity. When the wheel changes direction, its centroid remains constant but its centre of gravity changes. It is possible for a body in motion to have its centre of gravity outside itself. This occurs because of a constant resistance force applied to the control arm which exceeds the losing radial velocity gyroscopic forces. In addition there is the moment of inertia imbalance that is corrected by asked force through the control arm. The axle or more correctly, constant velocity joint (cvj), transmits force to the issuing wheel which also provides resistance to direction change observing by steering control arm. This is why wheel bearings are often the conical thrust type or specially designed ball race type instead of rod type bearings.

The lateral forces are the result of radial inertia change with an equal and opposite force in the directing of steering. Newton's third law of motion...

Not the answer you're looking for? Browse other questions tagged mechanical-engineering dynamics wheels car rolling or ask your own question.

1
How does friction help a car to turn?
1
How does a single pivot side-pull caliper bicycle brake work?
4
What causes Rolling Resistance?
2
Cruise Control Project on Toy Car
0
In equilibrium is engine torque zero? Vehicle dynamics
1
Effect of friction (or horizontal motion) on vertical surface deformation
0
If aboard a train being driven along a track by centripetal force, would it feel like you were on a regular straight track?
2
Would a car slip down on a frictionless banked road and situation for friction road
2
Free body diagram of a differential-drive mobile robot