If you draw a diagram with a spring, is there any convention about how it should behave with lateral loads? I guess it might be either: 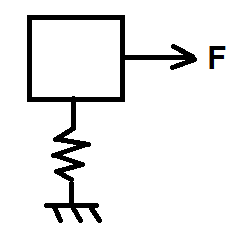 Here's an example where it looks like we're supposed to neglect any bending or shearing of the springs. For instance, if the object moves in the y direction, only the 3 bottom springs would deflect and we wouldn't consider the bending stiffness of the other 3 springs. Is that right and common? 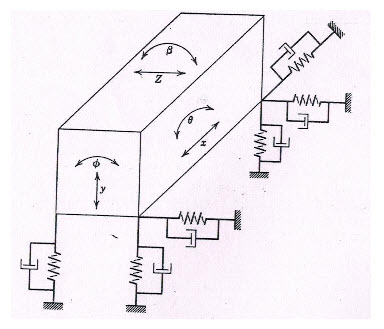 The convention for an idealized spring in such a schematic is that the lateral stiffness is zero but also that it does not move out of its original orientation with respect to its base (i.e., it does not tilt). The idealized spring is characterized by only one parameter: the axial stiffness. (It is thus assumed that the axial deflections are sufficiently small that the stiffness is constant and displacement independent. This assumption holds for small perturbations of any stable solid.)

Since the lateral stiffness is zero, other constraints must limit a body's motion in the directions orthogonal to the spring axis. This can be seen in your second schematic, in which each degree of freedom is constrained by the axial stiffness of one or more springs. In contrast, your first diagram is not well defined: the block should accelerate to the right for any positive $F$, which then results in a discrepancy because a real spring would naturally resist such acceleration. To indicate this resistance, you'd either add a pseudospring with horizontal orientation or move away from lumped components altogether, perhaps modeling the spring using the method of compliant joints or by finite element analysis.

A good source of sample schematics for springs and rigid bodies is vibration textbooks, e.g., Tongue's Principles of Vibrations. Thorough and rigorous textbooks will emphasize that the block in your first diagram must be constrained (e.g., by walls) from moving left or right or in or out of the screen/page.

Initially it will be constrained by torsional resistance of the cross section of the spring and will behave like a column laterally loaded, or a cantilever beam with a concentrated load.

But at large deflections the compound reaction of torque and linear expansion of the spring will interact to the applied force.

Here is a sketch of different degrees of freedom of a joint as you asked. 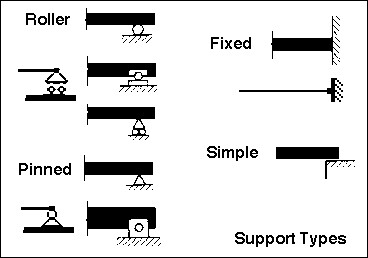 There are some other degrees of freedom such as guided, semi fixed with spring constrains. Or a joint free to move laterally but not rotationally.

Not the answer you're looking for? Browse other questions tagged springs diagram or ask your own question.

3
How much force does a lock's pin have due to the spring?
0
How would I calculate a force on a spring? Or more specifically the weight of an object that spring is supporting
2
Spring-like device with anisotropic k value
1
Calculating pretension of a spring with an initial tension
2
Spring Industry Naming Convention
0
Spring Loaded Pin with Chamfered Pin Finish?
1
Is the Spring Rate for a Belleville Spring Linear?
0
Calculate forces/ torques on a parallel spring array
0
Choosing a Constant Force Spring