I have this aggregate gradation curve in hand, how can I say whether its gap, well or uniformly graded? 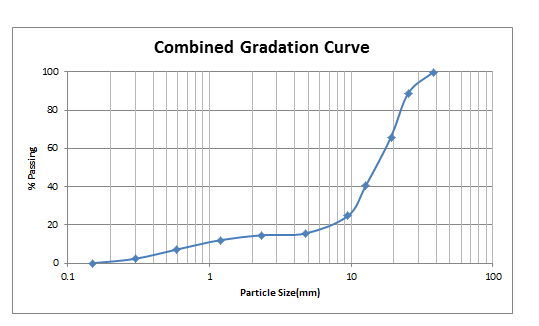 The flat "table" area in the middle of the curve indicates that particles of roughly 1–4 mm diameter are not well-represented in your aggregate. This gap in your particle size distribution is why it's called gap-graded.

A well-graded aggregate has a smoother gradation curve, indicating that there are some particles in the mix of every different size. For instance, take a look at these figures from the Pavement Design Guide of the Texas Dept. of Transportation:

The figure on the right is a 0.45 power curve; the scale of the x-axis is the 0.45th power of the sieve opening, where your gradation curve uses a logarithmic scale of the actual particle diameter. It's a bit different way to see the data but the basic shape you're looking for is the same—a smooth curve that levels off at the tails but not in the middle.

There are also specific criteria for determining whether your mix is well-graded; see Wikipedia on soil gradation for an overview. Judging by your graph, $C_u \approx 19$ and $C_c \approx 8$, which also indicates your aggregate is not well-graded.

Uniformly-graded is pretty easy to identify on a size distribution graph because it's primarily composed of one size of particle; what you see on the graph is a flat tail on the left followed by a sudden jump to near 100% at or around the particle size that dominates the mix.

Take a look at Figure 2 in this article from Pavement Interactive for a visual comparison of the general shape of the curve for different classifications of aggregate. (Note that these are again 0.45 power curves.)

Not the answer you're looking for? Browse other questions tagged civil-engineering materials geotechnical-engineering concrete or ask your own question.

13
What is a Spiral Curve, and How is it Different from a Normal Curve?
1
What are the risks and possible mitigations of installing ground anchors under spread footings?
11
What is the difference between "Crushed Stone" and "Crushed Gravel" aggregate?
4
How does a graph with tensile stress-strain curve and compressive stress-strain curve superimposed look like involving true stress and true strain?
4
Does a spillway failure have different consequences versus dam failure?
1
Liquid Limit of Soil through Atterberg Tests
0
Are there any ways to know whether the element has failed under loading, while knowing only limited properties?