Could a spinning permanent magnet's interaction with the Earth's magnetic field propel a boat through the water?

I am wondering if a spinning permanent magnet's interaction with the Earth's magnetic field will produce a propelling force strong enough to propel a toy boat through the water. This propelling force would be most effective when the toy boat travels due North and stays on that course.

Please reference the drawing below. A permanent magnet would be fastened to a non-metallic bar that is perpendicular to an electric motor's shaft and on the other end of this bar would be a non-metallic counterweight. Say that the toy boat is 1 foot long, the magnet is a .5 inch cube N52 Neodymium magnet, the motor is spinning at 3000 rpm, and boat is in an indoor swimming pool.

Could this magnetic paddle wheel effect propel this boat through the water?

Also, I am wondering if the rotational speed of the motor has a direct effect on the amount of propelling force that is generated. For example, will the motor have a harder time pushing the magnet through the Earth's magnetic field when it is spinning at 3000 rpm as compared to spinning at only 500 rpm?

I had to insert a revised drawing because the original drawing had the magnet positioned in the wrong orientation. Also added text to help convey concept. 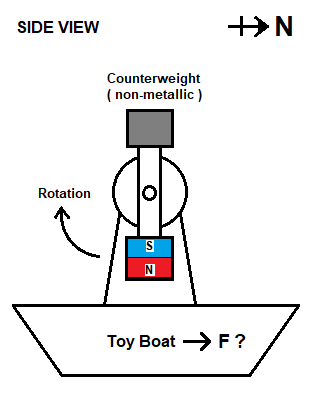 Like anyone who has used a compass knows, earth's magnetic field does exert a force on magnetic objects. In theory this force could be harnessed to do work, but in practice it is too small to be a concern.

For example, a 1 meter long wire carrying 1 amp of current sitting perpendicular to earth's magnetic field will be subject to about 0.0001 Newtons of force. That's not going to be enough to overcome friction let alone build up any noticeable amount of speed. For comparison, dropping a paper clip off the side of a table exerts 100 times that force.

As to your "paddle wheel": The magnet is always in earth's field and is the equivalent of a paddle wheel that is fully submerged in the water. That means the force exerted on your spinning magnet will follow a typical sinusoid pattern, resulting in net zero work. You would be better off just leaving the magnet stationary, but don't expect your boat to move a noticeable distance unless you see all the iron objects in the world flying towards the poles.

4
What relationship is there between mass of water vapour produced in combustion and the energy lost through producing this water?
2
What engineering research field is concerned with the mechanics of adhesion; more specifically, how objects behave in soil media such as sand?
3
Finding the velocity of water flowing through a gravel filled pipe
3
Should one use multiple elements through the thickness with multiple materials?
0
air-dropping actuator for a small drone
0
How to use the moment-of-momentum equation for water flowing through a pipe?
5
Will this water jet propulsion system design produce any forward thrust?