what actually cause quench cracking ? non-uniform cooling or rapid cooling?

It’s well known that quenching most alloyed steels starting from AISI 4140 to high speed steels in water, brine , or sometimes oil will cause cracking and distortions.

in industry oil quenching sometimes replaced by molten salt, which considered better than oil in decreasing crack probability and this advantage attributed to uniform cooling provided by salt bath compared to other quenching mediums.

cracks and distortions caused by water or brine quenching usually attributed to rapid cooling , but sometimes they attributed to non-uniform cooling caused by vapor blanket. that’s so confusing!!

it is expected to obtain uniform cooling by quenching steel in high concentration salt solution "nearly saturated solution" thanks to large amounts of ion particles which disturb vapor blanket, but these type of solutions will also have high cooling rate compared to oil. such rapid cooling usually attributed to be the of quench cracks in water quenching ! 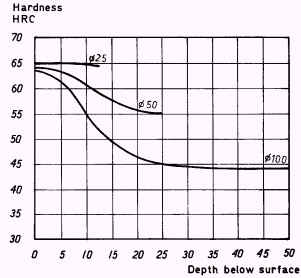 To answer your specific question ; maybe. O-1 tool steel has good hardenability ; the standard Jominy test showing HRC 60 two inches from the end ( austenitized at 1525 F). From experience with O-1 , cracking occurred in small parts ( less than 1/2" thick) when oil quenched from 1475 F , but when quenched into oil from 1600 F no cracking occurred. This was because the higher temperature produced retained austinite ; being relatively soft and ductile it prevented cracking. The same affect would occur with water quenching ( retained austenite). One would need to experiment with the best austenitizing temperature for each part configuration using a water quench. Double tempering will be needed as the retained austenite will mostly transform during the first temper. Heat-treated steels tend to crack and distort because of the stresses caused by the contraction and expansion: As the steel cools ( contraction) and transforms to martensite ( expansion), then continues cooling (contraction).

Not the answer you're looking for? Browse other questions tagged structural-engineering materials steel manufacturing-engineering metallurgy or ask your own question.

10
What made bronze the first widely used (non-ornamental) metal in human civilization?
2
Does oil actually “attract” dirt?
0
How to create a non uniform pressure load in MSC Patran
3
Percentage area of steel for a retaining wall - standard formula doesn't make sense to me?
2
What is the difference between work hardening and strain hardening?
8
Can high alloy tool steels be quenched in brine?
1
What is the strongest and lightest material?
0
Thermal Non-Insulators?