Is this Proportional Electro-pneumatic valve a direct replacement for other valves listed?

In the midst of trying to redesign the pneumatic subsystem of a combined system, I'm at the point of validating a new valve would serve as a direct replacement. The reason for the redesign is an inconsistency of operation over many cycles. The delay between the shifting of the solenoid and the pressurization of the Retract side of the Cylinder is inconsistent, causing errors throughout the rest of the system. The goal with the redesign is to return the system to a closer approximation of the original configuration (shorting piping), while using modern valve technology to retain remote control.

Current Pneumatic Circuit:
The system pressure is 90-110 psi, then Filter, Regulated to 60-80 psi, and Lubricated. 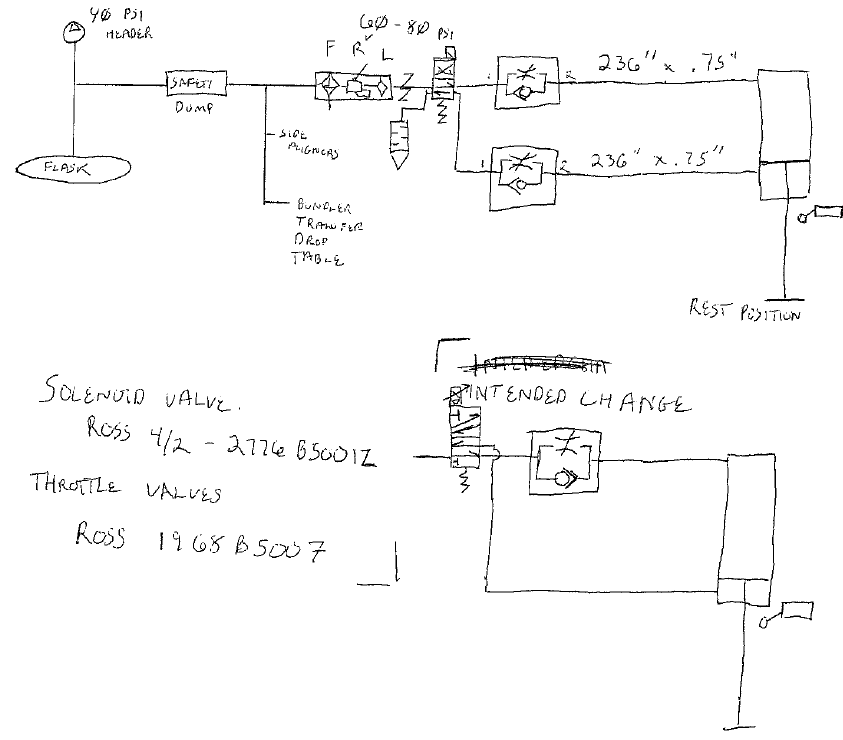 An interest in operator safety moved flow control valves outside of machine guarding at a midpoint in the life of the machine, though there isn't documentation available demonstrating that artificial volume increase in the cylinder. This added roughly 236 inches of 3/4 piping to the system.

For pneumatic reasons, the flow controls have been installed to allow free flow to the cylinder from the source, but metered flow from the cylinder to the exhaust.

The Flow coefficient of the flow control valve is 8.3.
The Proportional Electro-pneumatic valve supports pressure control of the (A) port, aligned to the retract side of the pneumatic cylinder. The maximum effective area of the valve is 52 mm^2, with a flow coefficient of 2.9

Issues investigated beyond the valves: Lubrication is regularly checked throughout operation. The cylinder is new and properly configured Header pressure doesn't vary regulated pressure doesn't vary. The solenoid is in good working order. There isn't an issue with the electronic control circuitry.

Browse other questions tagged valves piping pneumatic or ask your own question.

2
Fluid dynamics: valve and pressure drop
1
What type of pneumatic valves would represent the valves in the schematic?
1
What is the “quick bleeder valve” in this tool changer pneumatic schematic (and other questions)?
1
Designing a pneumatic system for consistent pressure/flow
1
Is there a type of check valve that allows gas to flow in both direction but stops liquid from flowing back?
4
Divide Flow and Maintain Pressure