Is this refrigeration cycle thermodynamically possible?

This is a screenshot of a lab where we were experimenting Vapor-Compression Refrig. Systems.

I am trying to understand what is happening between points 1-2 because I thought that because of max isothermal efficiency the gradient of the line shouldn't be more than the constant entropy line between the two points.

Also I am not sure how to explain the dip between points 5-1. 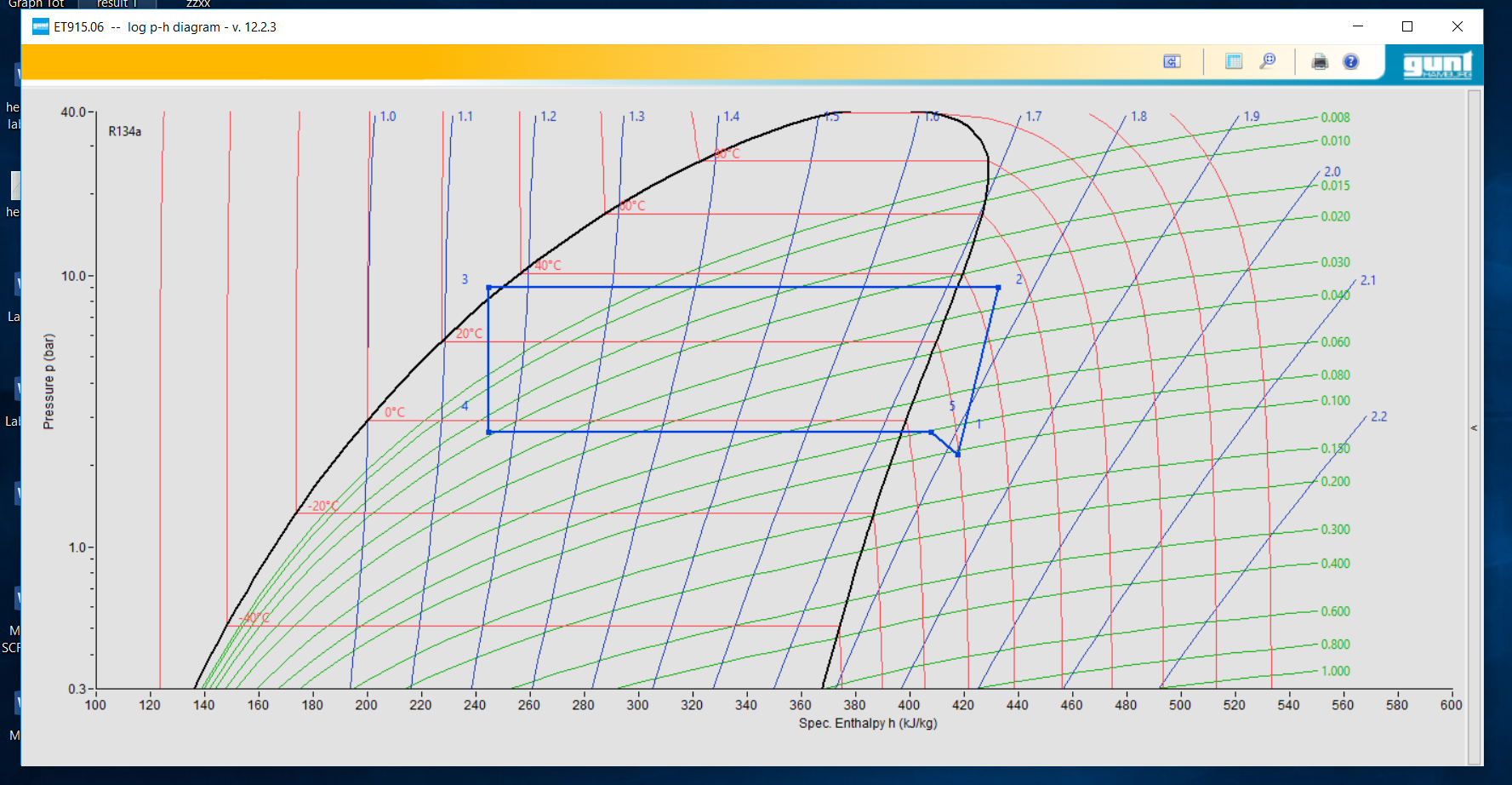 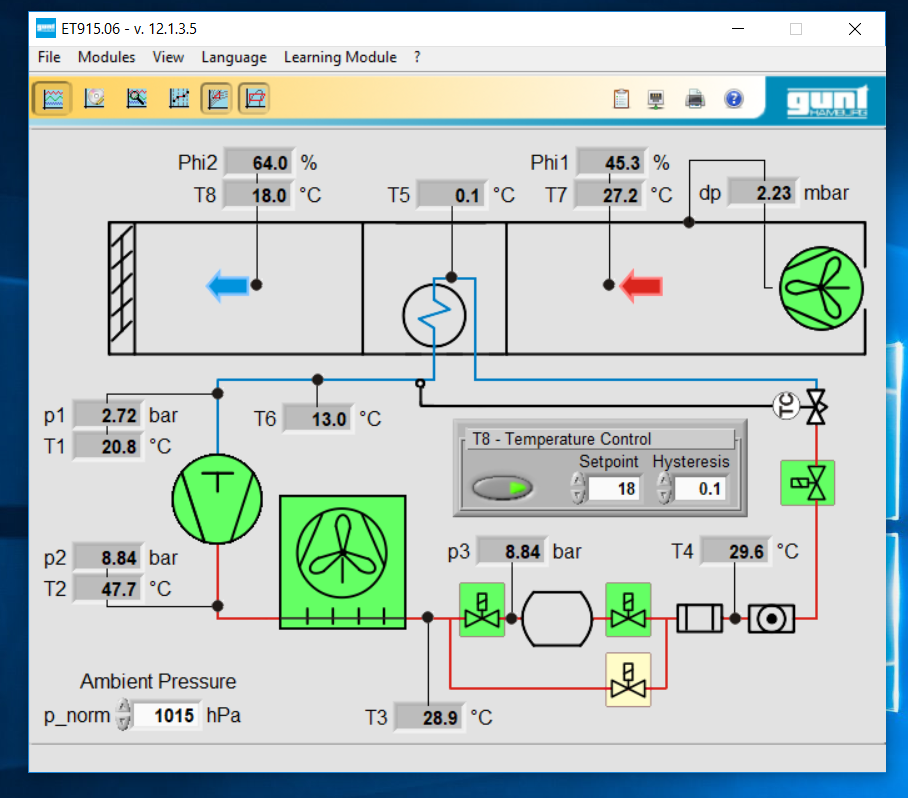 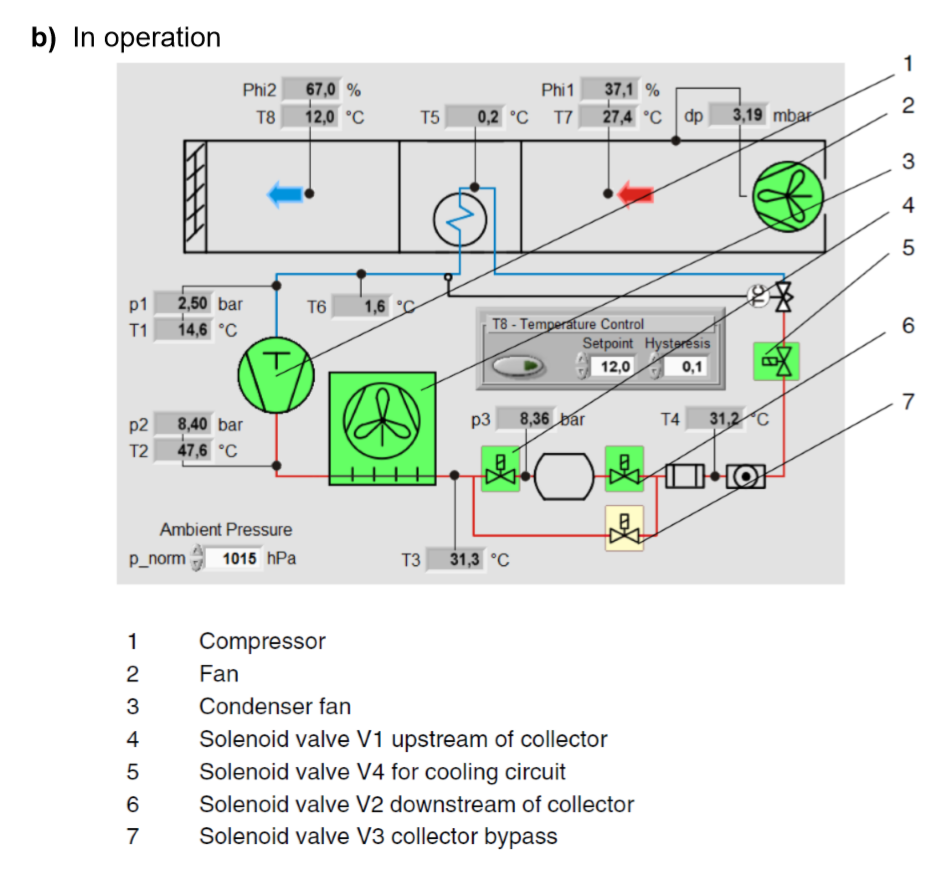 I am trying to understand what is happening between points 1-2 because I thought that because of max isothermal efficiency the gradient of the line shouldn't be more than the constant entropy line between the two points.

Some cooling took place in the compression step between points $1$ and $2$ that isn't shown because lines are easier for a program to draw.

I think the graph as shown suffers from the fact that the cycle is drawn with straight lines from point-to-point instead of curves that would reflect rational design.

That's not to say that the curve shown is impossible. Any movement on a P-H diagram is possible so long as your machine has a cold sink to dump its waste heat and the machine has energy to perform work. However, in refrigeration examples, practicality means you are limited in your movement on a P-H diagram such that you shouldn't cross to lower temperature isotherms below that of your cold sink's temperature unless you are in an evaporation step. Otherwise you're wasting energy in some way or another. For example, the isotherm barrier you can't cross until the evaporation step is the outlet temperature of your condenser. In the drawing that temperature appears to be $36^{\circ}\text{C}$-ish. 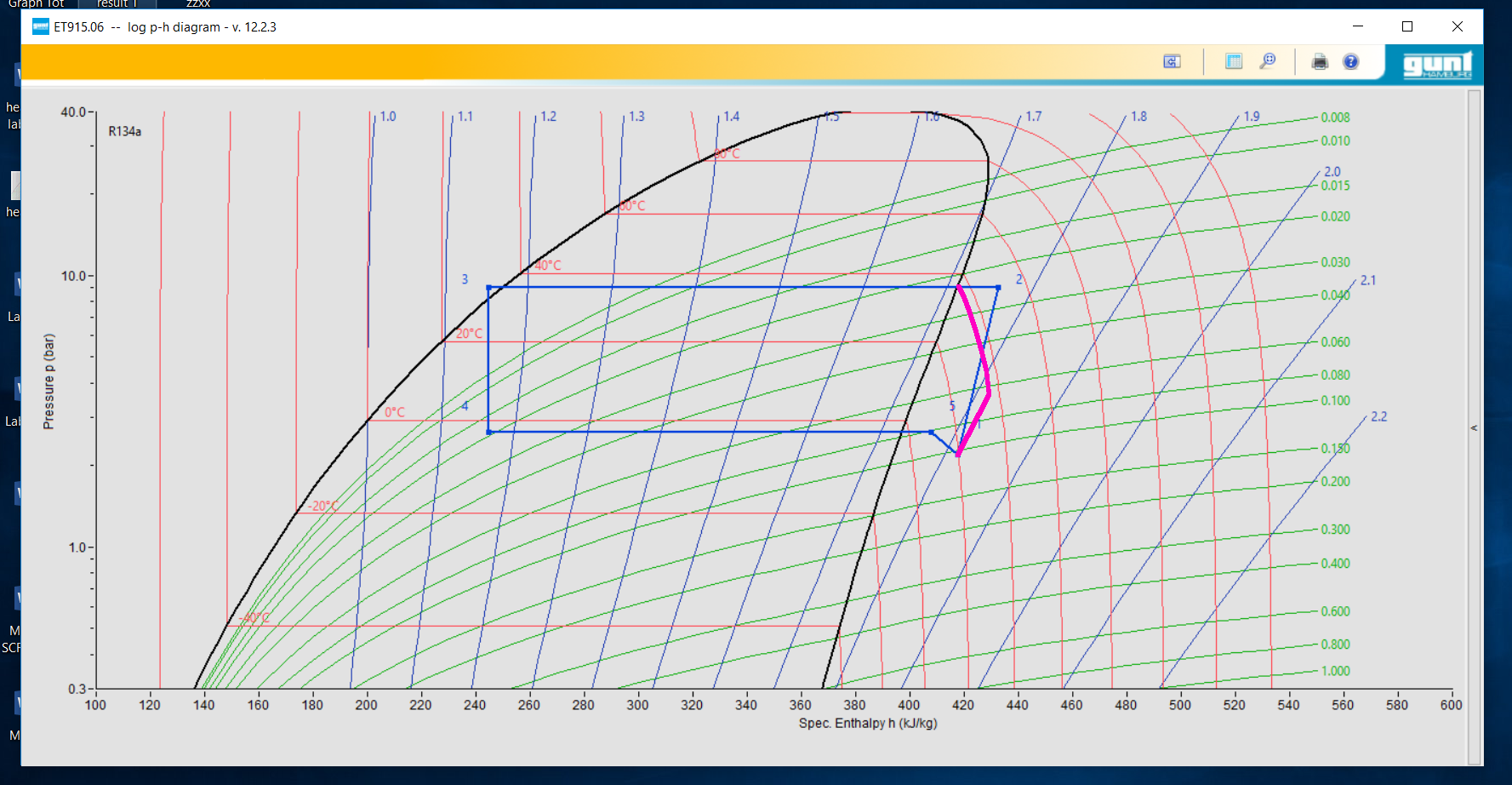 Real world compressor equipment probably would not be able to follow this ideal curve since it is cheaper to simply have one single-stage compressor instead of many compression stages interlaced with many heat exchangers. Also, riding close to the dew point line is dangerous since formation of incompressible fluids damage most compressor types.

My guess for why the $1\rightarrow2$ line is so wrong is because the software generating point $2$ assumed that some cooling took place during or after the compression step and simply connected point $1$ with point $2$ with a straight line because it's simpler to program drawing a straight line.

Also I am not sure how to explain the dip between points 5-1.

The drop in pressure for the $5\rightarrow1$ step is probably due to friction in the piping between the evaporator and the compressor suction inlet. The rise in enthalpy is probably due to imperfect insulation of said piping (the environment warming the cold refrigerant vapor).

Are you sure that the diagram is correct because I believe that point 5 should be at the saturation point on the bell shape curve, and the dip should start after that.

You see 4 to 1 is meant to be constant pressure process in evaporator(that absorbs heat and cause cooling) and after the saturation point constant pressure lines have a negative slope, thus causing a dip in the curve.

A standard process that is generally demonstrated in the books has point 5(and point 1 overlapping) at the saturation point and thus no dip is shown in such a case.

Not the answer you're looking for? Browse other questions tagged mechanical-engineering thermodynamics or ask your own question.

6
Is it possible to fire a ball of water that holds its shape?
8
Air Conditioning Modes of Failure
5
Diesel Cycle Vs. Otto cycle
1
Water vacuum evaporation thermodynamics
2
Deviation of Ideal Rankine Cycle from Actual Rankine Cycle
2
1 Ton of Refrigeration
2
Modelling a refrigeration cycle in Excel
0
If aboard a train being driven along a track by centripetal force, would it feel like you were on a regular straight track?