I have a pretty basic question but I would like to be sure of what I think.

I have a setup like the one in the figure. I have two motors which can generate two forces $F_1$ and $F_2$ perpendicular to the plane of the drawing (coming out of the plane of the drawing). The black box is a rigid body of mass $m$ which has the Center of Gravity (CoG) in the middle (the white circle). We can think about two forces coming from two propellers as on a quadrotor UAV or a helicopter. 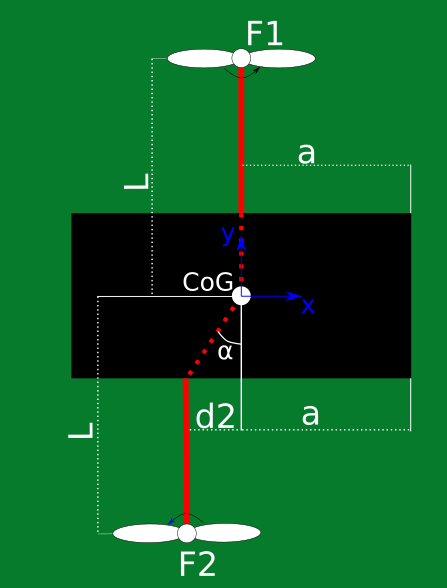 My question is: regarding $F_1$, since the corresponding arm is aligned with one of the axes of symmetry of the body (specifically y), if it will be activated it will contribute in torque terms only to a rotation $\phi$ with respect to the x-axis and therefore the acceleration around the x-axis will have this shape:

where $I_x$ is the moment of inertia with respect to the $x$ axis.

Instead, if I activate the motor 2, corresponding to the force $F_2$, since it is displaced from the axes of symmetry, but still parallel to one of them, I should have:

where $I_y$ is the moment of inertia with respect to the $y$ axis, $m$ the total mass of the rigid body and $g$ the acceleration due to gravity. The term $M_d$ should take into account the torque coming from the motor and the counter-torque coming from the fact that the point of attachment is not aligned with the $y$ axis. I would like to know how to write the expression of $f(\cdot)$ which should be quite easy to do.

Thanks for the help!

One easy way of calculating $I_{xy} \ $is by constructing the Mohr circle.

On the x axis you draw the circle at the centre of:

Then you draw an angle equal to $ 2*\alpha \ $ counter clockwise from Iy on x axis of the Mohr circle and draw the diameter by continuing this angle to intersect the other side of the circle. The projections of these two points on y and x axis are your new $I_{xy}$.

0
Torque in different car gears?
2
Calculate torque for a cam
3
Dynamics of a rigid body in a system of two linear drives
1
Basic intuition for motor torque
1
Torque Required for a stepper motor to rotate a socket wrench ratchet around an axis point
2
Computation of the moment of restoring forces for a floating vessel
3
Modeling rigid body dynamics: Trouble with equations, encountering nonsense answers
0
torque for a machine shaft
0
Torque required to push object hanging from ceiling