I've been trying to solve the dynamics of this system for quite a while, but cannot seem to get the right answer. I've tried solving it with Lagrangian method but I am not so confident with the equations I'm getting.

Firstly, looking at the picture below, 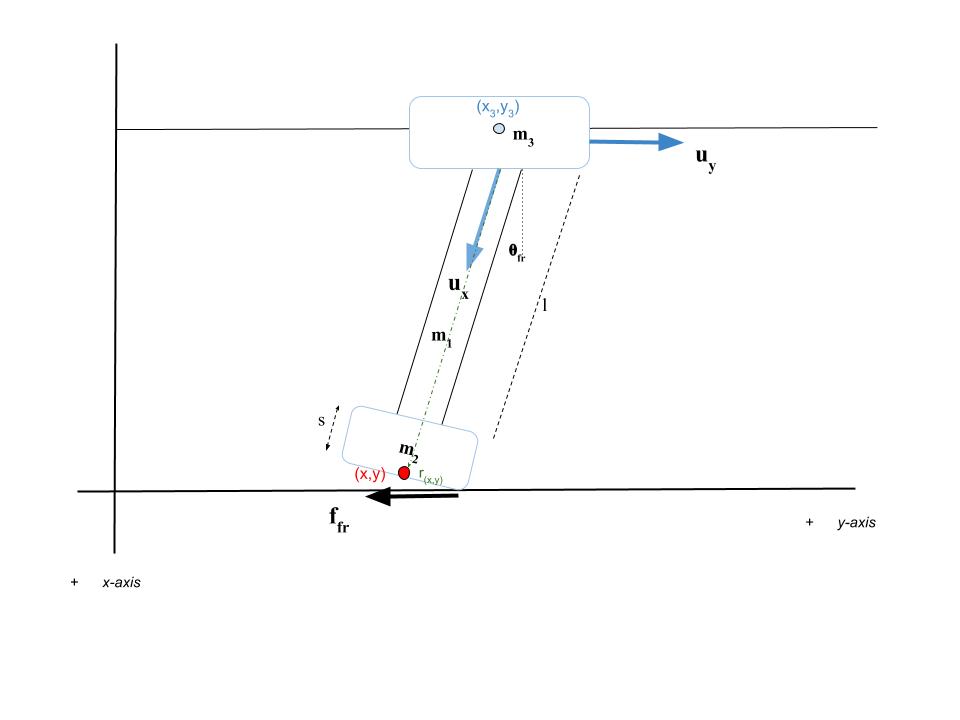 there are three components in the system where 1 is the link between 2 and 3. 3 moves linearly along the y axis and is driven by a linear drive. 1 is actually a linear drive that moves 2 up and down, but because there is a surface when x=0, the friction between the surface and 2 cause 1 and 2 to rotate just as in the picture.

I've been trying to solve the dynamics of this system in terms of x,y,theta, and velocity and acceleration (dot(x),dot(y),dot(theta),twodot(x), etc) from the lagrangian method. But my initial attempt had l to be constant when it actually moves due to ux. I also did not consider the surface to be deformable; the surface in which the linear drive 1 exerts a force of ux deforms as it is not a rigid body. For simplicity's sake, I considered the reaction force from the surface to be f and tried to solve the dynamics again, but got totally confused as I couldn't figure out how much work was being done by f and as there were new variable of l ldot l two dot.

Basically, it would be really helpful if anyone could define the work done by the external force, (the u's and friction and f)as well as kinetic and potential energy of each parts so that I could use them in the lagrangian method.

Also, if you think that there are other methods other than lagrangian to solve for the acceleration and velocity of x y and theta of this particular system, that would also be great.

Thank you in advance.

Basically, the problem to solve is the acceleration of x y and theta at point (x,y) when the linear drives on m3 and m2 are given a force of uy and ux, respectively. I am trying to solve the accelerations in terms of uy ux Ffr theta and f (the springy reaction force of the surface at x=0). m's are all masses, s is the thickness of 2 r is the vector of (x,y) with respect to the the point of rotation.

My initial attempt at this problem doesn't consider l to be changing (but it changes since its a linear drive that gives a force of ux).

i first found the acceleration of x y relative to the point of rotation.

then i used the lagrangian work theorem to derive the following equation:

using the equation above i found theta two dot which i plugged into the acceleration equation of x and y.

This is basically how I attempted to solve the problem and it would be great if anyone could also following this logic to derive a correct answer as opposed to my worthless one.

I am having a really hard time following your setup. First, you have the x-axis as the vertical axis, and the y-axis as the horizontal axis. Is this correct? And then there's a... surface?... when x = 0, and that surface has friction, so that's what's causing your [m2] to rotate.

So basically you're dragging a block on the ground at x=0, is that correct?

But if your "hoist" drive, [1], is actually at zero, which we'll say means that [ux] is actually the length from the surface (x=0) to the trolleying platform [3], then you can't actually have the load [2] drag the surface because that would imply that you have something supporting the load [2] that isn't your hoist drive [1].

In your picture, your load [2] has some width, and you appear to be dragging it about the corner. If you're actually doing this - your load [2] is actually pivoting about that forward corner - then you now need to take into account the rotation of the load [2], meaning also its moment of inertia, etc.

Or maybe it's not actually pivoting, but it's continuing to drag because your hoist drive [1] is "springy" and stretches to allow the load [2] to drag? But the especially confusing thing here for me is that you're asking how you solve for the dynamics of ux and uy, despite the fact that you have actuators on both of those axes.

If you have linear drives on ux and uy, then those dynamics are whatever you make them to be. The only thing you have left to solve for is how $\theta$ is a function of everything else.

Not the answer you're looking for? Browse other questions tagged dynamics kinematics acceleration linear-motion or ask your own question.

8
Dynamics Simple Pulley System - Stuck on the Process
0
What is the advantage of using D'Alembert's principle when dealing with dynamic systems?
0
Dynamics of Mass in Epitrochoidal Motion via Ringless Planetary Gear System
6
System Dynamics Modeling
0
Deriving the equations of motion for free-floating spacecraft with a single link robot arm
0
How to model a driven wheel with no slip
1
Effect of friction (or horizontal motion) on vertical surface deformation
8
Moment equation from dynamics differs with equations from physics & statics. Where did I go wrong?