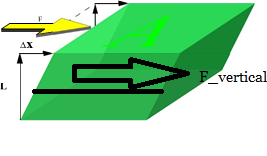 I would like to ask for help regarding the summation of non parallel shearing forces acting on an elastic body. In the image force F (Left to right direction,in yellow) acts on the top horizontal surface "A" of an elastic cuboid body that is attached to the table only at its bottom surface. I know how to calculate the stress and strain. But what happen if a second force "F_vertical" (in black) acts on the top portion of the vertical surface facing the reader, again direction left to right. how do I add the stress and strain imposed by both forces. (I am a physician not an an engineer or physicist ).

There's some ambiguity in your diagram and description because you have one force acting on a point and another force acting over a portion of a surface. Also, although you say, "I know how to calculate the stress and strain [for the first loading configuration]," it's not clear which idealizations you're applying to get these answers.

For example, one possible idealization is that the force $F$ acts over the entire top surface, thus producing a state of pure shear throughout the body. (An equal and opposite force would act over the bottom surface due to its attachment to the table.) Assuming that the $z$-axis points in the upward vertical direction, the original state of stress would be $$\sigma = \begin{pmatrix} 0 & 0 & F/A_\mathrm{top} \\ 0 & 0 & 0 \\ F/A_\mathrm{top} & 0 & 0 \end{pmatrix},$$

where $A_\mathrm{top}$ is the cross-sectional area of the top surface.

(If you don't apply this idealization of $F$ acting across the entire top, then you'll get a stress variation around the point where $F$ is drawn as acting. Think about pushing at a single location on a very compliant material such as a sponge; most likely, you'll see a lot more deformation around the point your finger touches than elsewhere.)

Inside the material, any small element would be subjected to the following stress state:

These four forces are all necessary to apply a state of pure shear upon an internal element; any fewer would result in translation and/or rotation. This stress state becomes poorly defined at the surface because you're not applying any upward or downward forces; the material is effectively generating these forces internally.

So that's just the simple case of a single force! The revised state of stress is more complex. Just slightly inside the material where the force $F_\mathrm{vertical}$ is applied, the revised stress state is

where $A_\mathrm{side}$ includes only the area upon which $F_\mathrm{vertical}$ acts.

Elsewhere in the block, however, the stress will vary. The force on the bottom, which originally needed to resist only $F$, now must resist a torque generated from the off-center application of $F_\mathrm{vertical}$. I don't know of a solution for the general state of stress; you may need to use finite element analysis for that.

Not the answer you're looking for? Browse other questions tagged stresses or ask your own question.

0
Normal and tangential stresses
0
Stresses in a camera mount
2
Resolution of forces and state of stress at a point
0
stress/shear analysis of components
0
Can I combine two shear-stresses acting on one plane?
0
Calculating Forces using equations of equilibrium
0
Shearing Stress at the Boundaries of two infinite Planes