I have a very sensitive scale used for dynamic weighing (by dynamic I mean that the scale and load cells are actually beneath a belt conveyor that actively weight product when it´s being transported along the belt).

There´s a lot of variation in the measurements (+- 8g, while the manufacturer says it should be max +-2g).

I want to rule out vibration as a source of enviromental influence, so I gathered some data with a pair of 3 axis accelerometer dataloggers mounted on the structure beneath the load cells.

I analyzed the data in Matlab and found that the maximum vibration frequency when the equipment is being static is 1.066 Hz (EDIT 3); peaks of 1.33 g in the z axis (perpendicular to the floor).

It´s being a while since I´ve done anything with vibrations and I´m a little rusty on the theory and practical experiments.

I´m not sure what I should be looking for and I don´t have (didn´t find) anything about what the normal structural vibrations are for a lab room or specifications from the scale manufacturer on how much vibrations in can withstand or filter out.

The FFT results in the X,Y and Z axis were: 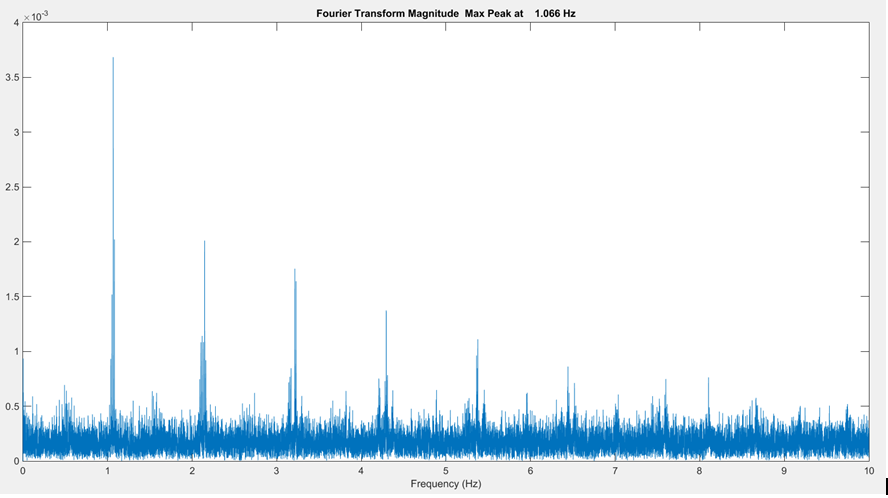 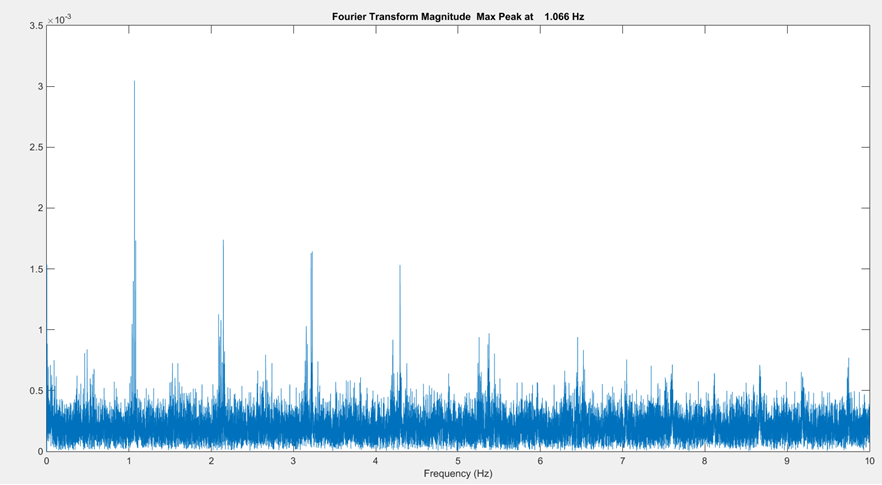 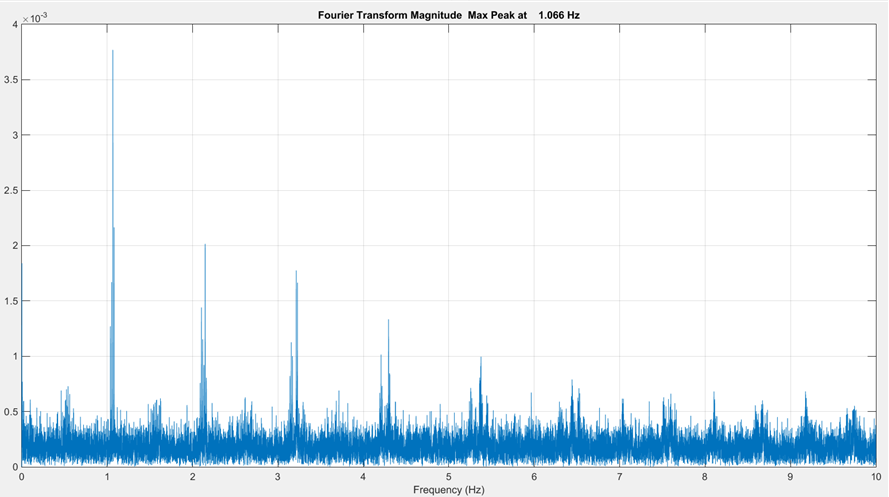 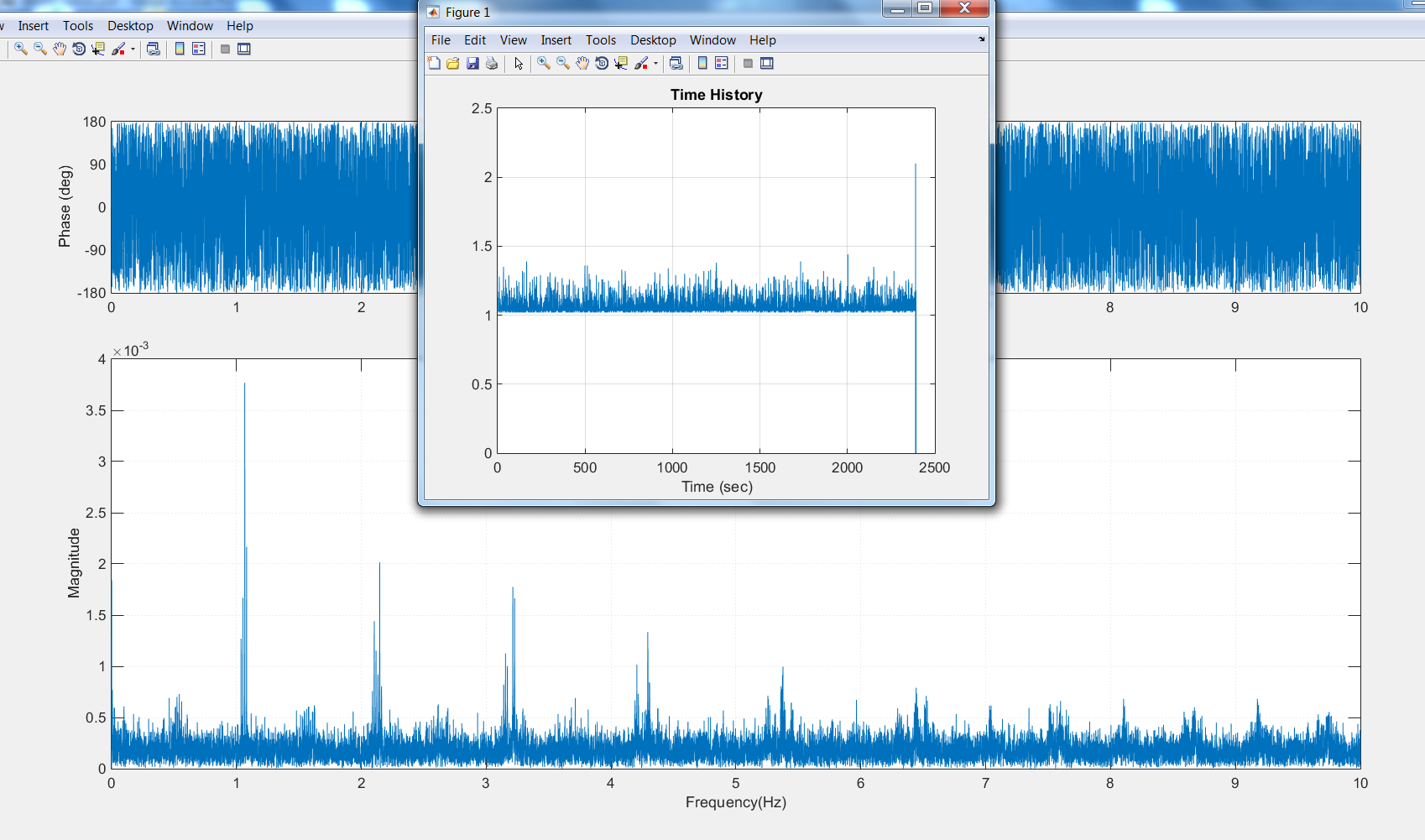 So, look at the time history that you added in edit 3. Notice how it is never ever ever below 1. That's very telling. Let us assume that you have a MEMS accelerometer is able to read down to 0 Hertz. So in the vertical direction, we expect to see 1g due to gravity PLUS the vibration. In other words, we expect to see $y(t) = 1 + A cos(\omega t)$, where A is the amplitude of vibration and $\omega$ is the frequency. Now A may be a function of time, and there might be multiple frequencies, but this is the general idea. So, we expect to see something that is symmetric about 1. Sometimes greater than 1 and sometimes less than 1. E.g. if A = 0.3g, then you'd expect to see between 0.7 and 1.3g. Given that signal, we could do a fourier transform or other analysis to determine the values of A and $\omega$.

But that is NOT what we see here. The value is always positive. So, based on this, and the fact that this is billed as datalogger, and not just a raw accelerometer, I very strongly suspect that what you are getting is not actually the variable y(t). Instead, I think it is an already processed value. i.e. the datalogger is probably sampling a block of time, perhaps 1 second, perhaps 100 ms, could be anything, and then doing some kind of processing, perhaps RMS over that time period. i.e. you aren't getting y(t), but instead something more akin to $\sqrt{\frac{1}{N} \sum y_i ^2} $. Because this is an already processed value, taking a fourier transform of it does not give any meaningful result.

If you work out the math, you'll see that if we take that $1 + A cos(\omega t)$, the RMS value will never be less than 1, which is consistent with the data you posted.

Put another way, when you datalogger spits out a number like "1.3g" at a given time, it is not telling you that the instaneous value of acceleration is 1.3g. It is saying that the average value, over a range of frequencies, and over a certain time range, is 1.3g. There may be various settings to your datalogger, and it might be doing a different type of processing, perhaps it's a peak over a frequency range, or something else. But I don't think you are getting raw acceleration.

if you can compile a correct graph of sensor reading on the coordinates of time versus G, for different intervals such as noticeable changes in vibration, lapses of lesser shaky intervals, you can do a Fourier analysis and sperate the super imposed waves to clean the reading.

Once you find out the vibration frequencies you can design a dynamic insulating suspension to help minimize the undesired vibrations.

Not the answer you're looking for? Browse other questions tagged structural-analysis vibration matlab industrial-engineering modal-analysis or ask your own question.