In a direct evaporative cooler, dry air is passed by a water reservoir to evaporate water into the air, causing the latent heat of vaporization to be absorbed from both the air and the water; this results in the air leaving the cooler at a lower temperature, as desired. An image for this process is below: 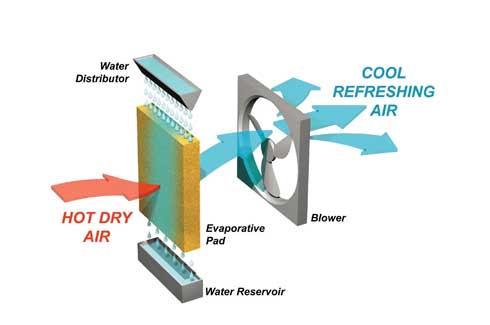 In the type of recirculating cooling tower typically connected to the condenser of a thermoelectric power plant (image below), dry air is passed by hot water coming from the power plant's condenser. This causes water to evaporate into the air, absorbing the latent heat of evaporation from the water and the air, resulting in a lower water temperature, as desired. 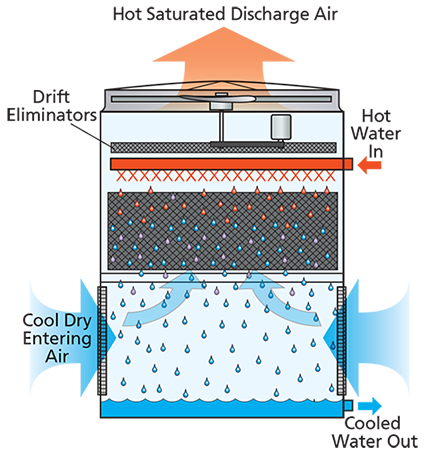 The thing that is confusing me is the fact that evaporation of water into air in the direct evaporative cooler (first image) causes the air to leave the cooler at a lower temperature, but in the recirculating cooling tower, the air leaves at a higher temperature than it came in at. My questions are as follows:

1) What is the main reason for the difference in air temperature leaving each of the respective cooling systems?

2) Is the higher temperature of the air leaving the cooling tower due to sensible heat transfer (from warm water to cooler air) in excess of absorption of latent heat from the air?

Mixing two media (air and water) just averages the temperature between them (proportionally to their respective heat capacities and total volumes) - through classic conduction.

Additionally, evaporation absorbs a large amount of heat, reducing the resulting temperature (of both media) on exit. Rapid flow of large amounts of air speeds up evaporation considerably.

Air has a very low heat capacity comparing to water, so mixing the two will definitely shift the average towards the temperature of water - unless you push volume of air massive enough to make a difference; also, such volume will result in more evaporation - so even if the air is rather warm, the water temperature rise will be low - or even there will be a temperature drop, evaporative cooling outpacing heating from air.

So, in the first case a certain, moderate volume of moderately warm air is passed through cool water; the evaporative cooling is quite enough to keep the water - and the exiting air - cool.

In case of the cooling tower, there's a massive amount of cool air being pumped - enough to absorb (through both evaporation and plain conduction) most of the heat from the hot water. (and make no mistake, the "Hot saturated discharge air" is a very similar temperature as "Cooled water out"; maybe a little warmer as it meets hotter water later, further up the tower.

Not the answer you're looking for? Browse other questions tagged cooling evaporation or ask your own question.

3
Optimum airflow for drying with heated air
4
Can I control latent/sensible heat changes in a counter-flow, induced draft cooling tower using climate?
0
Is circular water cooling reliably more efficient than static air cooling?
2
Calculate amount of evaporative coolers needed to cool down an area
0
How to dump moist air without heat backflow in evaporative cooling system?
3
Why do a swamp cooler and dehumidifier effectively cool a room when paired together in an enclosed space?
3
Does adding cold water to evaporative air coolers actually produce colder air?
0
Does forced convection account for energy transfer in this case?