I have to make a dual blackboard like the one here, http://www.ucd.ie/physics/lhcb/contact/blackboard.jpg, 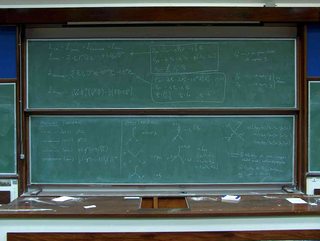 My biggest concern is what sort of mechanisms I should use to allow for smooth and easy movement of the blackboards. The boards need to be brought up and down, and be able to stay in place once they've been moved.

I do have an idea on how to do it with weighted cords and pulleys, but I believe there are people with more experience in this area. I'm not as certain about the mechanisms to keep the boards in place though.

Can someone help identify the parts I need to make one of the board to move up and down? Also, which parts do I need in order to make the boards stay in place after being moved?

The ones I've seen worked the same way old windows did. The boards slide loosley in grooves. On each side, there is a counterweight in the wall, and a rope over a pulley at top. The rope attaches to the board on one end, over the pulley, and to the top of the counterweight on the other end.

The counterweights can be quite large. Each one is roughly half the weight of the sliding board. They were usually round torpedo-shaped pieces of iron with a hole at top sortof like the eye of a needle. That is for attaching the rope. The whole weight could be a couple feet long and 2-3 inches in diameter.

In your case, it's not clear whether the boards are supposed to move independently with a fixed board behind in the lower position, or it's just the two boards you show. If just the two boards, then they can be counterweights for each other.

Boards in such arrangements usually slide on pairs of tracks, one behind the other. Cords from one board go up over a top mounted pulley and down to the other board.
If tracks do not provide good alignment at least two set of cords are needed - one set at each end.
If boards can be slid up without jamming then a central cord may be adequate.

Boards need to be close to equal weight. Weight can be added if needed.

Many ways to lock boards in place are available, but rare earth magnets at bottom and a steel plate on board would work well.
This can provide as positive a lock as is needed. Pulling down on the top board would pull the bottom board free from the magnets.

A modern version of a board system like this could use electric motors - either operating cables or using "lead screws" made from eg cheap industrial threaded rod. The amount of use that such systems would get would make basic nut-on-rod movement systems viable.

7
What IPC mechanisms exist for the i.MX 7 (or i.MX 6) multi-core processors?
0
cycle efficiency for (otto -diesel -dual) at constant Pr & Temp
1
possibility for hydraulic accumulator with no moving parts?
1
Mechanical device that creates friction when rotating?
2
What (if any) are the engineering limitations for producing "simulation" exoskeletons
0
How to mount a rod (rotating)?
0
Why is there still no truly omnidirectional treadmill? (technical reasons)