I have shared the question statement, its diagram and my solution but my solution is wrong and I have no idea why is it wrong, please help me out. 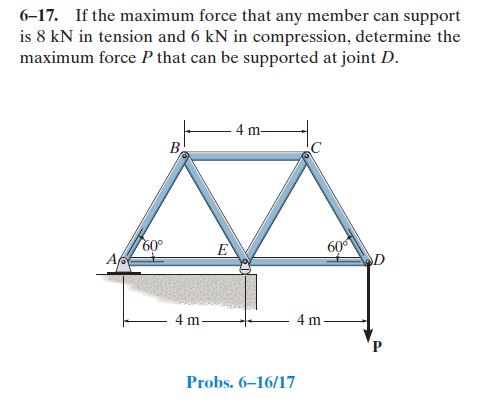 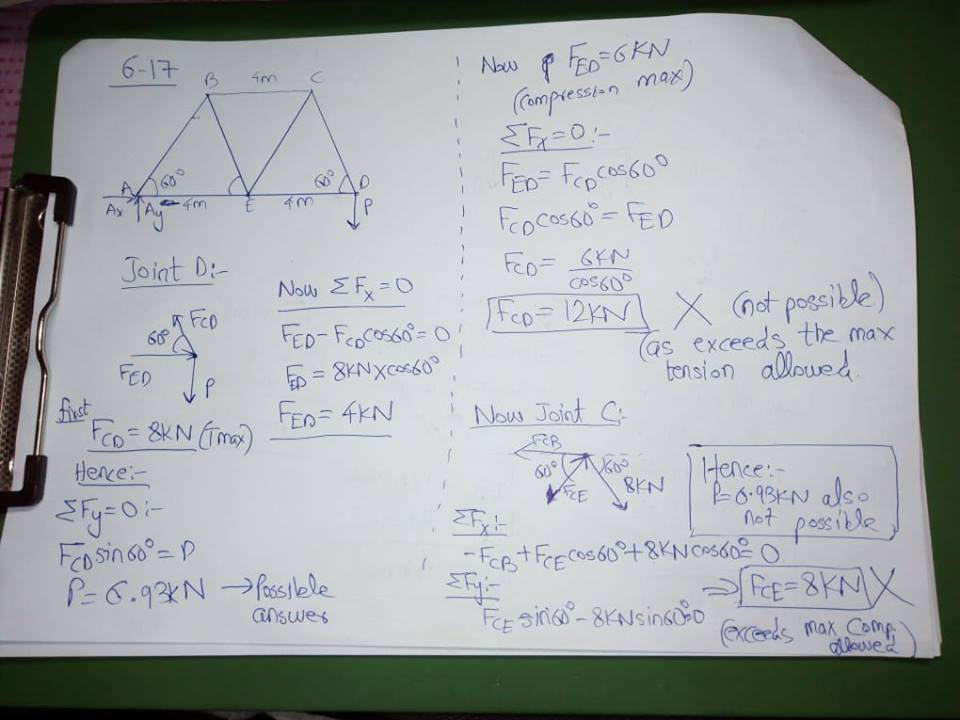 you should think first about the whole structure, and then look into each joint. Apply the sum of the forces on the horizontal, the sum of the momentum and vertical forces must all be equal to zero to the structure as an object, similar to what you have been doing all the course.

I have found a mistake on your solution since you didn't consider the first gender support in $E$. Correct that and try to express, in the equations of ballance, expressions for the reactions relative to $P$ from the equations of equilibrium of the whole structure. This will result in a problem which will be in function of $P$. In this step $R_a$ and $R_e$ will be, if my calculations are correct, $3P$ and $2P$ in modulo, respectively.

Using method of joints we can calculate the maximum compression according to the values given being 6kN. As that strain is greater than 8kN we should assume 6kN to be achieved first.

Force P should not exceed the maximum compression value of 6kN at the vertical component of the truss CD.

There is no way that tension can even come close to 8kN in the truss without exceeding the 6kN compression.

3
Is the Qmax of an T-Beam equal if calculated both above and below the neutral plane?
10
Where did I go wrong conceptually when attempting to calculate the maximum force on a truss at a given joint?
1
What is the distance at which the triangular UDL is acting on in this problem?
0
Statics problem: Finding resultant force angle measured counterclockwise from positive x-axis
0
Statics problem ignoring horizontal reactions seems to require horizontal forces
1
Statics Distributed load question
1
Statics Two Force Member Problem