How linear motion is getting converted into rotational motion in this early toy?

Can someone explain about the mechanism in this folk toy: 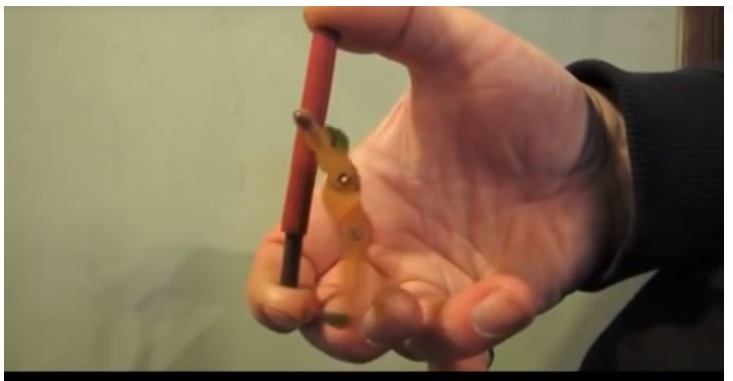 What exactly is going ne? I believe the mechanism is not uncommon and someone from this background could throw some light.
Thanks in advance for your help.

"The penny toy works by friction on the pin against a piece of rubber tubing." The quote is from the audio introducing the toy.

This is the equivalent of a rack and pinion without gear teeth, but using friction to operate.

A video explaining the gear-based rack and pinion can be found on The YouTube with the distinction that the toy uses rubber in place of the teeth of the gears. I believe that the rubber portion could be on either the linear rod or on the rotating portion, or both.

Not the answer you're looking for? Browse other questions tagged mechanisms springs or ask your own question.

3
How this radio knob converting a rotation into a straight-linear motion?
1
Rotary to linear motion - how to make upside down “hammer” mechanism?
0
How to debunk this "Perpetual Motion Machine?"
4
How is linear motion achieved in this automatic blackboard eraser?