I'm working on a PID-controlled barn door tracker mount for astrophotography in an isosceles configuration: 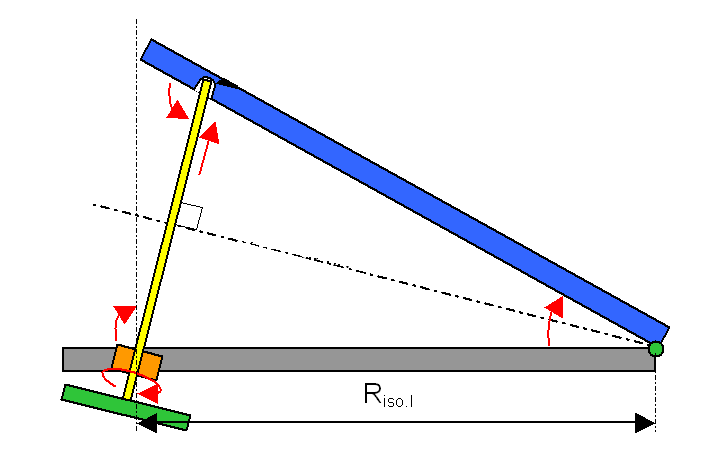 A lot of people use a curved bolt configuration to make it so you can simply set the motor at a constant rate of rotation and get a constant angular rate, but I don't like the inability to address sources of error with that configuration. Instead, I would like to use PID control.

My motivation is both for a fun project, but also to create something that is more accurate than a curved-bolt configuration and cheaper than entry-level equatorial mounts. Ignoring the cost of microcontrollers, I'm aiming to have the entire setup cost less than $120. If I can't make it for that cheap, then I might as well get a professionally-made mount.

I've been looking at different methods of getting angular feedback, and I'm most interested in two: encoder and accelerometer. An encoder would be fairly easy to implement in code and resolution could be influenced by hardware. However, a quadrature encoder would use up almost half of my budget, and I'm skeptical of using just an incremental encoder, in case my PID tuning is off. Not to mention I would have to implement an additional way to home the tracker.

After playing around with an app that lets me see the sensor outputs on my smartphone, I wondered whether an accelerometer might be a cheap alternative. There are plenty of sensors that are USB or Arduino-compatible out of the box. My biggest concern, however, is that of accuracy. The angular change is only about half a degree per minute, but in the isosceles configuration, the rate of the motor must change accurately to maintain a constant angular speed. I need something that will be able to capture that slow of a change accurately.

I'm not a controls or robotics guy, so for all I know I'm completely missing some other component that might fit the bill. Any thoughts on the advantages or disadvantages of the sensors I've mentioned? Or places I might look for more affordable types of sensors?

Since this application doesn't require continuous rotation, rather, it shuttles between limits, you can use a rotary potentiometer to provide angular feedback. Most 'standard' Pots have 270 degrees of rotation, so you would need to add some gearing - I'd recommend pulleys for this since the forces involved are very low, and you don't want backlash. Then simply set up the Pot as a divider, and use the analogue read pins to measure the voltage, and hence the rotation.

Have a watch of this video for an example of this theory being implemented: https://www.youtube.com/watch?v=3pYWLF8qw-g

Not the answer you're looking for? Browse other questions tagged positions-measurement or ask your own question.