A motor is used to drive a shaft that is geared through 1:1 bevel gears to a propeller. The shafts are mounted on bearings in a hard casing that is attached to a 2nd ground. I want to know if the 2nd ground needs to react any of the torque produced by the motor, to stop the whole casing rotating? If so, how much? Any help would be greatly appreciated. I have tried sketching the system below for clarity. 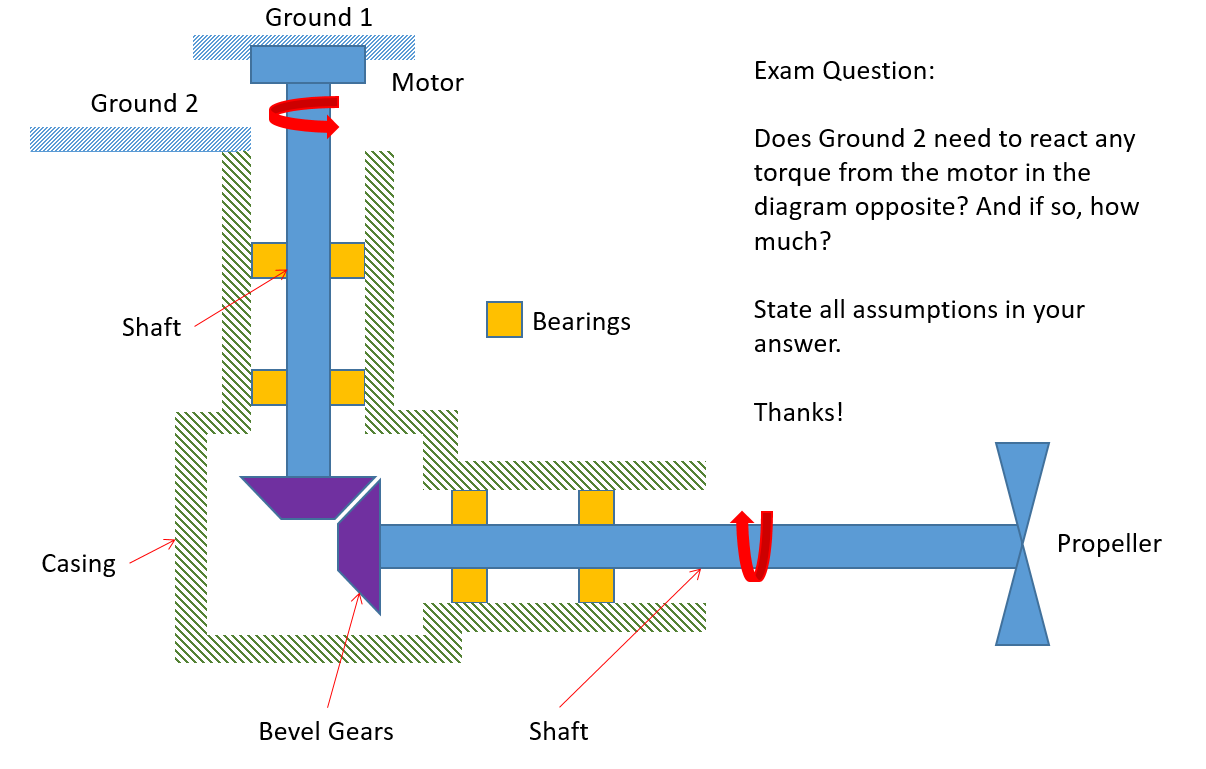 Yes it has to react.

Say your engine can generate a maximum of 150 Lb-Ft torque. And you attach to the ground or back of a boat by a bracket which has 2 bolts on 16 (1.33 Ft) inches apart.

your bracket has to be able to resist the:

pull out tension on one bolt and push in compression on the other one.

Imagine you block the propeller entirely, say, fuse it to the casing, or tangle it in a huge wad of fishing net that causes huge drag (or instead, just fuse the two gears together, so they can't turn - oh, say, put a wrench between them.) In this case the motor, through the shaft and its bevel gear will try to spin the entire assembly of the propeller, its shaft, its two bearings, the lower bevel gear and the entire casing, making the whole thing turn around the motor shaft.

the gears and the propeller. The upper two bearings are negligible, as they only transfer as much torque as their internal friction. But any torque put by environment on the propeller will be applied to the gear, and transferred to ground2 through the two lower bearings.

There will be some extra torque from friction of two upper bearings and the bevel gears, but that's just losses, as opposed to torque from the work done. I believe the torque will distribute equally between the two grounds, assuming ground 2 surrounds the casing instead of just being attached to one edge.

Not the answer you're looking for? Browse other questions tagged mechanical-engineering gears torque mechanical or ask your own question.

4
Advantages and disadvantages of bevel gears
4
What is this contraption?
1
Driving many parallel shafts from one motor
0
How can I calculate final gear ratio when the drive train contains multiple gears with some reductions on the same shaft?
1
Bevel gear design & usage
2
Geared stepper motor engage/disengage mechanism