Resulting torque on the cross section 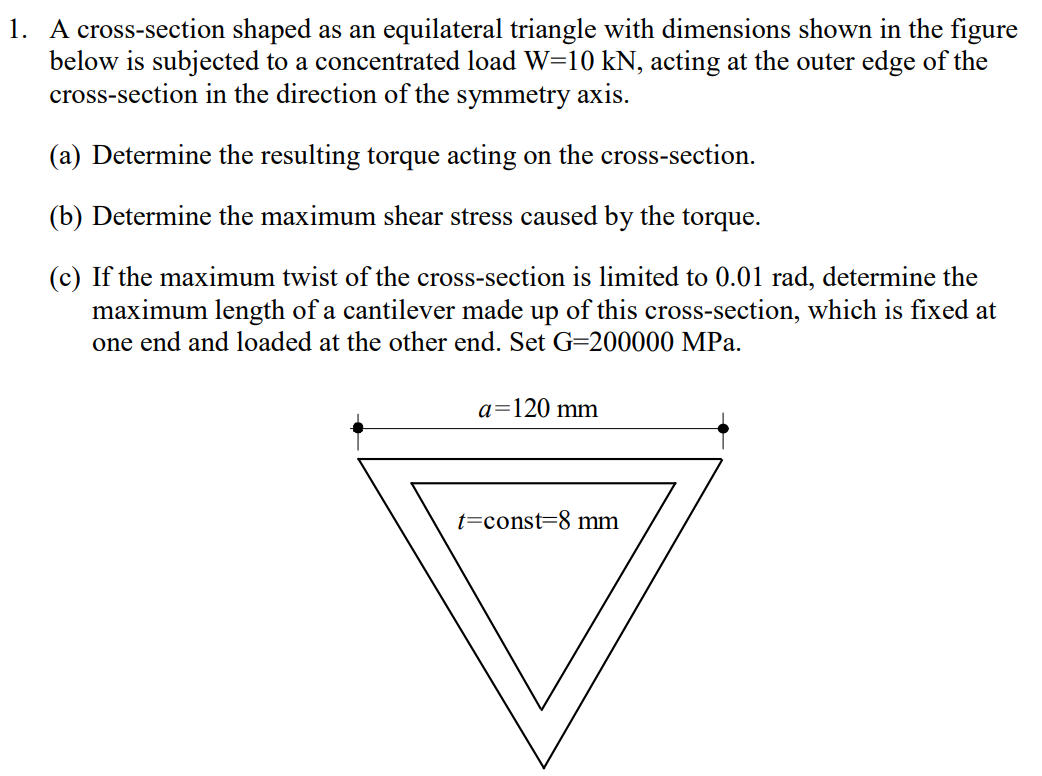 I have trouble solving part A of the question. I thought the resulting torque would just be 10k * L of the beam.

Your suggested solution indicates that you seem to be confusing torque with bending moment. This is understandable since they are often used interchangeably in common parlance.

However, they mean very different things in engineering. To understand the difference, it's important to clarify the standard notation for a beam's local axes:

So, given that, we can then state that:

So, the calculation you expected of $\text{Force}\times\text{Length}$ would give you the bending moment of the beam, not the torque.

However, the general gist of your solution is correct: both bending moment and torque are equal to $\text{Force}\times\text{Distance}$. However, to calculate the torque you need to use another distance.

The question states that the force is "acting on the outer edge of the cross-section in the direction of the symmetry axis." From this we can conclude where on the section the force is applied and in which direction it's pointing:

So now we just need to calculate the torque itself. The force is vertical and on the left- or right-most edge of the section. Since the force is vertical, the torque is calculated by multiplying it by a horizontal distance. The relevant distance in this case is to the beam's centroid, which runs along that vertical axis of symmetry. Therefore the distance is equal to half the section's side, so $120/2=60\text{ mm}$. Therefore

I had to put that $\pm$ sign because the problem as stated doesn't give us enough information to know whether the resultant torque is positive or negative. That depends on where the load is applied (left or right-most corner) and the force's direction (positive or negative, though I suppose one could argue it should be in the positive "direction of the symmetry axis"... which itself is unclear since we can't necessarily assume the positive direction is upwards).

In a thin walled open tube of uniform thickness J is;

t = thickness of the wall of tube.

So this is the answer to first part (a).

Not the answer you're looking for? Browse other questions tagged torque beam or ask your own question.

23
Understanding required torque for a motor lifting a weight
14
Calculation of Clamping force from bolt torque
3
Would friction forces impact a torque measurement transmitted through a gear box
4
Natural frequencies of an orthotropic bending beam with circular cross-section
0
How to use the moment-of-momentum equation for water flowing through a pipe?
1
What is meant by the rotation capacity of a cross section?
1
Multiple varying cross section beam with uniform loads
0
Cantilever beam
3
Fun Force Problem - Basic Structure of Two beams supporting weight