Can I use a wooden flat screw head with a washer to mimick a pan head screw?

For example - I am installing a fold up table from Ikea, it needs to hang from the wall, as shown below. 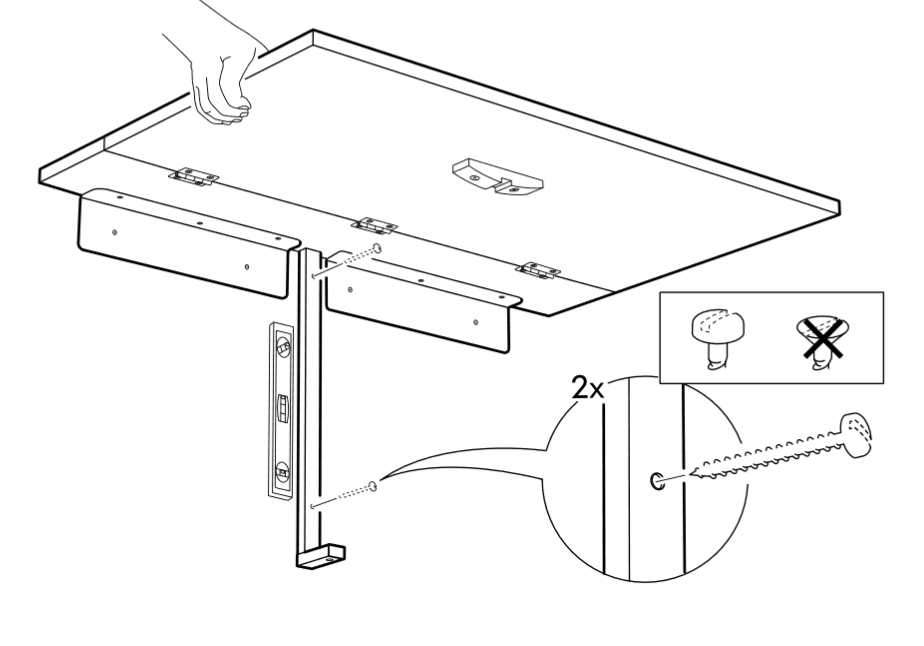 It explicitly says to use pan head instead of flat screw heads like shown in the picture, I would drill into hollow concrete and will use nylon anchors but my question is, would a washer on a flat screw head be a hack here to do the job of the pan head screw?

It seems reasonable to believe that the flat head (countersunk) screw would apply enough force to split the wood, hence the restriction.

If you use a flat head screw and the washer prevents the countersunk portion from exerting wedge-type force on the wood, you will have accomplished the objective.

Consider also that if you use a fender washer (large diameter), the compression force is going to be distributed over a wider area, providing more confidence in not damaging the wood brace.

I assume that the 'leg' is tubular steel with pre-drilled holes.

The problem with using countersunk screws is twofold, firstly that countersunk they will only make contact with the very edge of the hole and are likely to deform it over time and effectively become less tight. In this sort of situation you want the fixings to be providing a clamping force rather than being loaded in shear.

The other issue is that the screw heads won't sit flush with the surface which doesn't look very neat and can leave a sharp edge protruding which can snag on things.

Using plain washers may help with the first issue, at least to a degree but not the second. You can get cup washers which are have a recess to allow countersunk screws to sit on a flat surface

but then again anywhere which sells cup washers is also likely to have flange or pan head screws whcih is what you really want.

Not the answer you're looking for? Browse other questions tagged bolting drilling or ask your own question.

7
What method can I use to make a pivot point in an aluminum linkage?
0
Correct term for non-countersunk flat hex screw/ bolt?