A sphere of radius R, made from material of specific gravity, SG is submerged in a tank of water

... The sphere is placed over a hole, of radius a, in the tank bottom. Develop a general expression for the range of specific gravities for which the sphere will float to the surface.

I've attached the diagram for the problem.

I'm sure I'd have to take the hole that the sphere is resting atop into consideration, but I'm not sure how to go about that. My only ideas on how to include that would be to include the force from the ambient pressure on the bottom of the ball pushing upward in the force equation, but even if that effects the specific gravity at which the ball will float, once it started to float and that force was no longer there, the ball would simply sink again, unless $S.G.<1$. My other thought was that I would have to consider the volume of the sphere not submerged due to the hole and thus not contributing to the buoyant force, but I have no idea how to calculate what that volume would be.

Is my first solution correct, that $S.G.<1$ would cause the ball to float? That again feels too simple for the given parameters.

Any direction would be appreciated. 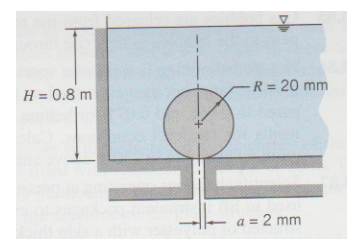 The net force on the sphere due to the water around it is obtained by integrating the pressure as a vector at each point around the area of the sphere.

The relationship between $d_b$ and $\theta, \phi, R$ can be developed by geometry. The vector relationship for $p$ can be developed based on position $(r, \theta, \phi)$. Assume the pressure is otherwise isotropic (it only depends on $d_b$ not on $\theta$ or $\phi$. For a free-floating sphere, the double integral becomes $4\pi R^2$. But ... the segment of the sphere at the bottom where no water exists must be dropped from the integral in this system. Alternatively, the accurate approach is to replace the pressure over only that segment with an integral where $p$ is constant (at $p_o$). The double integral does not easily become just $4\pi R^2$ because of the change in limits on $\phi$ and $\theta$.

The request was for a hint at the right direction, not for a complete answer. In due respect to this (and indeed in great appreciation that you want to do the work yourself once you know how to start), I leave the grunt work, as one might say, as an exercise for the reader.

There are some points and some assumptions we need to make.

If these are taken care of then by doing a bit of geometry we see by your sketch the hole is very small compared to the sphere, we can assume small angles, 9 degrees.

3
Calculating the buoyant force of a rising bubble
5
Does opening a tap in a sink affect the radial speed of the water around the jet?
4
Determining mass flow rate and exit velocity of compressible flow
1
Can a gas rotameter be used for liquids?
1
Unknown value in solution of continuity problem?
1
Can I make check valve in simple workshop?
0
Archimedes Principle Question
0
Resultant hydrostatic force on a gate for a fluid that doesn’t reach its center of gravity