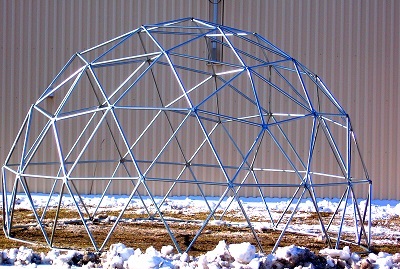 I would cover a geodesic dome frame with clear poly plastic sheeting.

I can purchase clear poly plastic in almost any rectangular dimension (either as narrow house wrap or as wider greenhouse poly).

When I've researched this sort of setup online, I've found lots of photos of attempted wrapping jobs. Unfortunately, when the poly is wrapped around the dome, it ends up looking as ugly as sin. There ends up being lots of overlap and/or loose areas, which have the added disadvantage of being noisy in wind. 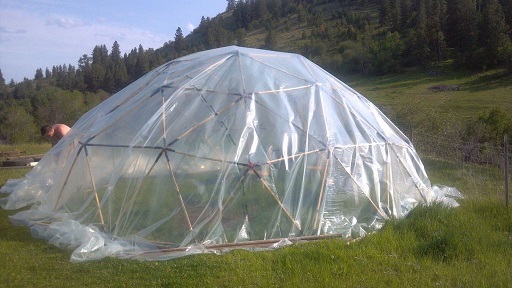 What method of wrapping a geodesic dome would result in the least amount of overlapping and loose areas?

Minimising overlap and loose areas at the same time will be very difficult. It may be possible to source a material that you can ‘shrink wrap’ on, eg using heat, but I don’t have specific pointers there.

Regarding laying a flat sheet, your key aim here should be to have regular overlaps. See tutorials on wrapping circular objects https://youtu.be/dH_gpSfaA6E or industrially wrapped spheres such as old golf balls, or Chocolate Oranges (if you’re from the UK!)

I've been fascinated with geodesic domes since the seventies (last century) and had given some thought to the problem you face. Unfortunately, there is no single-sheet solution to this puzzle.

You may have noted that a geodesic sphere from which the dome is built is constructed of pentagons. You can determine the frequency of a dome by counting from the center of one pentagon to the next the number of struts.

As such, one can cut a sheet of plastic to match the individual pentagons, but it still means that you have to slice a single segment in order to either tape flush (butted) or overlap on the pentagon each sheet. You can get reasonably tight coverage in this manner, but one may consider the taped joints to be unsightly.

The remaining segments that are not pentagons have to be attacked individually. Your selection of a 3v dome gives you a bit of an advantage in that the remaining segments are hexagons, with a center point, with radial struts of the same length, which can be approached in the manner of the pentagon.

Some geodesic designs use individual triangles for construction, which results in duplicated struts at every connection, effectively doubling the material along each path between vertices. This would allow you to pull the plastic into the joint rather than to have to tape or otherwise fasten the plastic to the outside. Think picnic tablecloths draped over the edges, while butting another table against it.

In the case of your EMT based product, this is impractical, especially as it doubles the cost of materials.

You could create an add-on solution by attaching furring strips or similar panels to outline the pentagons and hexagons, using them as clamps to secure the plastic to the EMT. It would still be necessary to slice one sheet per pentagon and hexagon to pull the perimeter tight and secure with the clamping system.

I would hesitate to drill that many holes through what is relatively flimsy EMT and instead would create a hot dog bun or I-beam type of attachment, which would allow for the bolts securing the wood to the EMT to pass alongside the EMT rather than through it. 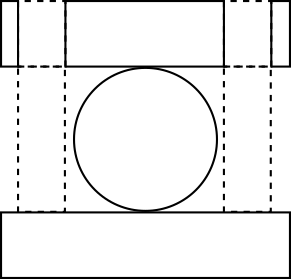 One characteristic I recall from my years of reading of construction and pondering geodesic domes is that homespun solutions always had leaking problems!

Silicone caulk/sealer may be desirable to provide additional leak protection.

This is kind of old but I have been investigating how to do this myself and I wanted to share what I have found so far.

TL;DR: It is not possible to wrap a flat sheet around a spherical (or semi-spherical) shape without having some amount of "excess". If you don't manage it somehow it will just "flap around" looking ugly and noisy with the wind.

Option one: use a double layer cover and blow air between both layers with an air blower. The extra layer of air between layers will act as thermal insulation, and the outer layer will be mostly flat. The downside is of course some continuous energy use, and noise.

Option two: put the excess in the hubs. This is what the Zip Tie Domes guys propose. Their hubs are big enough so that you can attach a sheet to them via some zip ties, and leave excess plastic in the center hub. It is described in detail here:

I am reproducing the most relevant part here in case it falls off internet: 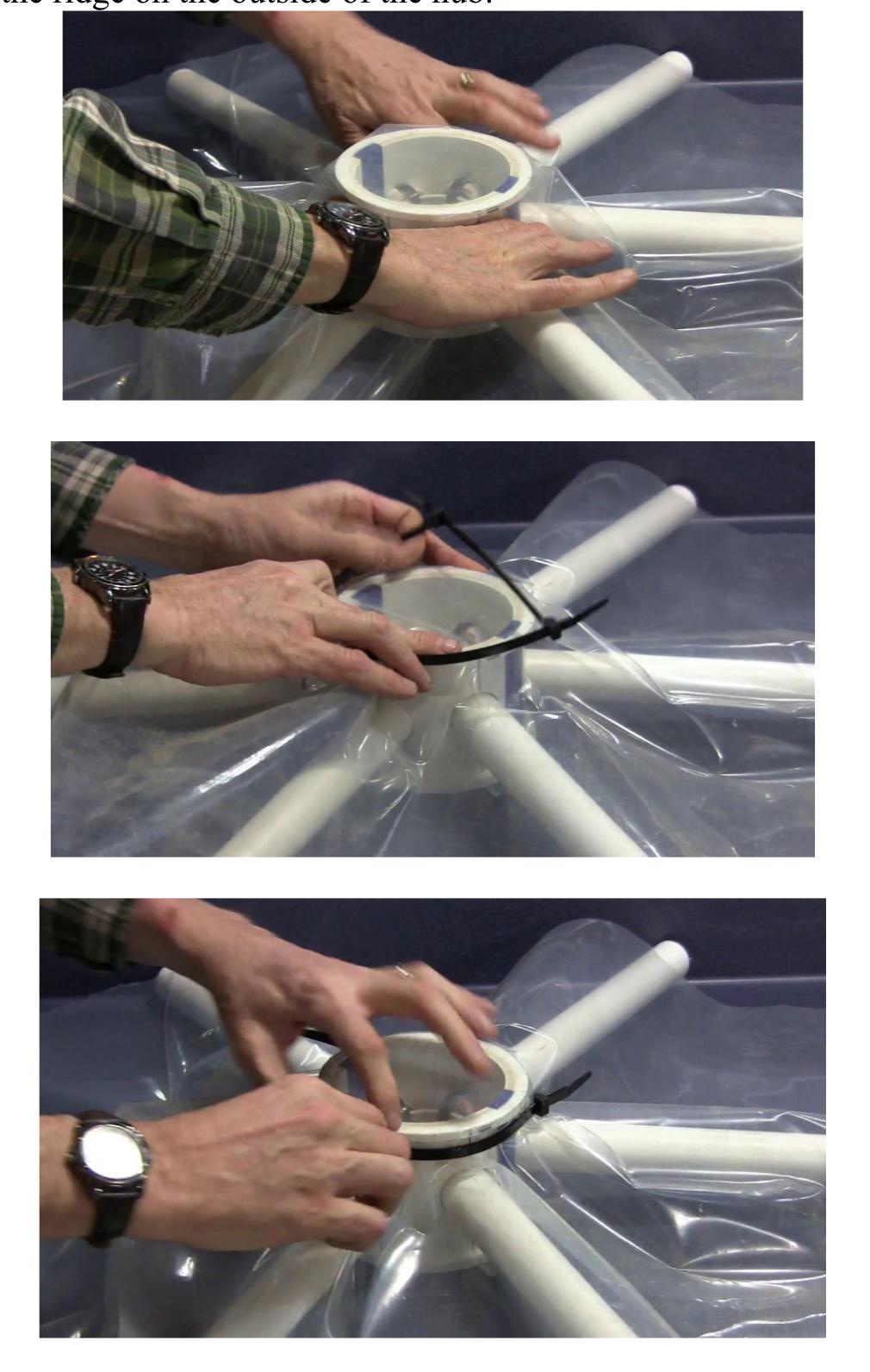 You would get a "virus-like" appearance, with flappy bits of cover on hubs, but otherwise the faces would be fairly flat, provided that you managed to make the plastic tight enough. I would suggest starting with the loose zipties and gradually tightening everything up. Don't try on a windy day!

You can use this approach even if you are not using Zip Tie Hubs - you could add bits of tube protruding bolts from your nodes - just need something for the zip ties to attach to.

Option three: give up on using a flat sheet, and cut it in pieces. If you are willing to go this route, then the game becomes minimizing the amount of cuts and seams.

Here's a video from Paul Robinson in which he details several ways to approach this.

Here's a screenshot that should give you a general idea about how this is done:

Notice that the dome he covers on that video is not a "standard" one! Apparently he deformed some of the triangles in order to allow for easier cuts. Please watch the video for more details.

EDIT: Here's an extra video where he explains how he wraps the sheets around the parts. Key takeaways:

Option four: consider other materials besides poly sheets. In particular, I am a huge fan of what Atelier Kristoffer Tejlgaard did with their Dome of Visions series. 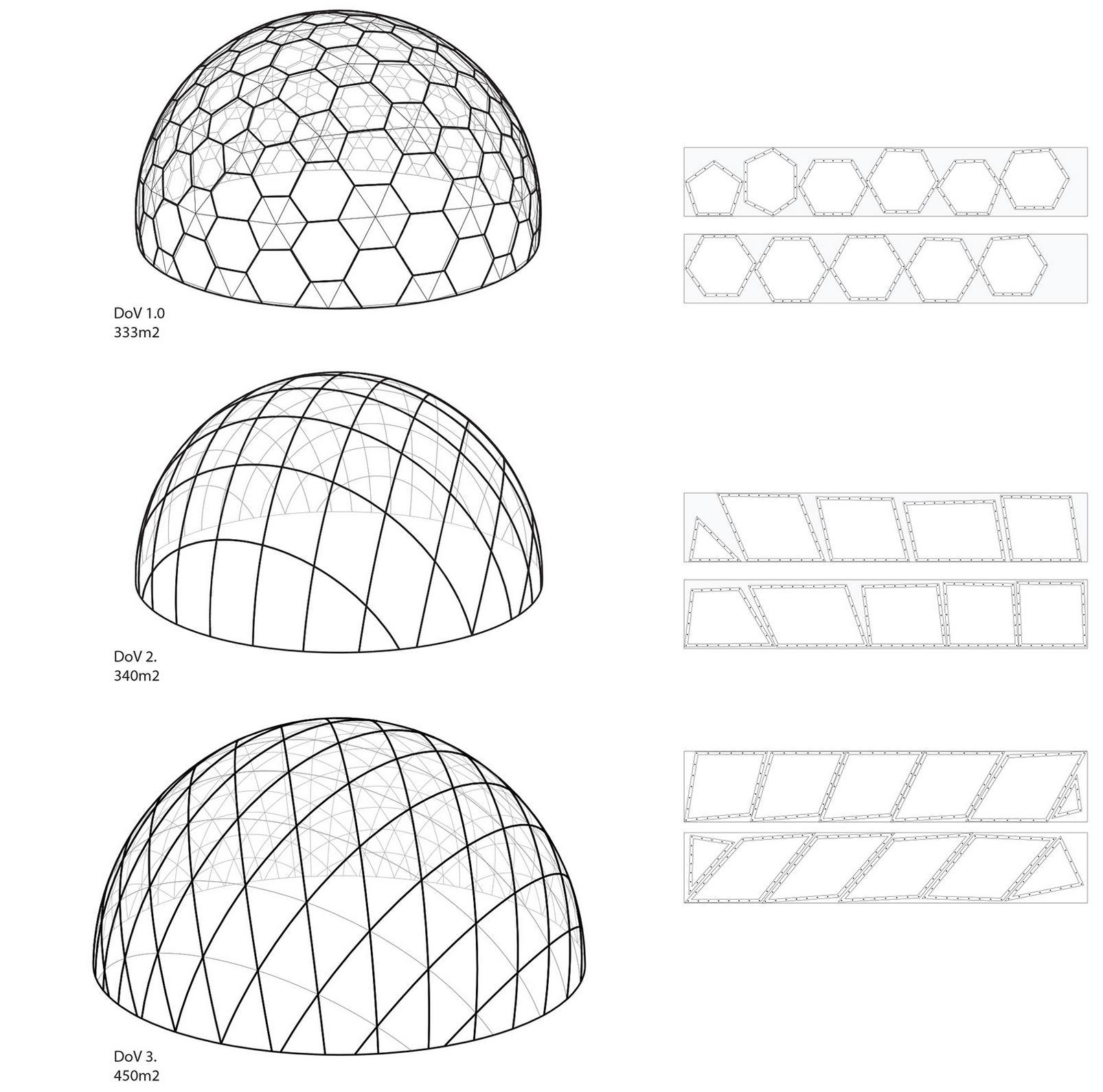 They used 6mm transparent polycarbonate, which comes in flat sheets, but allows for certain curvature. They used rhomboids to maximize the amount of material they used, while keeping seems to a minimum. The rhomboids overlap on their borders as fish scales, so that water would naturally flow out. And the cover is separated from the wooden structure so that if water somehow gets in, it can flow out. It also uses curved struts and custom hubs, which are probably out of most people's budgets.

A similar structure could be done with thinner polycarbonate, which would allow for more curvature. Something more similar to The Troplet, by the same studio https://www.behance.net/gallery/59391165/The-Droplet, which is gorgeous and self-sustaining.

But coming back to earth, one could envision a cover done with more common and cheaper twinwall polycarbonate which takes some of the lessons from Dome of Visions using rhomboid fishscales and some separation between structure and cover.

Not the answer you're looking for? Browse other questions tagged geometry or ask your own question.