How can “mpg” be high under low engine load?

Let's say a car at 60 mph requires roughly 20 hp to maintain its speed (i.e., to overcome rolling resistance and drag).

If this car makes 240 hp and gets about 34 mpg (not too unrealistic), how is it getting 34 mpg if the engine is only at 0.05 efficiency? I know modern automobiles are supposed to have an efficiency limit near 25-30% thanks to Mr. Carnot:

I feel like gearing must be part of the answer but I'm having a hard time understanding just how the gearing allows the engine to generate 20 hp while clearly be at a higher efficiency than indicated on the chart for low engine loading.

Maybe I'm not getting exactly what the engine loading is referring to?

When you cite an efficiency of 25-30% for an internal combustion energy, you're talking about the thermodynamic efficiency of the engine. This is, at the theoretical level, based on a temperature differential. It has nothing directly to do with the fuel.

When you cite a fuel economy of 34 miles per gallon, you're now talking about something that depends a great deal on other factors—for example, the energy density of the fuel. How much extractable energy is there in a gallon of gasoline? How about a gallon of antimatter? A gallon of chocolate milk?

Many engines can accept different fuels, or fuel blends, with different energy densities, without a significant change in their thermodynamic efficiency. For example, ethanol is blended with gasoline, but has an energy density about 30% lower than gasoline; a gallon of one is not equal to a gallon of the other.

I feel like gearing must be part of the answer but I'm having a hard time understanding just how the gearing allows the engine to generate 20 hp while clearly be at a higher efficiency than indicated on the chart for low engine loading.

Maybe I'm not getting exactly what the engine loading is referring to?

When the car is not accelerating, engine loading comes from whatever forces are acting against the motion of the engine. Internal friction (pistons, crankshaft, transmission, etc.), external friction (tires on road surface), drag, gravity (when going uphill). "Load" means how much power is required of the engine for the car to have some speed and acceleration.

As you point out, when a vehicle is cruising on the highway, it only needs a small percentage of its total available power output to maintain speed. Unless we're talking really high speeds and/or an exceptionally gutless wonder of a car, cruising on the highway just isn't a high-loading situation. Your confusion seems to come from the fact that vehicles get better fuel economy when cruising at highway speeds than they do while accelerating.

The key thing to realize is that getting better fuel economy doesn't imply that the engine is operating at a higher thermodynamic efficiency because there are many other factors that go into fuel economy. The thermodynamic efficiency of the Carnot cycle is only one of those factors. Another factor is the efficiency of the combustion reaction (which is technically not part of the Carnot cycle). Another is how much power is being used to accelerate the vehicle (useful work) versus how much is being lost to friction, drag and conduction (waste heat, $q_{out}$).

Consider the following relationship—where does engine loading come in?

In an idealized situation, with no drag on the vehicle, minimal internal and external friction, driving on a horizontal plane, the power required to maintain any speed is effectively zero. This means the load on the engine (when not accelerating) is also effectively zero. The Carnot efficiency is irrelevant at this point, but it would be very low as well. However, the fuel economy would be enormous because you have some $v$ in the numerator with nearly zero $Q$ in the denominator.

The opposite situation is even easier to demonstrate; you can do it at home in your own car. Just floor the accelerator with the transmission in neutral. (Don't actually do this.) Instant high load scenario as you accelerate the hell out of that crankshaft but $v = 0$, so your fuel economy is zero.

Realistic scenarios are more complicated but the long story made short is that the combustion reaction that occurs in the cylinder of the engine is much less efficient during periods of very high acceleration (i.e., near max load). More fuel passes through the engine unburned, or only partly burned, meaning you didn't extract as much energy from the same gallon of fuel. You're still going somewhere and your engine is operating at a higher thermodynamic efficiency due to the load placed on it, but in terms of fuel economy, that benefit is reduced by the cost of lower combustion efficiency. It is even possible, when combustion efficiency is very poor, for that cost to outweigh the benefit of high loading entirely. (This might be expected if the vehicle has been very poorly maintained. In reality, so much depends on the age of the car, the quality of its control units, the gear in which you are accelerating, that it's hard to make an exact prediction for a general scenario.)

The other thing I want to mention is that you have to consider where your power is going. "High engine loading" just means that a lot of the power the engine is capable of producing is being demanded; it doesn't tell you where the power is going. If it's going to fight drag, which increases as the square of velocity, then that's wasted power and wasted fuel. You can deliver it very efficiently but if it's not adding to the speed* of the vehicle, it's not contributing to fuel economy. It only looks efficient when you draw your system boundary around the engine and ignore the purpose of the car.

* Technically, we should consider elevation as well, but fuel economy is typically calculated in terms of horizontal path distance. Gains and losses due to change in elevation are either assumed to cancel out overall or accounted for with some coarse correction factor.

The plot in the question does not apply to the situation being asked. The power capacity of an automotive engine is dynamically changed while driving by both altering the RPM and by throttling the airflow in the intake.

The peak efficiency of a car engine is somewhere midrange, with inefficiencies under both high and low loadings. At 10% loading, the efficiency is still better than half what it is at peak.

But say then we're getting 10% efficiency at 34mpg.. There's no inconsistency there. It just means if you could somehow achieve 100% efficiency, you'd get 340mpg under that load scenario.

There is an ideal speed at which maximum mileage occurs... engine efficiency increases as load increases, however, air drag losses increase as the square of the speed.

There are two major reasons for the poor efficiently at low load:

Power generated by an engine is the product of angular speed by the available torque at that angular speed. The function of the gearbox is merely to match the engine speed to the road speed.

City driving mileage is lower than highway mileage mainly due to continuous braking which dissipates kinetic energy as heat, and idling at traffic lights or stop signs.

I know it's an old thread, but I can't resist taking a stab at it. Especially when there's so much bad or unrelated info in the other answers.

Bear in in mind that the chart shown relates to the thermal efficiency of the engine alone and doesn't consider a moving car as a complete system and also that the vertical axis appears to be labeled as a ratio rather than a percentage efficiency so 0.2 on the graph is equivalent to 20%

For a car as a whole, engine load is not independent of speed as drag forces tend to increase with the square of speed.

The main reason that IC engines have lower efficiency at lower loads is that a lot of the energy losses are fairly constant, regardless of the power being produced; these include the power required for things like air induction, pumping fuel, coolant and lubricants and powering electrical systems. So at lower power output these losses represent a much greater proportion of the overall power produced by the engine. For example, say that an engine has a constant requirement of 1 kW for all the ancillaries. If it is producing an output power of 1 kW then these losses are half of the total power being produced, whereas when the engine is developing 50 kW than they are just 2% of the total.

In a larger engine with higher power output these (approximately) constant losses will tend to be larger than in a smaller capacity engine.

Also, the efficiency of the engine doesn't relate directly to mpg. An efficient engine in a heavy car could still have higher fuel consumption than a relatively inefficient engine in a light car. To put it another way, mpg is related to how much energy you need to travel a certain distance but efficiency measures how much of that energy is wasted.

In the diagram 'load' is the torque produced by the engine. For the purposes of testing it will be connected to some adjustable load (e.g., generator and a bank of resistors). The power produced is this torque multiplied by the angular velocity (RPM). Note that all engines have a practical limit on RPM due to the acceleration forces on moving parts (especially valves and connecting rods) so the output power is a function of both the load and the RPM.

I can give you an analogy: For a DC electric motor, efficiency is highest at a point LESS THAN its maximum rated power. 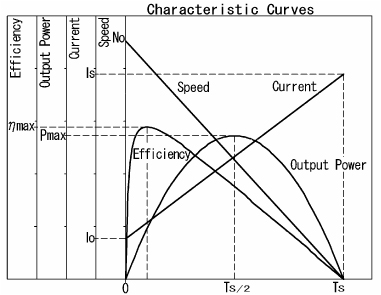 The loss mechanisms are friction from fast rotation, and magnetic core losses (current going through the iron alloy) as a torque-independent parameter. If it weren't for magnetic losses, the efficiency would be maximum at torque=0. So understand your own loss mechanisms of the motor and see if the same type of curve can apply.

Rephrasing your question:
1. How much energy does a car use at 60mph doing 34mpg?
2. What is its efficiency if it requires 20hp to maintain constant speed?

NB1: The quoted 240hp is the maximum OUTPUT power.

NB2: The % load in the diagram refers to maximum power at that particular speed. It is roughly proportional to volumetric efficiency of the engine, which depends on throttle position, valve timing and manifold resonance characteristics.

That chart is suspect. If you look at the Web page it was taken from, it is clear that the author of that page does not understand the basic terms that he is using, like "load", "power", "torque", etc. The chart may be correct if we interpret "load" as "torque", as it is well known that engine efficiency improves as torque increases and spin decreases (hence, we have "overdrive").

To summarize, engine efficiency is determined, in descending order, by:

Not the answer you're looking for? Browse other questions tagged mechanical-engineering automotive-engineering fuel-economy or ask your own question.

2
Why the word “mileage” is used for vehicles, instead of efficiency?
0
What are the reasons that engine efficiency drops in low loads?

4
High spindle speed, low tool pressure
2
How much load can a tractor tow uphill?
4
How efficient is the opposed cylinder combustion engine design?
0
What are the reasons that engine efficiency drops in low loads?
1
How to make screws stay tight under high vibration?
2
How much air will an engine use per tank of gas?
2
Calculate maximum acceleration of a car from rest (optimum launch)
1
How to calculate the output power of engine exhaust
0
compression buckling under lateral load