How to install a wired sensor in a rotating bin without tangling the wires? 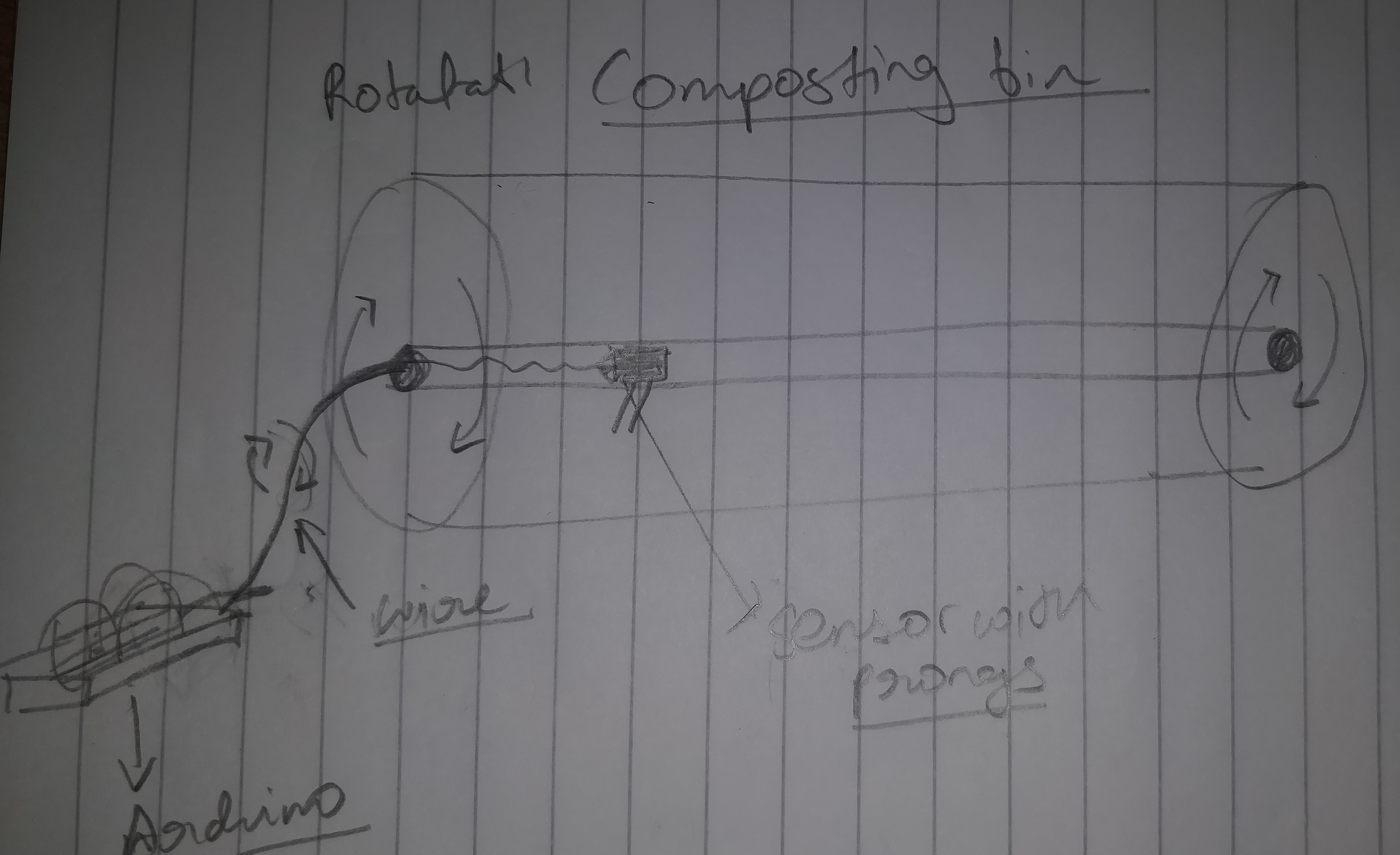 I want to insert couple of moisture, temp and humidity sensors in this bin to take readings from the compost.

But how do i install it without turning/tangling the wires?

Can anyone help me figure a solution I am not an engineer but I am trying hard to solve.

There is a device called a slip ring which does what @Solar Mike describes. They can be fairly cheap if obtained on the surplus market or even purchased new from here or here. They can be either hollow or solid shafts. Solid shaft models can be used as part of the axle (if mechanically strong enough) while the axle can pass through the middle of the hollow shaft varieties.

Put a disc on the side of the drum centered around the shaft it rotates on and have two, three or four concentric copper tracks for carbon brushes to rub on, spring loaded and they should work fine.

Slip rings are a straightforward solution to the problem, so long as the electrical noise they generate is small compared with the signals you want to measure.

Since you are already using an Arduino, you might consider an alternative, which is to have a second, battery powered, Arduino attached to the rotating drum itself, and use that to transmit the data to an external computer wirelessly, for example using a Bluetooth data link.

I'm assuming the composting bin only rotates slowly, to mix up the contents, so there would not be any mechanical problems with a relatively large unbalanced mass (i.e. the Arduino) attached to it. But this "rotating transmitter" concept is used successfully in situations where the environmental conditions are very hostile (e.g. rotational speeds of the order of 10,000 RPM, high temperatures, and a corrosive atmosphere which would quickly destroy slip rings) - using purpose-built transmitters though, not an off-the-shelf Arduino.

This clothes dryer has conducting bands around the drum with wire brushes (#16 in diagram) "in order to transfer the inputs from the sensors in the baffles to the control board".

Commutating slip rings will work but another option is to use a slew ring for the main bearing of the drum: 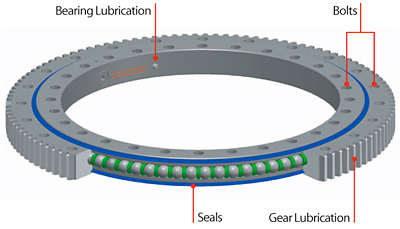 The sensor wires and mounting can then extend to outside of the bin and not therefore not have to rotate at all... (there is no shaft in the way)

The other end can be a traditional shaft and bearing if required.

They're expensive new (but so can be slip-rings) - suggest you look at surplus/old spare stock on ebay etc.

Additional to the slip rings solution, you can easily find wireless sensors on the market. Which I personally find much more easy to implement.

A rotary transformer https://en.m.wikipedia.org/wiki/Rotary_transformer could be an option. You may use one channel to take some AC power supply to the moving side, and conversely one or more channels to bring back some kind of serial data. Some simple electronics should be installed in the rotating part to condition power supply and communications. Rotary transformer itself could probably be a relatively low specs one and hence could be a home made one.

I suggest having a fixed shaft, with two bearing where it carries the drum. The drum can be driven from the outside with a roller, belt or similar. That way you don't need so many slip rings and no wireless connections.

Not the answer you're looking for? Browse other questions tagged electrical-engineering environmental-engineering or ask your own question.

4
Focusing light from a laser shot into one point
3
Autonomous RC car trying to stop at a point
3
Send sensor signals to WiFi network
0
How to determine motor needed for water pump
2
Cruise Control Project on Toy Car
3
Basetech BT-305 missing resistor
16
What is it about the cabin electrical supply on cruise ships that makes surge protectors dangerous?
0
Electrostatic wand to attract pet hair