A foam which I have performed compression tests on shows results similar to the following hysteresis cycle: 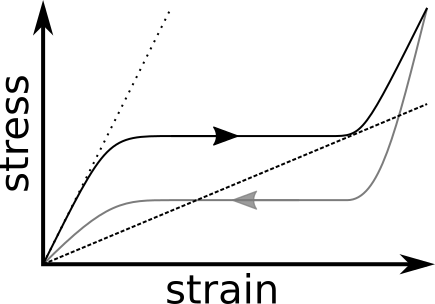 (Note that the first bend in the graph is not the yield point; the hysteresis cycle returns to the origin.)

I would like to characterize the compressibility of the material using a commonly used statistic.

The Young's modulus is an obvious candidate (see dotted line), but it doesn't really capture the characteristics of the material when you compress it further.

Instead I had the idea of using the dashed line: the minimal value of stress divided by strain over all values along the curve of the compression. However, I don't know whether that is a commonly used statistic to describe compression of foams.

What commonly used statistic best describes the compression behavior of a foam at higher strain values?

Material science can almost always be broken down into "generally useful" and "specifically useful". The link in the comments demonstrates a commonly used statistic that describes behavior of foams at higher strain values - the three dimensional strain energy density function. But this statistic is "generally useful". It generalizes to all foams.

In specific circumstances, you may find that you design your own tests to reflect a specific loading you need to test for your design. These later become specific ASTM procedures that people can utilize to check the quality of foams and guarantee similar performance. For example, one method may simply be to run an integral of the area under the stress-strain curve. This energy is not the same as the stress energy density function, because your anisotropic material is not charachterized in all three dimensions, but the resulting energy difference would nevertheless be a useful mechanic to determine how much energy the foam can absorb from an impact. Such an energy is typically called the toughness, and the full value is known as the modulus of resilience. A specific test of a specific sized sample of foam could be utilized to find the toughness as a function of compression force, and compare it to a known good sample. Such a test would easily be characterizeable and usable for the industry.

0
Convert translational stiffness to rotational stiffness of a screw
1
Asymettric stiffness matrix for a generator-gearbox-turbine system
1
Stiffness Tensor in Two Dimensions
0
Plane Strain in Anisotropic Materials
1
Axially loaded member with a spring / Mechanic of Materials
2
Brittle = highly stiff but not very strong
7
Why does a jumping rope have no bending stiffness and compression stiffness?
1
Difference between Stiffness (K) and Modulus of Elasticity (E)?