I'm currently looking around for a new bike and I've noticed lots of load-bearing carbon parts (frames, cranksets, forks etc.) with an interesting finish like this: 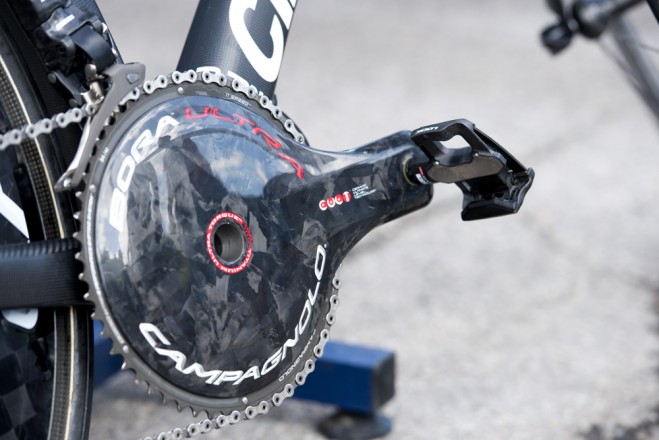 and I was wondering what this type of carbon cloth is called and why it's used. I've seen it used on parts (e.g. forks) where the forces are predictable (laterally during cornering or longitudinally during braking) and thus unidirectional or woven cloth would appear to be the best option from a specific stiffness perspective. It does look pretty cool and thus presumably has marketing value but other than that, I'd appreciate any ideas! 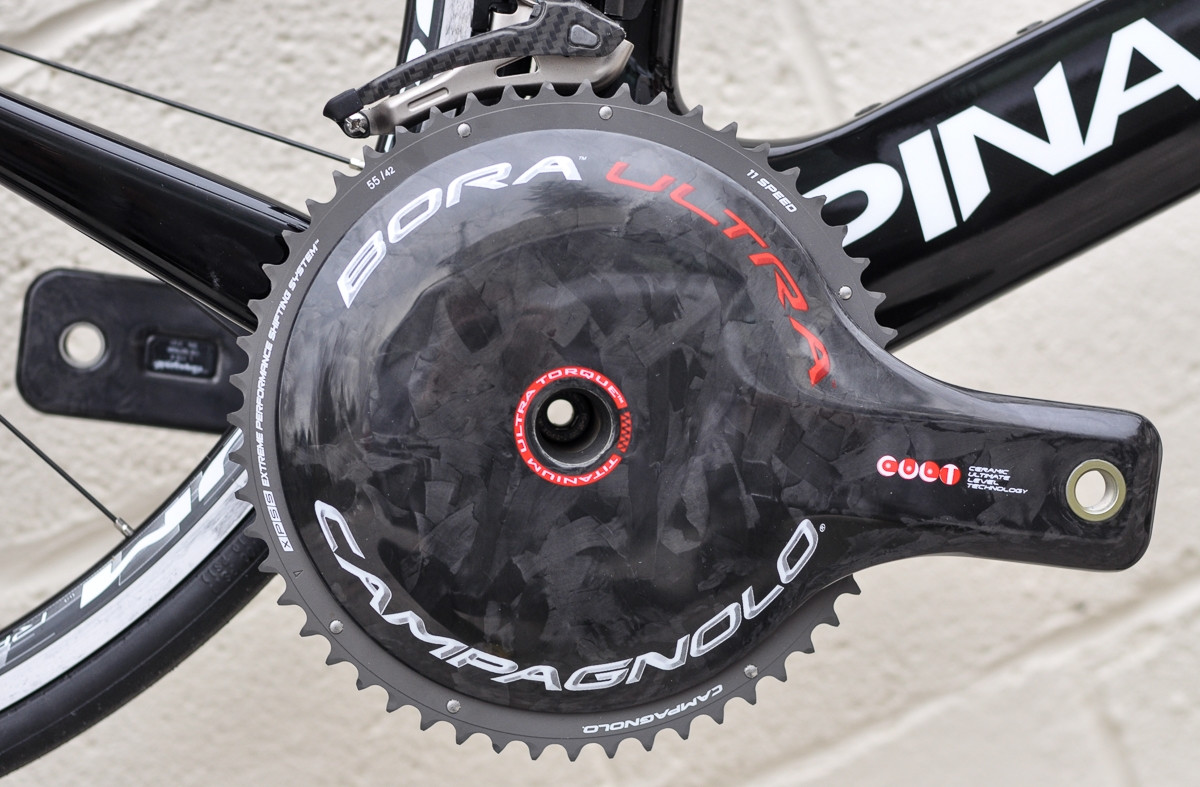 Reading the campagnolo website it does seem like they are carbon fibre. I would guess that they used a prepreg moulding method to create the hub. Moulding prepreg allows fibres in all directions so you get maximum bending and torsion resistance, as well as great strength-weight characteristics. If you sand it down you won't get the fibre look that cfrp is famous for, and you can give it a finish for the shine.

After some more searching, I think that the above material is a carbon-based 'forged composite' as shown in this Google image search query.

It was apparently developed by Lamborghini and Callaway Golf, who both use it in their products, and is composed of carbon strands in a resin matrix. It is injected or laid up as a malleable paste which is then presumably cured to produce the final product.

The advantages over regular carbon cloth are presumably lower layup costs (this stuff can be injected and doesn't need labour-intensive hand layup) and easier production of small and detailed pieces that are hard to form with cloth. The main disadvantage is presumably a loss of specific stiffness due to having no control over fibre orientation in the final product.

And if you're really interested, here's a good paper from the guys who developed it about using it in the new Lamborghini.

looks like (hex mc) made by Hexcel. it is a (quasi isotropic) laminate pre-preg of random carbon fiber tape. http://www.hexcel.com/Products/HexMC-Materials-for-Industries

The forged composite material used by Lamborghini and Calloway (a.k.a. "forged carbon") has a higher modulus and tensile strength than other composite materials like glass fibers and even traditional carbon fiber composites made with twill or satin weaves. The "randomness" of the fiber orientation in the "forged carbon" composite produces a stronger part in terms of flexion resistance, Young's Modulus and tensile strength. The method used by Lamborghini for things like driving compartment shells and certain structural and suspension components is comprised of pre-fabricated sheet material made of a vinyl ester resin and short length (i.e. chopped) carbon fibers which are pressed (where the "forged" term comes into play) into molds under pressure and heat (similar to how pre-preg is used). The small-random fibers also allow for more complex shapes to be formed as compared to traditional carbon fiber twill fabrics.

According to Wikipedia the composite is a novel construction using carbon fibers interleaved or layered with graphite sheets, all mixed with resin paste. The mixture is molded and cured simultaneously. Essentially compression molding but with a different raw material. It is not clear how the raw material is produced initially, and it is likely all we can do is speculate.

If the graphite sheets were aligned with the surface it might give the appearance you see, since each would be slightly out of alignment with the surface by different amounts, and reflect light at slightly different angles. The two photos show that effect when compared to each other. To me the surface doesn't look like fibers, but like fragments, though we would need a closeup to be sure.

Alternatively, it could just be a thin layer of randomly oriented chopped carbon material at the surface for show. Whether it looks good or not is another question.