I'm trying to determine whether it would be possible to use multiple power outlets in vehicle to increase the wattage that can be obtained.

This question is driven from a desire to install an DC to AC inverter without having to connect directly to the vehicle battery. Typically, the units sold that plug into the cigarette lighter outlets in a car max out around 150 watts. Some simple math suggests that, even with a 20 amp fuse, the maximum wattage you can draw from the outlet -before blowing a fuse - would be 240 Watts (12V x 20A = 240 W).

However, if there are multiple, separately fused outlets available, can they be connected in parallel to increase the available power? For example, could two outlets be used to supply up to 480 watts of power?

It seems simple in theory, but I'm certain there are some more complicated aspects to be considered. I realize that the length and resistance of the supply wires are a factor, and that if the voltage isn't balanced, then one leg will supply more amperage than the other. However, I believe this would really only be an issue as you started to approach the upper end of the amperage limit for one of the legs. Once one of the legs maxed out, the fuse would blow, transferring the entire load to the second leg which would also blow quickly thereafter. But up until that point, both legs would share some level of the load.

I've included a simple schematic that I sketched for a visual aid.

Any educated feedback or explanation would be greatly enjoyed. 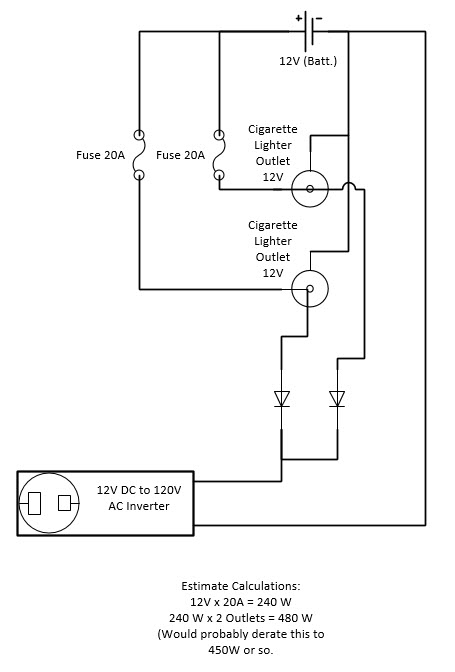 It is possible that the outlets you want to pair together may have the same supply : relay and / or fuse...

You should connect a set of wires with appropriate fuse directly to the battery, if this is for short periods of use otherwise you will end uo with a flat battery.

The best solution is to fit a second battery, run the inverter from that and have a split-charge system to charge the second battery when the engine is running.

0
How to calculate the power/torque/force needed to move a 4 wheeled vehicle?
16
What is it about the cabin electrical supply on cruise ships that makes surge protectors dangerous?
2
Can I connect a power supply main (SPH) and inverter main (SPH) with common neutral to a TP MCB?
0
Electrostatic wand to attract pet hair