I have recently been working on a gearbox for a robot. I have this pattern of 4 gears with each gear connected to its 2 neighbors. It looks like this: 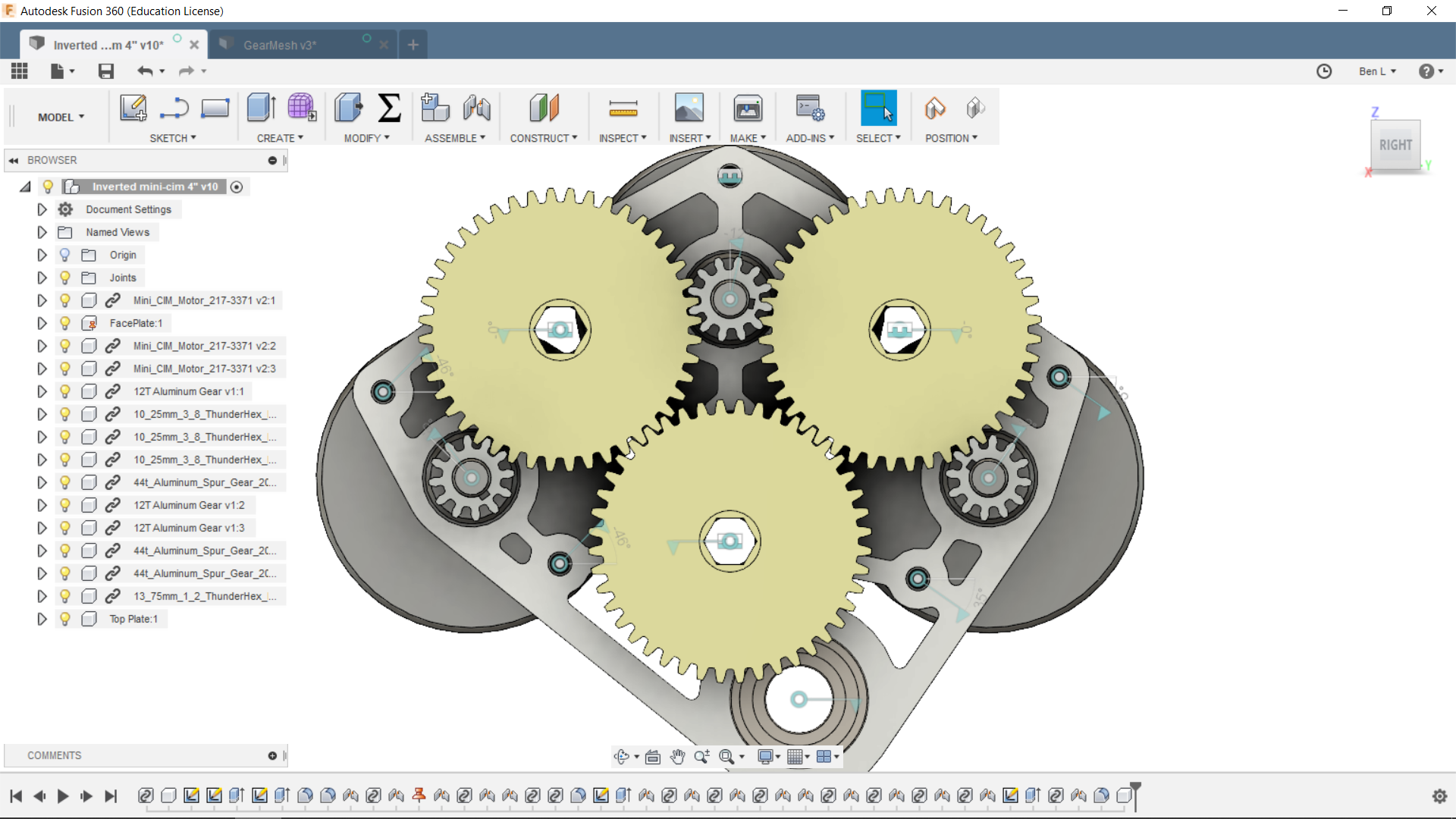 You will probably notice something though. Large gear on the right and the small one in the center do not properly mesh. I made sure that the center to center distance of the all the gears was the sum of their respective pitch radii so that is not the issue: 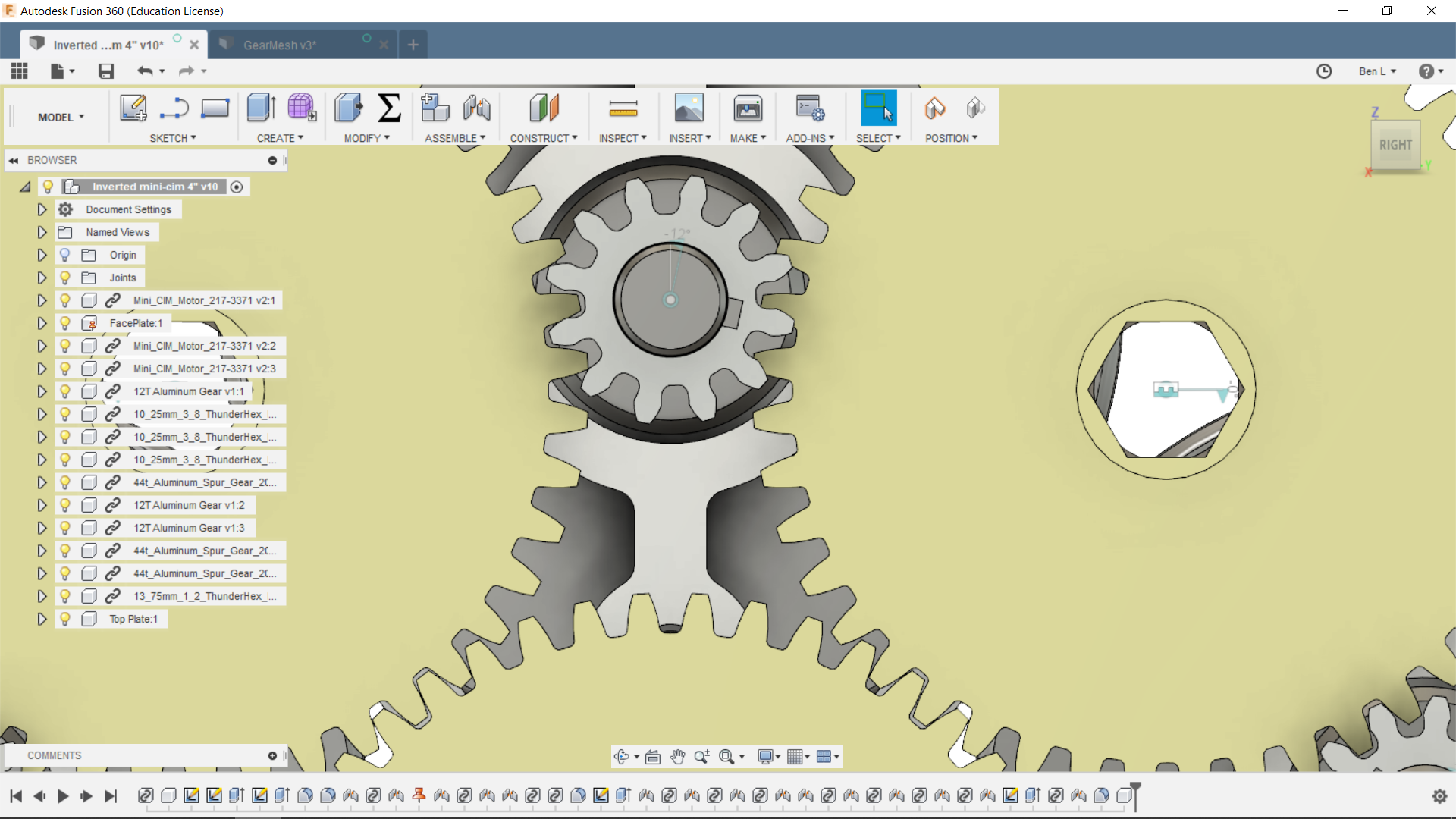 There only seems to be a few positions where the gears engage one another properly. By moving things around and eyeballing it I got a set of constraints where everything appears to mesh properly but it is unlikely that it is perfect: 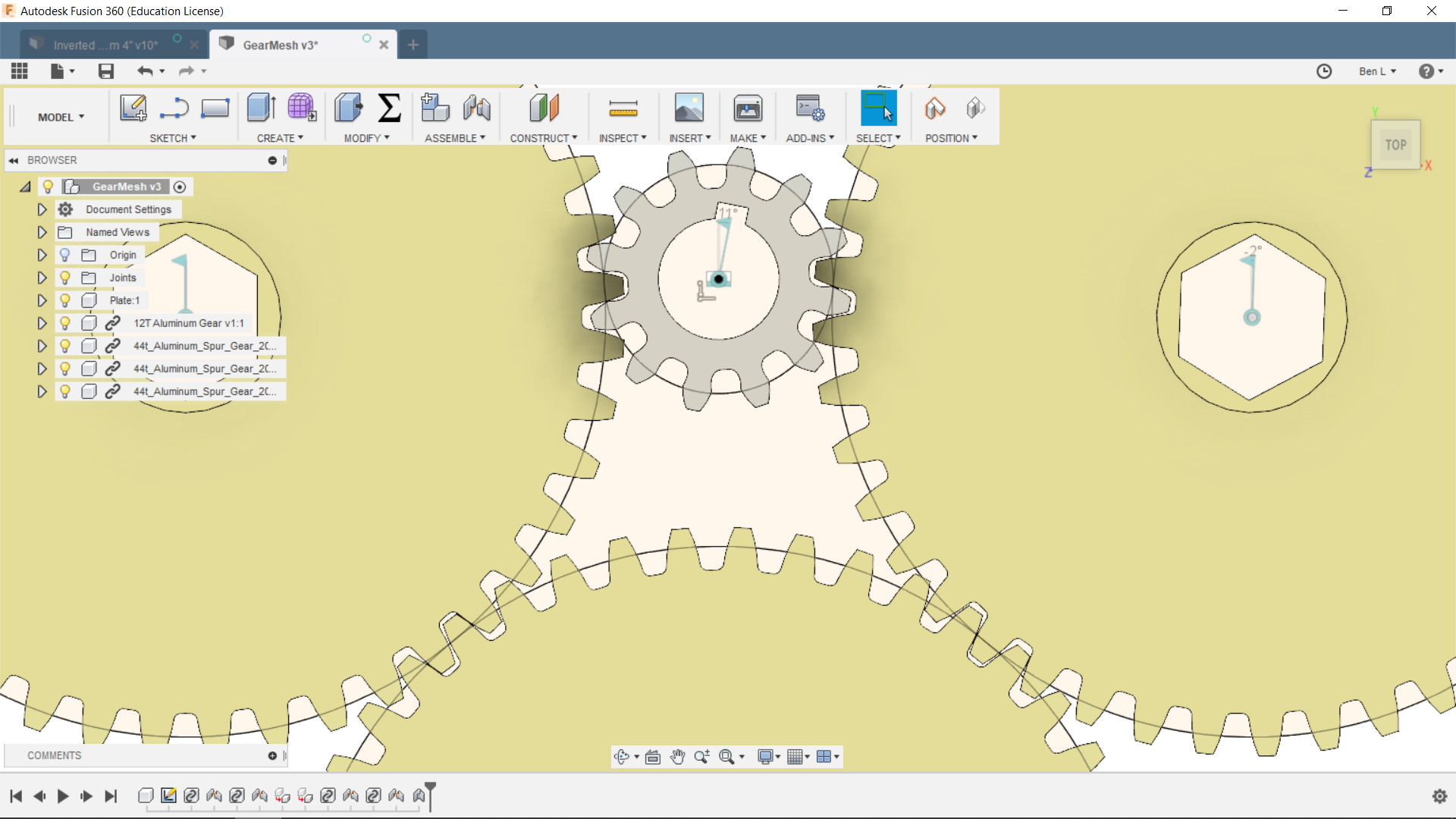 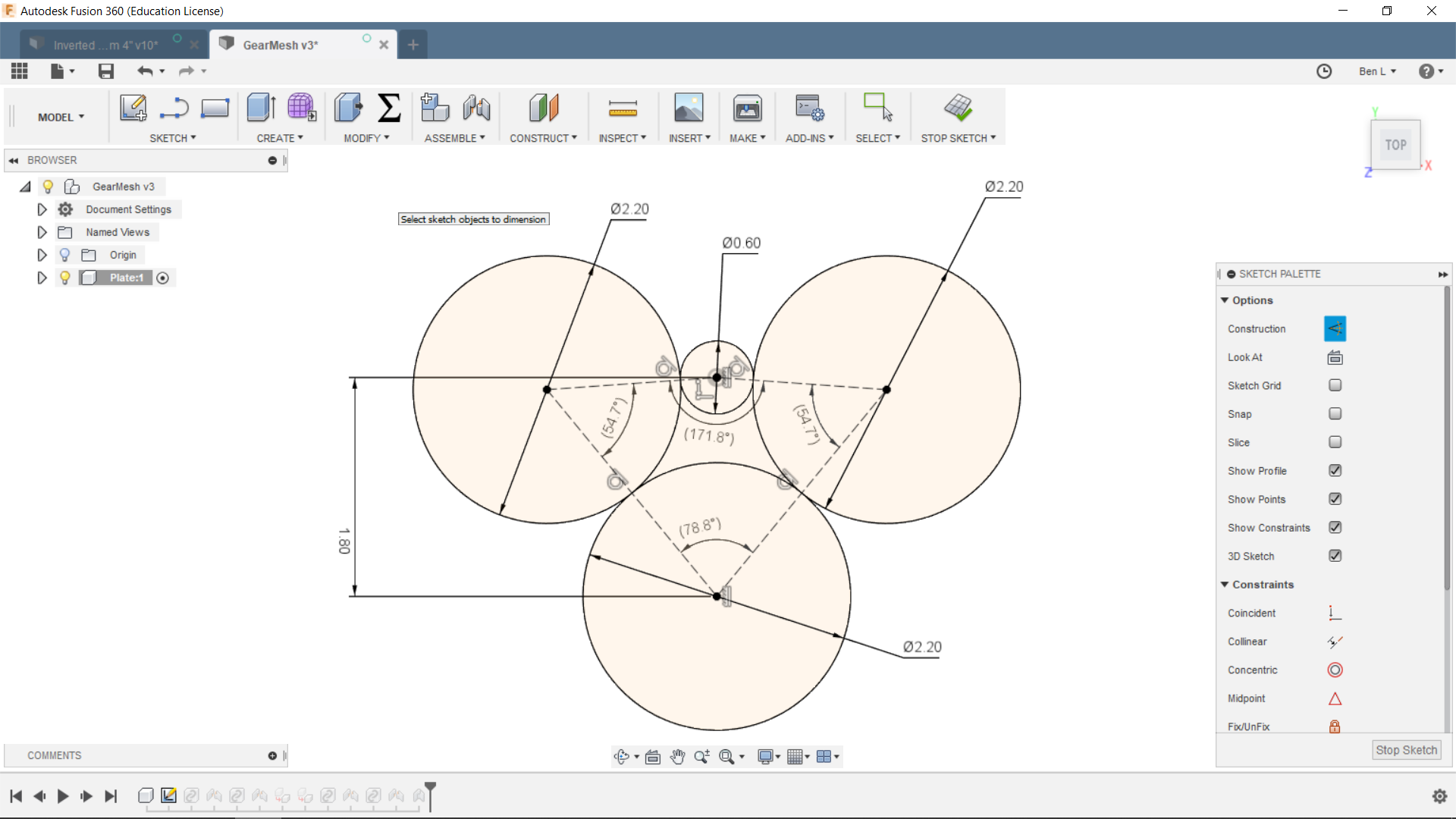 So my question is how do I calculate distance between the small gear in the center and the large one on the bottom so the gears will all mesh properly. I don't like eyeballing it because I don't think the gears will mesh perfectly. Also, it makes it harder to improve my design if I can't make these calculations.

Some specs on the gears:

A similar question that got no answer: How to find angle of timing gears

Let’s consider gears as being represented by a pitch circle on which lie several equally spaced dots with a number equal to the number of teeth. These dots can either represent the teeth or the gaps between teeth, and they follow the rule that, as a pair of meshing gears rotate, the dots of one gear will coincide with the dots of the other gear as the dots pass the point of tangency of the pitch circles: 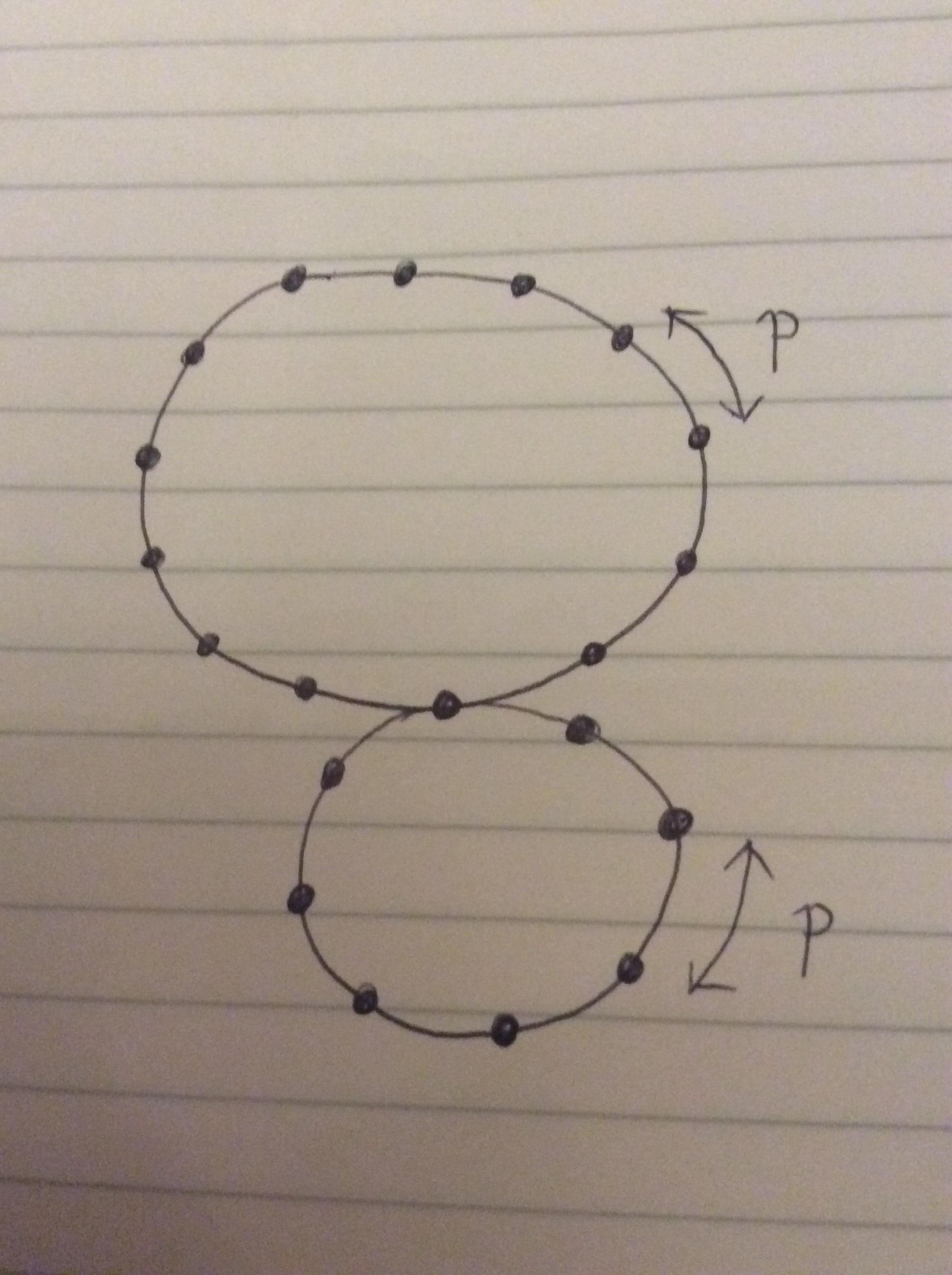 The distance between neighbouring points measured along the pitch circle is the circular pitch $p$ for both gears. 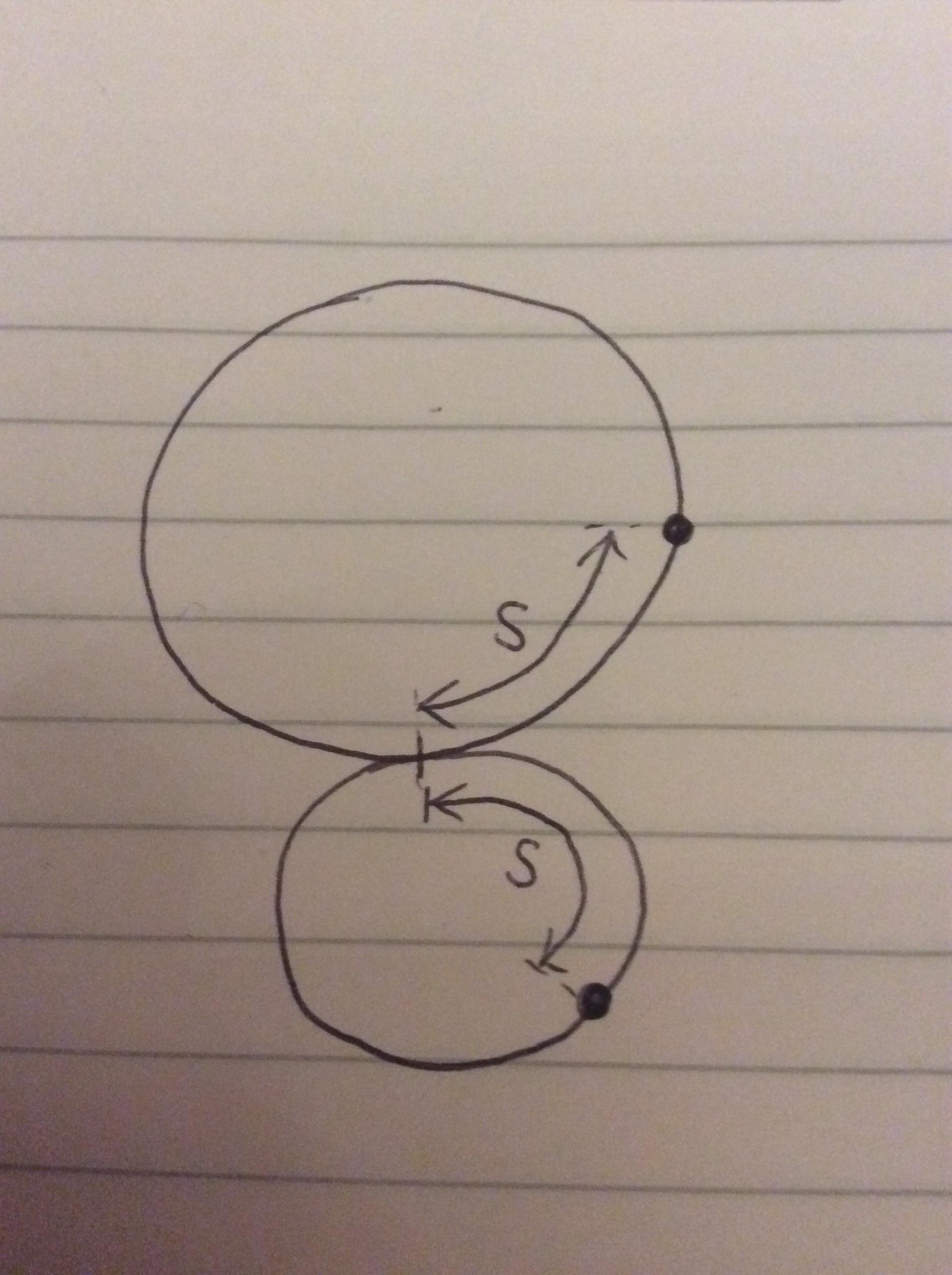 That is, if a dot on gear 1 is an arclength $s$ away from the pitch circle tangency point, there will exist a corresponding dot on gear 2 that is also an arclength $s$ away. We know this to be true since rotating the gears result in moving the dots by the same distance along the pitch circles; corresponding dots will coincide at the tangency point, and a rotation of the gears will move both dots by $s$. Care is to be taken in the directions of rotation.

We can use this information to consider tooth spacing for a closed loop of four arbitrary gears: 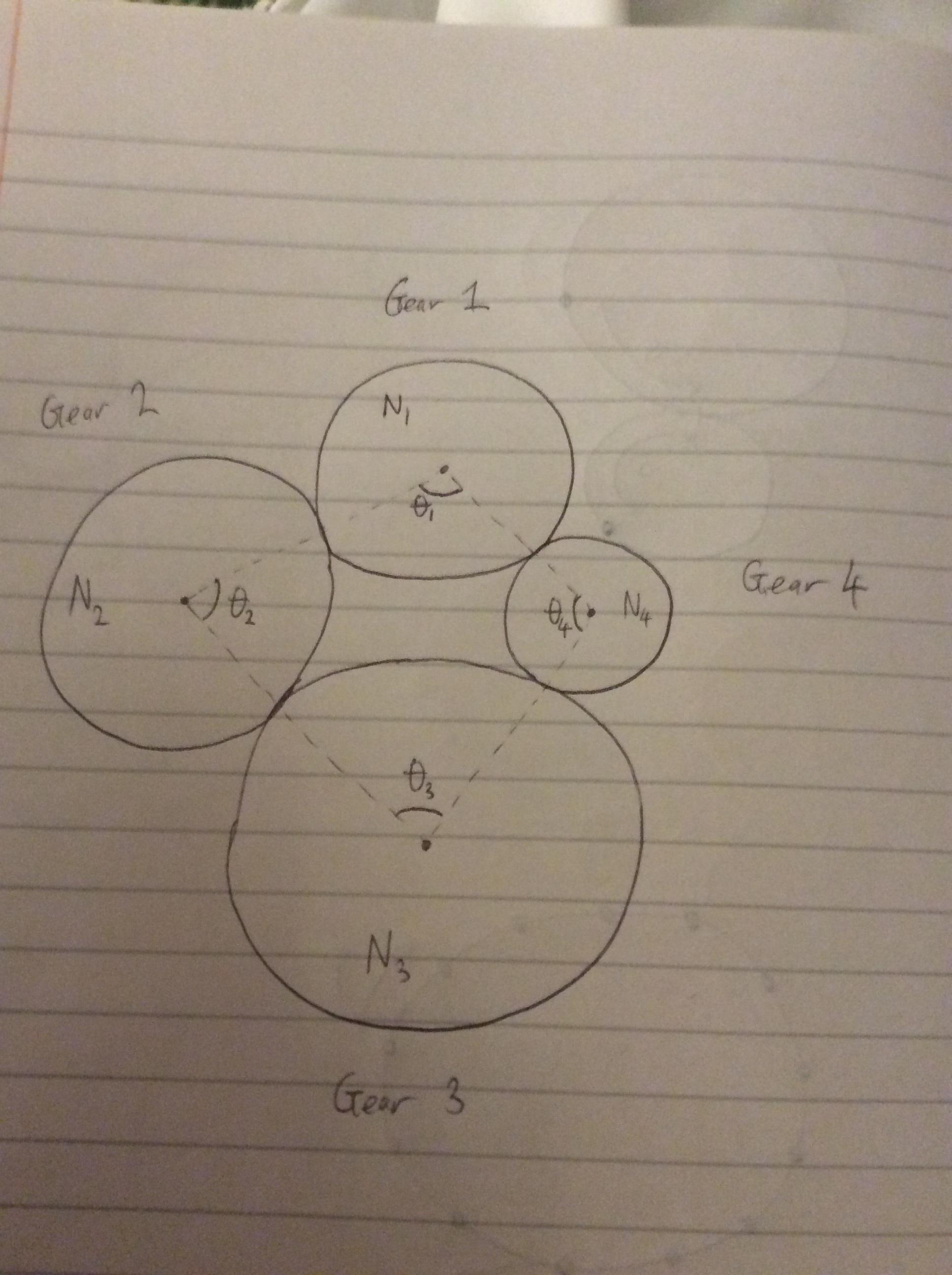 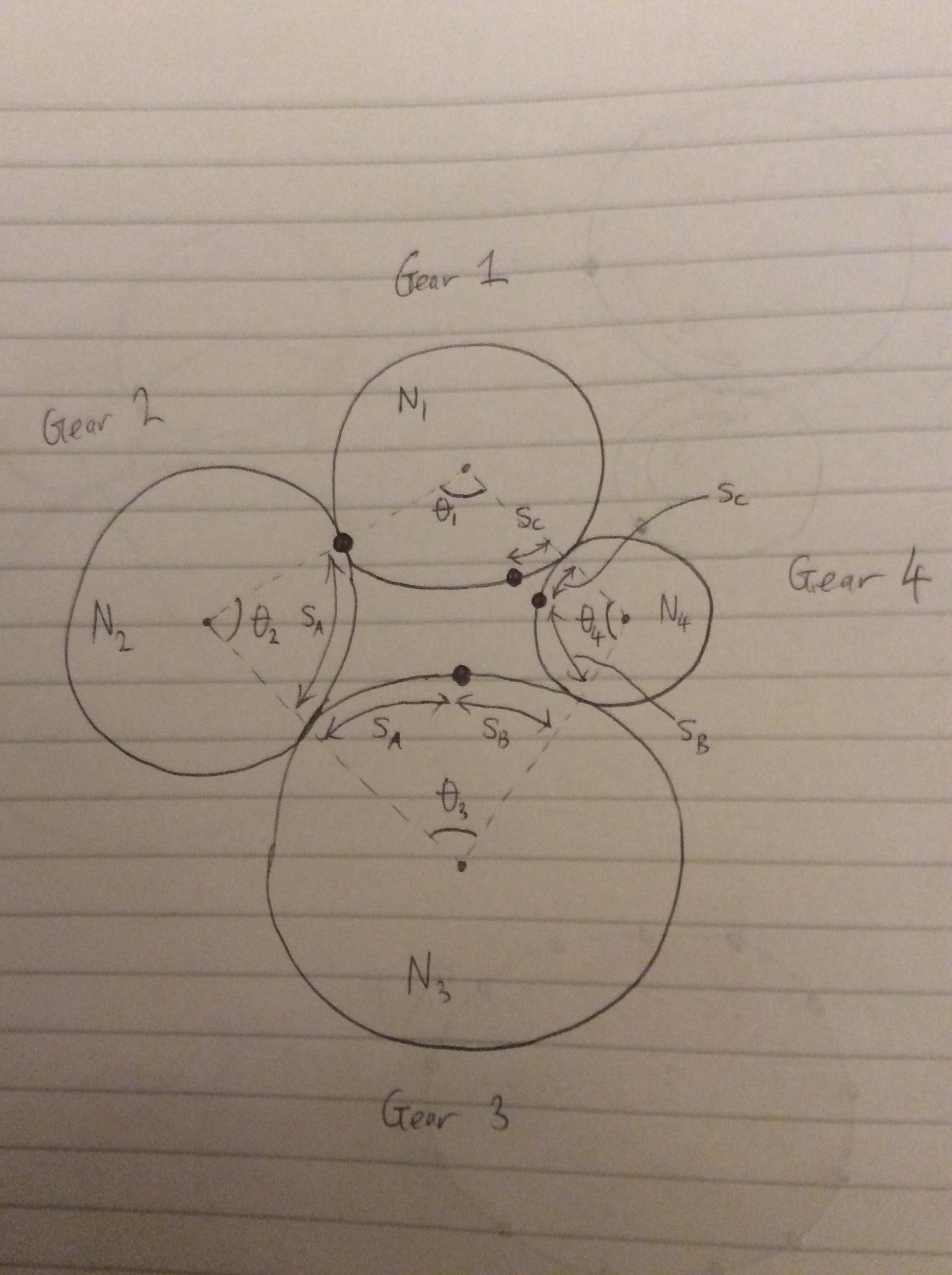 Note how the arclengths are related to the radii of the pitch circles $r_i$ and the internal angles $\theta_i$. This yields the equations:

Elimination of the unknown arclengths leads to the following condition:

By noting that the radius of each gear $r_i = N_i p/2\pi$, this condition simplifies to

Therefore, for gears of given numbers of teeth, you need to alter the interior angles of the closed polygon such that the above condition holds for some integer $z$, which may be positive, negative or zero.

Find a geometrically valid set of internal angles that obey this rule, and the teeth should all mesh. Once you know the internal angles, you can determine the distance between the top and bottom gear.

This rule can also be generalised to any closed loop of an even number of gears, where the rule can be expressed as

3
How to find angle of timing gears

3
How to find angle of timing gears
3
3d model gear to fit another gear
5
Involute Gear Calculation
7
Involute gear curve when root diameter falls below base diameter
3
Center line to centerline of pivots for two 16 diametrical pitch gears. One gear 72 tooth other 36 tooth
2
Trouble with Base circle and meshing with spur gears
1
How to I determine the dimentions for a worm gear?
1
Calculating and Designing a Ring Gear for LEGO
0
How to scale up a gear's diameter, increasing number of teeth and keeping teeth size constant?