Deflection of a stack of disks under applied force/pressure

I'm trying to calculate the deflection of a stack of metallic disks, when subjected to a force.

In the case of the figure below, representing a valve for a shock absorber, the force is due to a pressure differential. The stack of disks (also called "shim") is represented in orange. 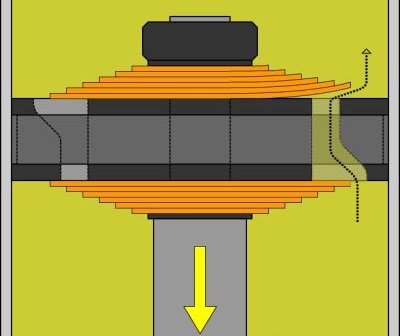 I found a couple of papers that delve in this theme, but they all seem to be a direct citation of the following paper: "An Experimentally Validated Physical Model of a High-Performance Mono-Tube Damper", by Michael S. Talbott and John Starkey.

They briefly exemplify for a 3 disk stack, but actually explain very little of the method of computing the deflection of the stack as a function of force.

Using Roark's formulas for disk plates and the superposition method, one can obtain a system of equations to be solved, akin to:

I'm having trouble however in determining how the disks transfer forces between each others. It is assumed that two different disks only touch at the tip of the smallest one, the pressure difference is known and by using Roark's formulas one can calculate the reaction force at the base of one isolated disk.

I'm however unsure on what amount of force is transferred between disk 1 and disk 2, disk 2 and disk 3, etc.

Are there any papers or books that described this problem or a similar one (stacked disks, stacked beams, stacked plates, etc.) and that illustrate the solution method in greater detail?

Between disc 1 & 2, there is a reaction force on disc 1 which is not going to act on the edge rather at the distance of 2nd disc edges.

This means you need to have the model of 1st disc bending developed for 2 cases,

For the 2nd disc, you have 2 cases

For each disc, the effective deflection is calculating by summing up both cases... Keep in mind the the reaction from disc on top produces negative deflection...

Keep building the equations and there you will see you end up with system of equations which can be solved by any mathematical methods, gauss jordan or something...

Finally you get the deflection @ disc 1 on the edge which is the requirement for your analysis.

I hope this helps.

If we use this just as a rough model the m affecting each disk gradually becomes smaller as we go up and radius of curvature bigger. So it is safe to assume only the outer edge of each top disk touches the lower disk.

Not the answer you're looking for? Browse other questions tagged mechanical-engineering structural-engineering valves deflection deformation or ask your own question.

3
How to calculate filament deflection and force applied to teeth by toothbrush bristles?
4
Round beam deflection under its own weight
0
Why does rebar in reinforced pre-stressed conrete reduce in deflection if compressive stress is applied to member?
0
Force applied to a cam follower
1
How to determine the deflection of a wire mesh under wind load?
2
Bending behavior of built-up C-Channel
1
How can deflection and spring constant of cantilever beam stack be calculated?
0
Describe the magnitude of a force using real-life comparisons instead of numbers