Why do springs get harder to compress?

I was playing with a spring, and realized that I've never wondered why a spring gets harder and harder to compress the more you try to compress it.

It seems easy at first though. What is the scientific explanation behind this?

Edit, just to note some compression coil springs are designed so that the initial travel is at one rate , then further travel is at a higher rate - commonly used in suspension systems on cars to prevent or reduce “bottoming” ie the spring to become so compressed it is solid.

There are different designs of springs, with different properties: 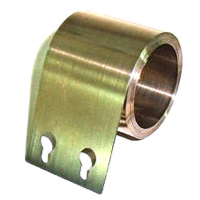 The extension type of constant force spring represents the most basic, yet most versatile, type of constant force spring. It is a pre-stressed flat strip of spring material which is formed into virtually constant radius coils around itself or on a drum. When the strip is extended (deflected) the inherent stress resists the loading force, the same as a common extension spring, but at a nearly constant (zero) rate (change in load per unit deflection, generally given in pounds per inch).

A constant torque is obtained when the outer end of the spring is attached to another spool and caused to wind in either the reverse or same direction as it is originally wound. The full rated load of the spring is reached after being deflected to a length equal to 1.25 times its diameter. Thereafter, it maintains a relatively constant force regardless of extension length. Load (force applied to a spring that causes a deflection) is basically determined by the thickness and width of the material and the diameter of the coil.

A compression spring is an open-coil helical spring that offers resistance to a compressive force applied axially. Compression Springs are the most common metal spring configuration and are in fact one of the most efficient energy storage devices available.

Helical springs used to apply a torque or store rotational energy are commonly referred to as torsion springs. The ends of torsion springs are attached to other components, and when those components rotate around the center of the spring, the spring tries to push them back to their original position. Although the name implies otherwise, torsion springs are subjected to bending stress rather than torsional stress. They can store and release angular energy or statically hold a mechanism in place by deflecting the legs about the body centerline axis.

Comparison of the force applied vs. amount of movement.

The question is answered, but not demonstrated by example. The clue surely, is in the fact that compression spring loading is given as force/unit travel. So if it is loaded with 1lbf and the spring compresses 1 inch then the spring has a linear “rate” 1lb/inch. To compress the spring further, say another inch, then you would need to add a further 1lb weight or apply a further 1lbf. Ergo, the further the spring is compressed the more ‘force’ is needed to achieve it. “It becomes harder to compress”. RC (retd C Eng)

RonRon
1
New contributor
Ron is a new contributor to this site. Take care in asking for clarification, commenting, and answering. Check out our Code of Conduct.
$\endgroup$
Add a comment  |

Not the answer you're looking for? Browse other questions tagged springs or ask your own question.

0
What is the simplest spring system that could produce recoil absorption comparable to that exhibited by the AA-12 assault shotgun?
0
Arc subtended by stretching of a conical spiral spring
2
Repairing blind in bathroom: How do spiral springs with 3 revolving drums work?
1
How to build an Adjustable Tension Spring?
3
Reverse Suspension Spring
4
What is the purpose of dead coils in the middle of a compression spring?