What exactly is the thin wall assumption in regards to beam cross sections?

What does it mean with respect to calculating stresses on a beam undergoing loading and when should it be applied?

The thin-wall assumption is relevant when calculating stresses due to shear and torsion.

This is because shear and torsion generate shear flow through the cross-section, as seen below: 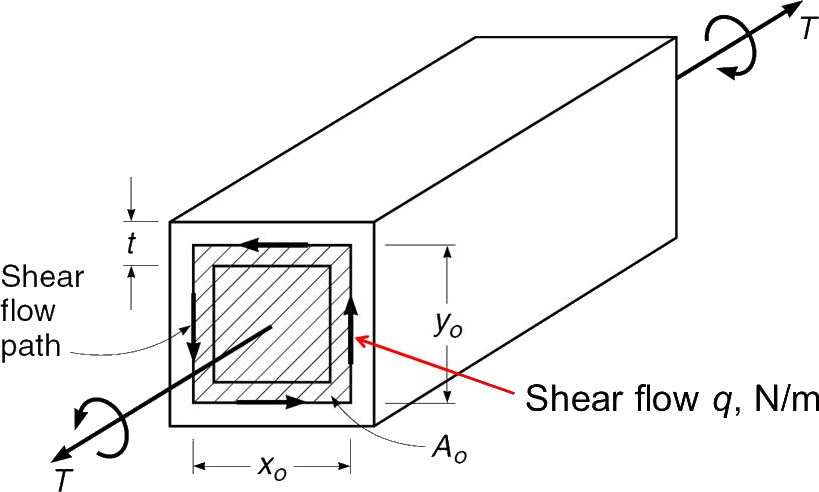 For any given segment of the section (for example, each of the sides of the box section above), it's obvious that the total shear stress "going in" is the same as the stress "going out". However, how much of that stress is found near the outer face, near the inner face and around the middle?

Honestly, that gets kind of messy to calculate, so instead the "thin-walled assumption" is made instead. We just assume that the thickness of each of the walls is so small that whatever variance there is through the wall can be ignored. Put another way, it assumes that the shear flow is uniform throughout each of the walls.

As far as I know, there is no formal definition of when a wall can be considered thick or thin, but a common one is $d/t>20$ (seen here on Wikipedia), where $d$ is the section's width or diameter, and $t$ is the wall's thickness. That being said, I've seen the thin-wall assumption used in sections with $d/t=10$ as well.

The example I gave above is of a closed thin-walled section, but the assumption can also be made with open sections (I, L and T sections, for example). Obviously the solution for the shear flow is dependent on the cross-section, but closed sections perform drastically better under torsion than open ones.

I would guess (please provide a reference for your question) that it means you can assume all the nice simplifications which allow the problem to be solved by hand.

You can also look for Bernoulli/Euler. A more advanced beam theory is provided by Timoshenko.

Over at rearchgate a similar question was asked.

Not the answer you're looking for? Browse other questions tagged structures stresses beam or ask your own question.

6
What is the mathematical derivation for shear center of a beam?
3
Why do we assume the moment is zero when analyzing a simply supported beam?
2
Twist "buckling" critical load
1
Fixed-Free End Column Design
1
What is meant by the rotation capacity of a cross section?
1
Simple cantilever beam deflection - what is the simplest way to add a damper?
0
Stresses due to combined loadings in a bent shaft supported at both ends
2
Is bending moment along a beam independent of the cross sectional area of the beam?
0
Why can't I-beam resist torsion but can resist shear stress due to transverse loading?