What happens when pumps are blocked off?

What will be the result if the pipe losses is greater than head produced by the pump?

What will be the result if outlet is closed?

If losses exceed head then there won’t be any flow or if the head exceeds losses at start and then the losses increase then the flow will fail.

This is why the losses are calculated then the pump size chosen ...

Related: System curve for use in determining pump operating point

As such, a system with a very long pipe simply develops weaker and weaker flow, but the flow will continue. For example, if the system were to flow, and you added more frictional pipe losses by closing a throttling valves, the system would throttle, obviously. The flow rate would diminish. In theory, so long as the valve was still open, the flow rate would be non-zero for a system that only cared about frictional loads. But there are also gravitational loads/losses.

Gravitational loads, on the other hand, are not a function of the flow rate - to raise the fluid level 10 meters, the pump needs to supply enough pressure to counteract the gravity-induced pressure (called head) at the other end of the pipe.

We can then see that if the pump cannot overcome the gravitational load, then the pump will simply raise the height of liquid in the pipe until it stops going higher. If the inlet was a reservoir and the outlet was simultaneously a reservoir, the difference in height would remain unchanged while the pump was running. This would be a system in a quasi-static equilibrium, and as such pump manufacturers call this system a "Total static head" (though others call it a Total dynamic head), and is a useful test for defining the pump curve: 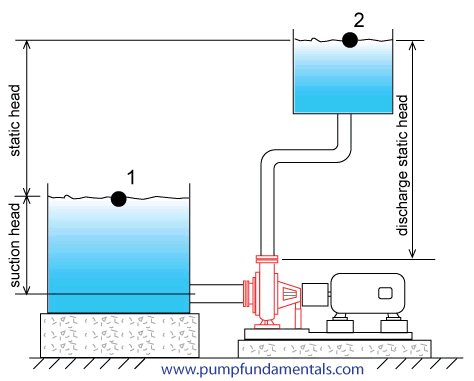 While this is useful for testing, it can be impractical to have a reservoir several hundred meters above the pump (for some pump types). In these cases they can substitute the reservoir with a pressure vessel and a pressure gauge. This leads to your final question - what happens when the outlet is closed - it's the same thing. However, it is unwanted in applications, and in actual project design, it is given a more ominous name of "dead head" in this situation. This is because the impeller is simply twirling in a non-flowing fluid, and any heat generated by the impeller due to inefficiencies and entropy generation simply stays close to the impeller, unable to flow out into the fluid via convection. This can damage most pumps and is usually avoided at all costs.

Not the answer you're looking for? Browse other questions tagged mechanical-engineering pressure pumps hydraulics temperature or ask your own question.

4
System curve for use in determining pump operating point

5
What are the predominant types of concrete pumps and what are their working mechanisms?
0
Centrifugal pumps working
0
Pump power and fluid viscosity
1
Calculating Minimum Pipe Pressure Requirement for an Irrigation System
1
Pipe network analysis: static pressure of a closed-loop pipe
1
How to calculate a circulation pump size?
0
Will water flow into a tank connected to a hole in a pipe?